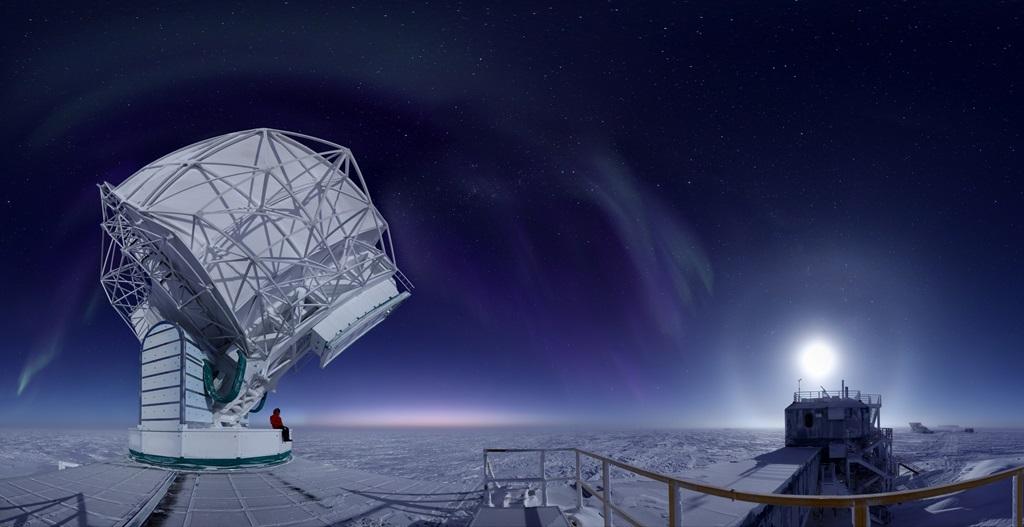 Scientists are planning to upgrade the South Pole Telescope's camera for the third time in December 2016. (Jason Gallicchio)

Scientists at the University of Chicago are hoping a new, highly sensitive camera they’re developing for the South Pole Telescope will unravel mysteries of our early universe.

The telescope is the largest in Antarctica (it's nearly 33 feet in diameter) and was completed in 2007. The new camera will be the telescope’s third and it’ll be a significant upgrade from its predecessor, but more on that later.

This isn’t the same kind of telescope you might use to observe constellations or planets in the night sky. The South Pole Telescope’s purpose is to observe and measure radiation left over from the Big Bang.

The South Pole Telescope’s camera measures this radiation, which contains the earliest imprints of our universe and dates back nearly 14 billion years, making it the oldest light in the universe. Through observation, scientists are hoping to better determine how the universe evolved from the period immediately after the Big Bang to present day. Data may also suggest how the universe will continue to develop. But the CMB's light is very faint and dispersed, so it requires an extra-sensitive camera.

Left: A detector array fabricated by the Argonne National Laboratory for the SPT-3G camera. Each 3-mm diameter antenna is connected to six superconducting detectors that measure frequencies from the cosmic microwave background. (Reidar Hahn). Right: The base of the SPT-3G camera being tested at Fermilab. The camera is four times heavier than its predecessor and contains 10 times more superconducting detectors. (Bradford Benson)

The University of Chicago is working closely with Argonne National Laboratory and Fermilab, along with scientists from over 20 institutions, to construct and eventually install the new camera, SPT-3G, which is four times heavier than the camera it will replace. It also contains 10 times as many superconducting detectors, which are sensitive to the photons of light emitted from the CMB.

These extra-thin detectors are not commercially available, so Argonne is delicately fabricating them at their Center for Nanoscale Materials. It’s a process rife with challenges, as University of Chicago astrophysicist John Carlstrom explains. 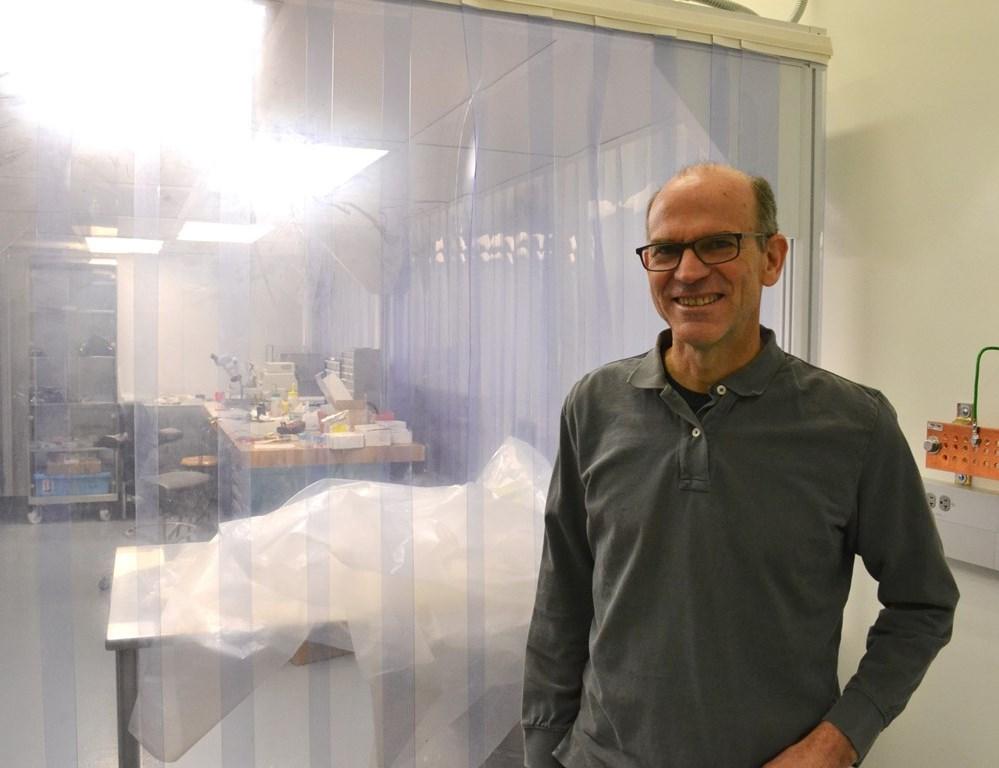 University of Chicago astrophysicist John Carlstrom at the school's laboratory where some of the experiments for the new camera are conducted. (Evan Garcia)

“The signals we’re looking at are so weak,” said Carlstrom, who leads the South Pole Telescope Project. “So we have to make sure the detectors are super quiet or noise generated by them will throw us off.”

Carlstrom says there are no cameras in the field today with more than one or two thousand detectors – theirs will contain 16,000. If everything goes as planned, the only noise that should interfere with the camera’s measurements will be from the sky.

That brings us to the advantages of setting the camera in the southernmost place on Earth: the South Pole.

From the Bottom of the Earth

Trying to measure tiny, millimeter and sub-millimeter wavelengths of light is further complicated by water vapor present in our hazy atmosphere. This water vapor absorbs radiation from the CMB that scientists are trying to detect.

It also gives off radiation, creating a “false signal” that alters the variations in brightness and light that scientists are looking for in the CMB.

The atmosphere of the South Pole has much less water vapor than elsewhere on Earth due to its high altitude: the telescope sits on a plateau of ice and snow nearly two miles high. The area’s frigid climate, which can dip below negative 100 degrees Fahrenheit, also limits water vapor. The result is a very clear, dry atmosphere that bolsters visibility into space.

Carlstrom also notes the South Pole’s position on the globe as a benefit. The sun is a prominent producer of microwaves, which could skew the telescope’s measurements of light from the CMB.

“Down there, the sun goes behind the Earth and is blocked for six months of the year,” Carlstrom said. “The Earth is spinning underneath you, but it’s not whizzing you around the equator.

“So we have a clear view of the sky, the heavens, and we don’t have to wait 24 hours for it to come up again.”

Much of the activity at the South Pole is limited to what passes as the region’s summer season: around November to January. Outside of those months, it’s too cold for planes to operate. Carlstrom says the University of Chicago hires two scientists to stay at the research station during the “off season” to monitor the project. He's made nearly 20 trips to Antarctica himself since 1995 and will be traveling there next austral summer to install the camera. 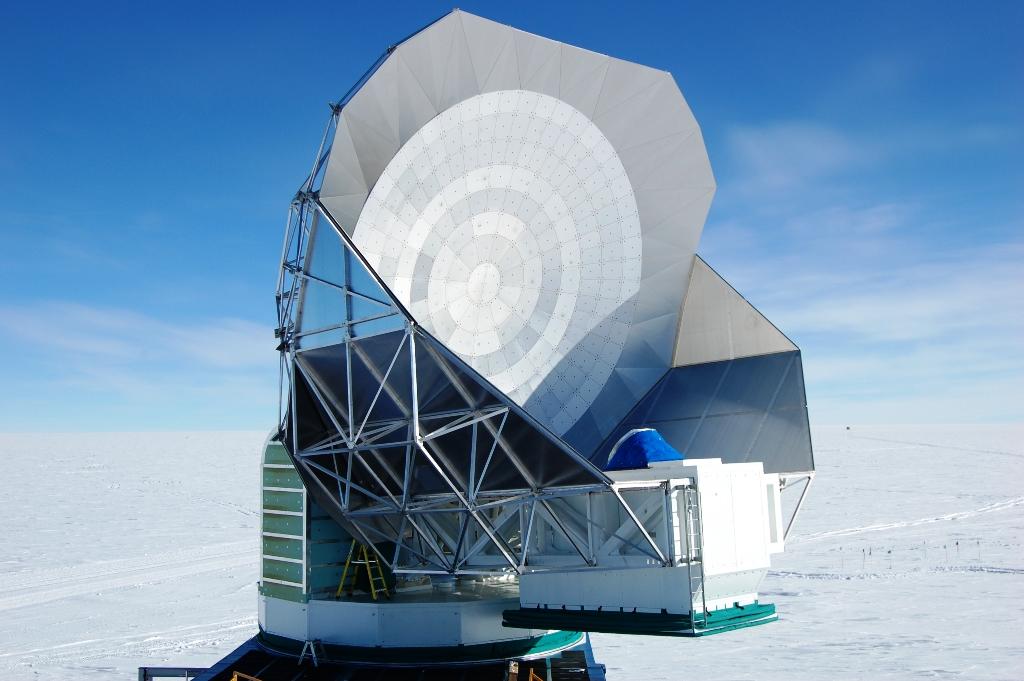 The South Pole Telescope is nearly 33 feet in diameter – about the length of three stories. (Bradford Benson)

“You get used to it in a funny way,” Carlstrom said. “Obviously, the first time you go, it’s just surreal. You step off the plane and the thing that hits you is the brightness of this vast, white plateau and then a few seconds later the cold hits you. Can you think of the coldest, crisp, clear day in Chicago? It’s much, much more than that.”

Clarence Chang is a physicist at the Argonne National Laboratory who's also working on the SPT-3G camera. Like Carlstrom, he's made several trips to the South Pole. While there are at most only a couple hundred people working there at any given time, he says the tight-knit community stands out. 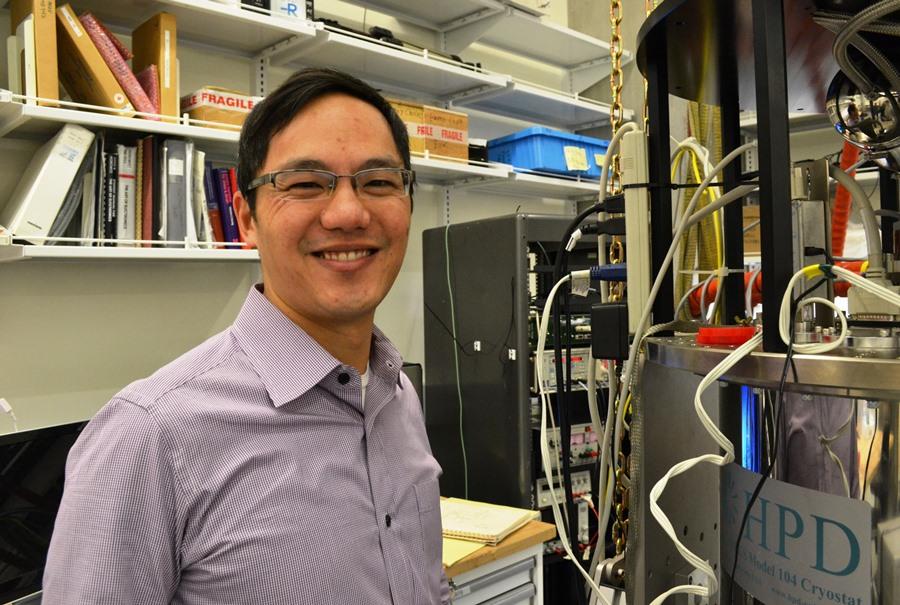 Argonne National Laboratory physicist Clarence Chang helped fabricate the new camera's tiny, delicate components. (Evan Garcia) “It’s this odd feeling,” said Chang. “You have to interact with everybody. Everybody helps each other and pulls together to make things work, especially when things happen that you didn’t plan for. And by everybody, I mean not just the scientists, but the cooks and pilots and everyone else.

“In a place like Chicago, you’re surrounded by people but you’re kind of disconnected in that you don’t know the people around you. If you need a hand, you don’t always know who to talk to. Everybody isn’t necessarily going to pull together to help you push your car out of the snow. Quite the contrary, they might park their chair there to occupy the parking space.”

Both Carlstrom and Chang said they experience a sense of culture shock upon returning home after spending time in such a distinctive environment.

By measuring slight frequencies and variations in the CMB, Carlstrom and his team are hoping to indirectly learn more about elusive “ghost particles” known as neutrinos. These mysterious subatomic units are even older relics of our ancient universe compared to the CMB's radiation. Neutrinos are believed to be a form of dark matter, a hypothetical type of matter that scientists have yet to directly observe.

Lots of them were formed less than a second after the Big Bang. The particles have no electric charge and rarely interact with each other. Neutrinos were originally thought to be massless, but Carlstrom says particle physics experiments have revealed they have some mass, although they’re not sure how much.

“There are so many of them,” Carlstrom said. “There are trillions of neutrinos traveling from the Big Bang and through your body every second.

“The minimum mass that they could have, makes their collective mass equal to all the stars in the universe. We can measure how the universe evolved by looking at these early relics.”

Because neutrinos rarely interact with ordinary matter, they were able to travel outside the primordial soup long before the CMB's light and formed the cosmic neutrino background when the universe was just two seconds old. The South Pole Telescope team is hoping to indirectly measure the mass of neutrinos via their imprint on the CMB.

Determining the mass of neutrinos, the oldest known subatomic particles, would help scientists illuminate a mysterious part of our universe's history. 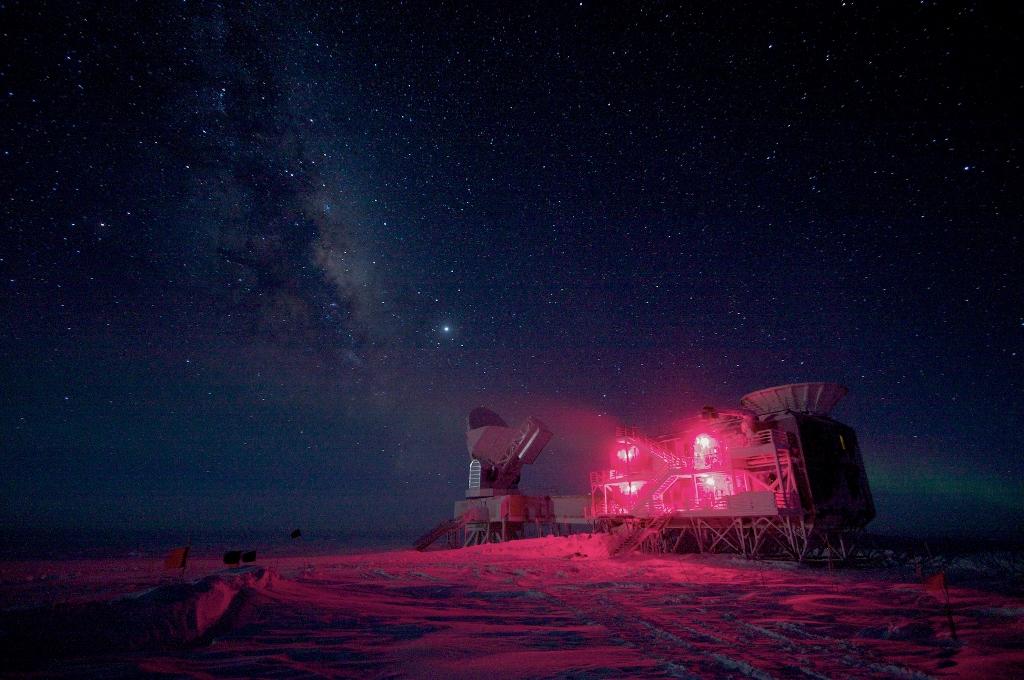 The cosmic microwave background was first observed in 1964 by scientists Arno Penzias and Robert Woodrow Wilson, who won the 1978 Nobel Prize in Physics for their discovery. (Keith Vanderlinde)

The magnitude of their research and work is not lost on Carlstrom or Chang. If all goes as planned, the upgraded camera will provide exciting new information about the origin of our universe. By measuring the frequencies of the CMB with 10 times more detectors than before, Carlstrom says they’ll attain results in four or five years that would have normally taken 30 to 40 years.

It will not be an easy task. A camera of this scale has never been built before and working in the South Pole’s harsh conditions further complicates research efforts.

“One of the things you learn is that everything that’s exposed to the cold and the weather will fail in a way you never thought of,” said Carlstrom. “When you fix it so it won’t fail that way, then you just find the next way it will fail.”

Given the future implications of their work, Carlstrom is willing to weather the challenges of this venture.

“It’s really exciting,” Carlstrom said. “It’s physics we don’t know anything about. The last time physics as a field had so many things that didn’t quite fit together, people got real smart and realized quantum mechanics was the basic description of the universe, which led to your iPhone, lasers, MRIs and all sorts of great stuff.

“We’re building instruments like this camera and we don’t know where it’s going to take us.” 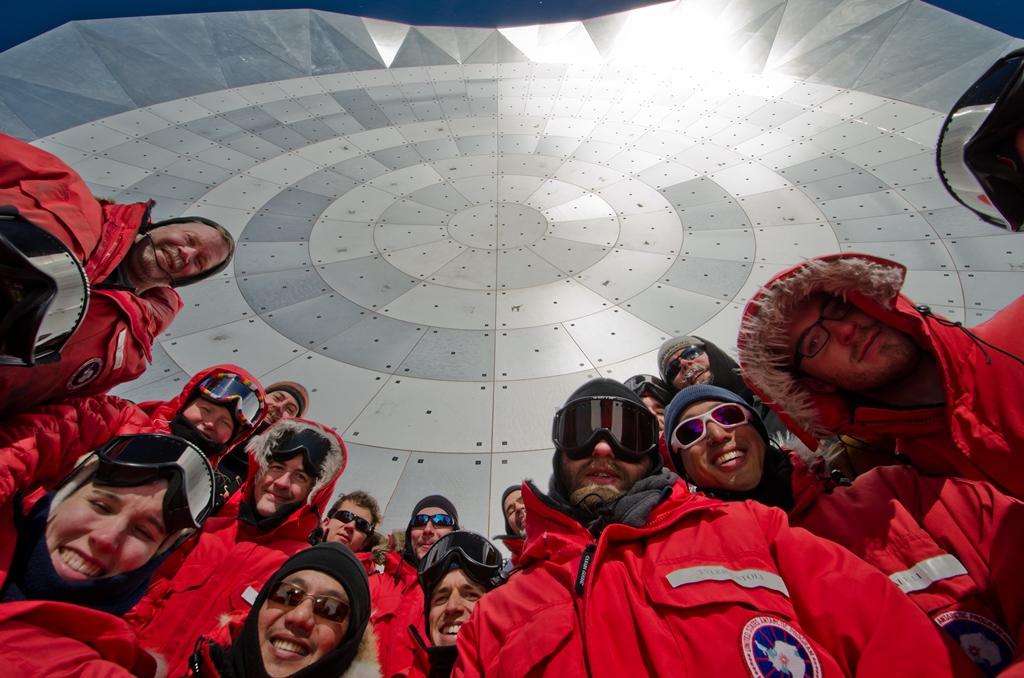 South Pole Telescope team members in front of the telescope. The project is one of many collaborations between the University of Chicago, Argonne National Laboratory and Fermilab National Accelerator Laboratory. (Nils Halverson)

Carlstrom says the camera is about two-thirds finished. The construction is nearly complete, but additional research and development are required. Working closely with the University of Chicago and Argonne, Fermilab is integrating the detectors and electronics into the new camera, which is scheduled to be installed on the telescope at the end of this year.

The third-generation camera project costs about $8.5 million and is funded primarily by the National Science Foundation, which funds the South Pole research station and all telescope work there. Argonne is receiving funding from the Office of High Energy Physics at the Department of Energy to build the camera’s detectors.

Chang believes it won't be long before the camera produces valuable, thought-provoking information about our early universe.

"If all goes as planned," said Chang, "we'll begin accumulating data as soon as the camera is installed. Even the data from the first year will be exciting and we would likely be publishing a little after that."

The team even has plans for a more advanced, fourth-generation camera, but that project is still in its early stages.

Suspect in Shootout With U of C Officer Wanted ‘Suicide by Cop’: Prosecutors
Watch and Listen Anywhere, Anytime
Like us Follow us