Over the weekend, Mayor Rahm Emanuel announced that O'Hare Airport would get a long-planned sixth east-west runway. This, after United and American Airlines agreed to help fund the $1.3 billion project that's part of the O'Hare Modernization Plan.

The layout and closure of some diagonal runways has caused a lot of controversy.

"The FAA, through it's standards and criteria encourages–especially very busy hub airports like O'Hare–to always have the aircraft lined up in parallel configurations," said Chicago Aviation Commissioner Ginger Evans during an interview with Eddie Arruza. "That gives them the safest configuration and the most efficient configuration." 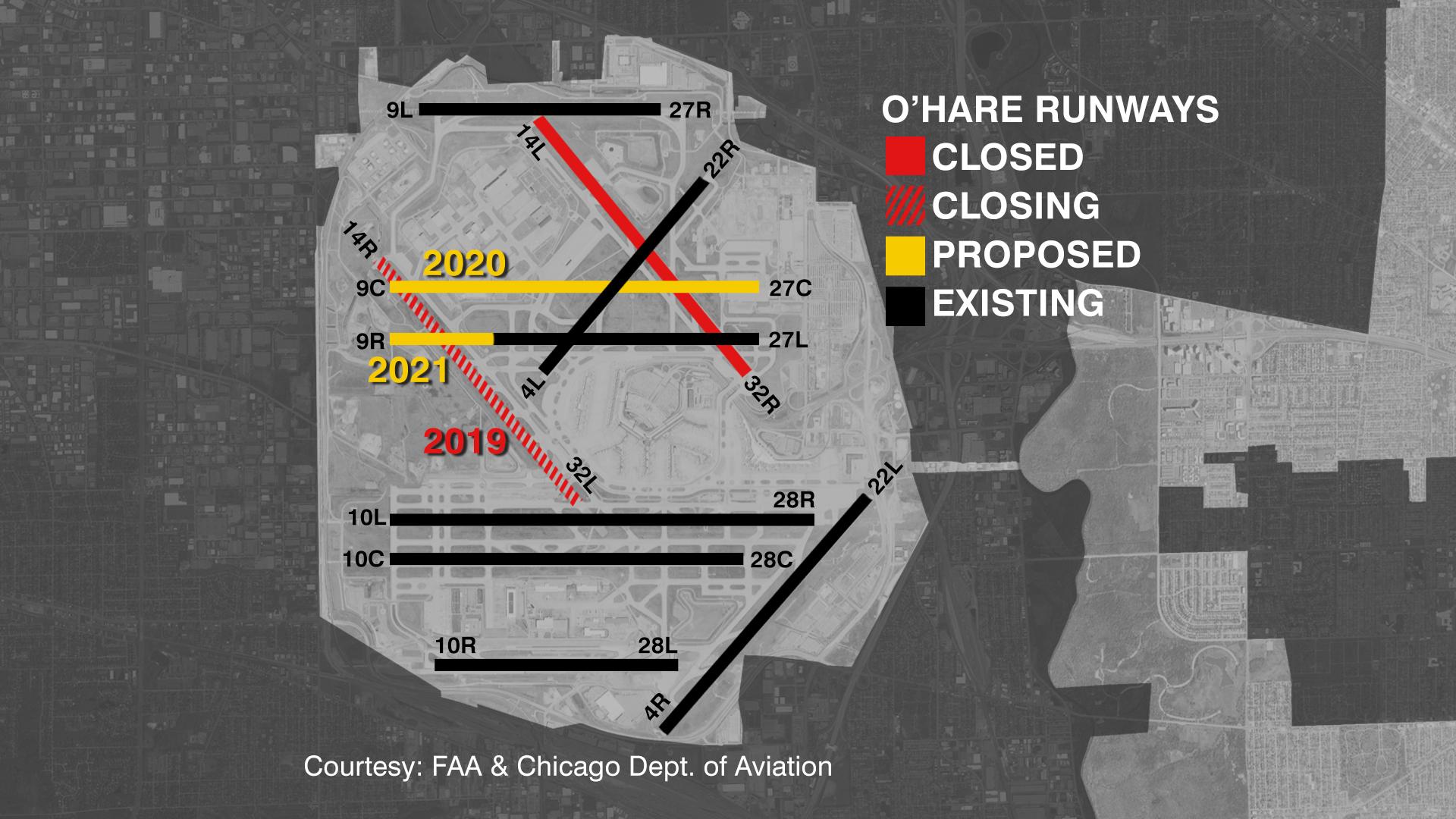 "Further, the runway that it replaces, the diagonal runway, has some very significant safety issues," she added. "It also blocks the western access highway, and it also blocks the addition of gates. This whole package is intended to get O'Hare ready to be able add gates."

New gates and terminal expansion can't be built until the diagonal runway and a taxiway are moved, Evans explained.

"We are working on gates," Evans said, but noted that the runway project had to come first "by virtue of its physical constraints."

The announcement came only days after Mayor Rahm Emanuel met with activists protesting increased airplane noise that's come with runway additions at O'Hare. They are now blasting the city for forging ahead with yet another one.

The main group leading the charge to get relief is called Fair Allocation in Runways.

“We were pleased to finally meet with the mayor after two and a half years of asking for a response to the real and negative lived impact that people have been suffering with for two and a half years,” said Colleen Mulcrone of FAIR after the Jan. 27 meeting. “Unfortunately, the result of this meeting was more of the same and it’s business as usual. We were advocates for those diagonal runways that we want to keep to provide noise relief to the most communities."

The expansion announcement also seemed to blindside some elected officials who have played key roles in getting funding for O'Hare and who represent those communities impacted by airport noise.

"The Congressional delegation was briefed in December," said Evans. "I personally briefed Congressman Quigley, so they have known for some time that this deal was eminent."

In terms of the noise issues, activists say those concerns are not being addressed, nor were they given any indication that the recent announcement would be made.

"We absolutely share their goals," Evan said. "There's no question–all of us, everyone involved. The goal is to reduce noise as soon as we can, and fortunately we have a very comprehensive plan to do just that. This package that we just announced has significant noise benefits."

"We've said in our plan, in our recommendations, that we were going to focus on the most serious impacted residents first. That's exactly what we're doing, it's the right thing to do. Moving that unacceptable noise exposure off of Schiller Park is what was said was going to happen, in all the environmental disclosures, and all the community meetings," Evans said.

A list of recommendations to help combat noise was issued last August. It included a nighttime rotation plan Evans calls "very significant" that they hope to implement this summer. But how much has already been done?

"Four of the 24 recommendations have been implemented, another four are very close to being implemented," Evans said. "Again, we prioritize the most significant impacts first."

Evans stressed that the Chicago Department of Aviation doesn't have the authority to "change how FAA uses the airfield."

Arruza asked, "But you do have the authority, do you not, to keep one of these diagonal runways in use? That is one of the things that the noise activists have been asking, that you are not using this 14R32L runway to try to send planes over industrial and park district areas."

Evans replied, "The FAA issued a rule on the recommendation of the National Transportation Safety Board in 2014, that took the use of that runway from 500 departures a day to zero in a single month because of very serious safety concerns. I don't have the authority to change that rule, nor does really the FAA.

"Even the FAIR leadership–I have sensed a change in the last couple of weeks–now recognizes that because of the CRO, that runway isn't going to be used, hasn't been used, and therefore, how can you solve a noise problem with a runway that FAA isn't going to use? Fortunately, the new runway can hit that same departure corridor to the northeast." 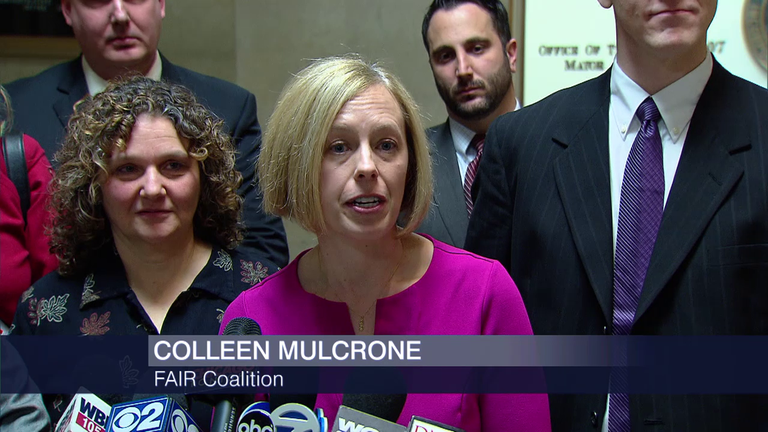 Jan. 25: City and suburban residents have demanded that the Chicago Department of Aviation take steps to address the problem of O'Hare noise and today Mayor Rahm Emanuel met with members of one community group. 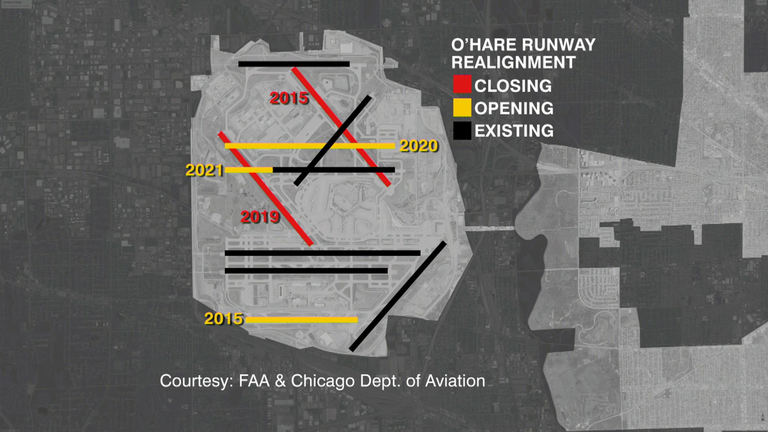 October 2015: The fifth of six planned east-west runways at O'Hare International Airport is officially open today. Will this development help to quiet residents' noise complaints or make the problem worse? 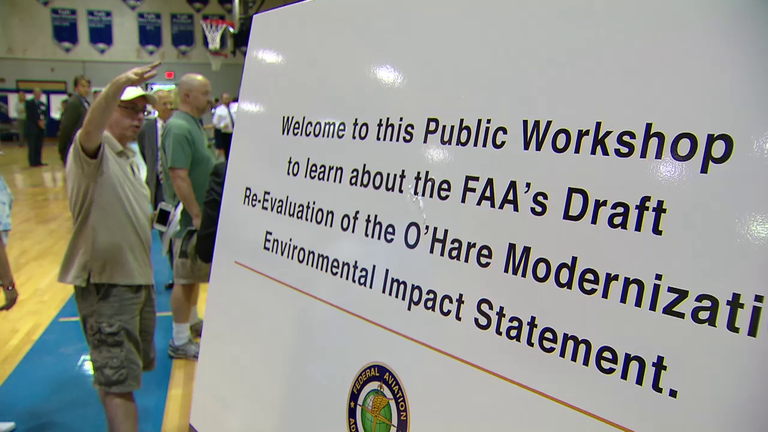 August 2015: Chicago residents who say that the reconfiguration of O’Hare’s runways will lead to higher noise levels in their neighborhoods sound off in front of Federal Aviation Administration officials. 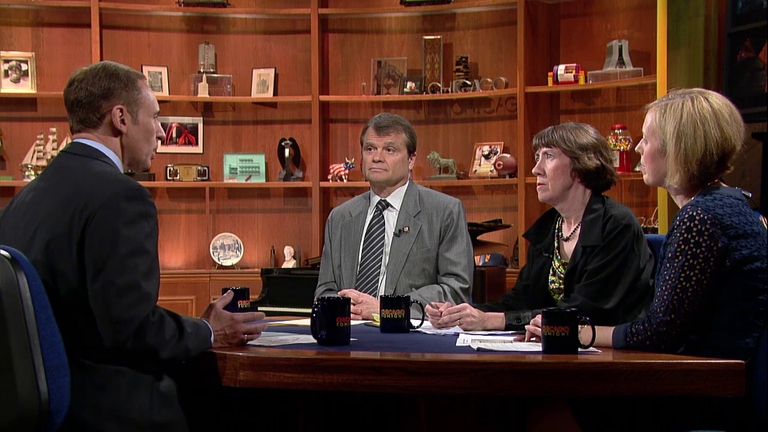 July 2015: Complaints about jet noise at O’Hare International Airport topped more than 400,000 in May. On Thursday, Gov. Bruce Rauner signed legislation that will increase the number of runways allowed at O’Hare in an effort to mitigate jet noise affecting some Chicago neighborhoods and suburbs.