The Eisenhower Expressway runs right underneath the Old Main Post Office, causing one viewer to wonder which came first. Geoffrey Baer delves into the history of these interlinked landmarks in this week’s edition of Ask Geoffrey.

He also answers questions about what happened to Midway’s Cloud Room Restaurant and where the pipe organ from Sally’s Stage went. 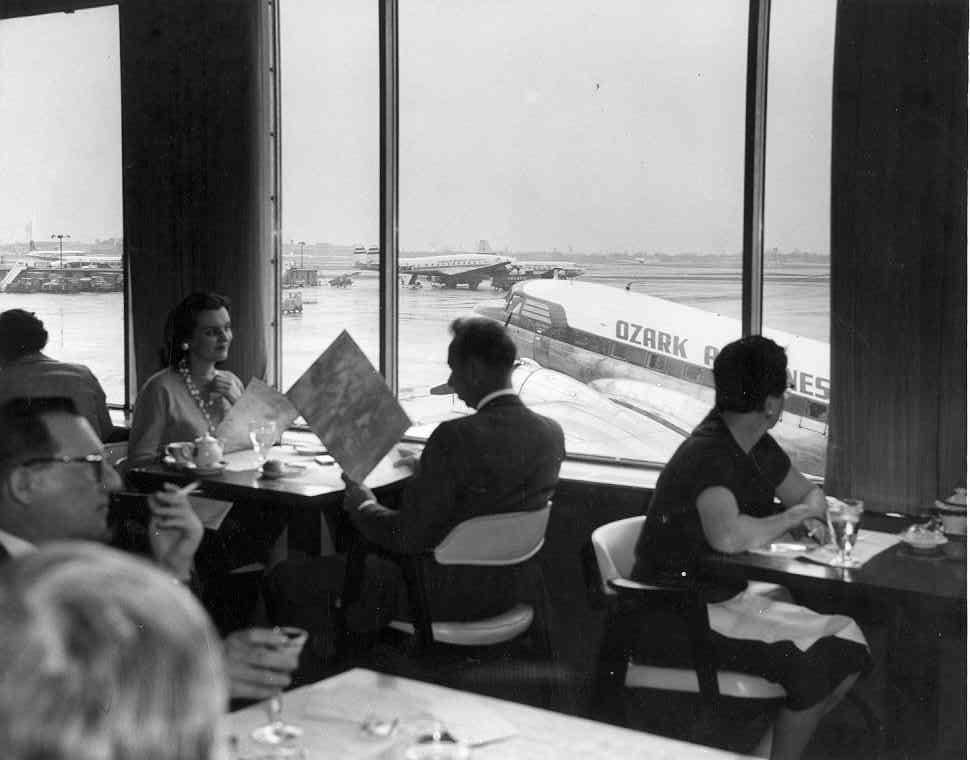 (Chris Lynch and the Rotunno family)

The Cloud Room Restaurant epitomized the glamour of air travel’s golden age. Imagine a time when a trip to the airport meant savoring a cocktail and a delicious meal alongside celebrities while just outside the window, propellers spun and engines roared to life on planes bound for exotic locations. Sure beats standing in your socks in a security line and gulping down a burger and fries!

The glitzy white-tablecloth restaurant on the second floor of the Midway terminal was open from 1947 to 1964 and was owned and operated by Marshall Field’s, which also ran a coffee shop in the airport. The 6,000-square-foot dining area had floor-to-ceiling windows, giving patrons a view of the airfield. The impeccable service, unbeatable view and fine food made the restaurant a destination for Chicagoans.

Adding to the attraction was the chance of spotting a celebrity. At the time, Midway was the major airport in Chicago, so celebrities like Marilyn Monroe, Bob Hope and Jimmy Stewart, or even statesmen like President Harry Truman would stop in for a bite on their way into or out of town. According to an anecdote in “When Hollywood Landed at Chicago’s Midway Airport,” Truman downed a shot of whiskey before enjoying his breakfast at the Cloud Room. 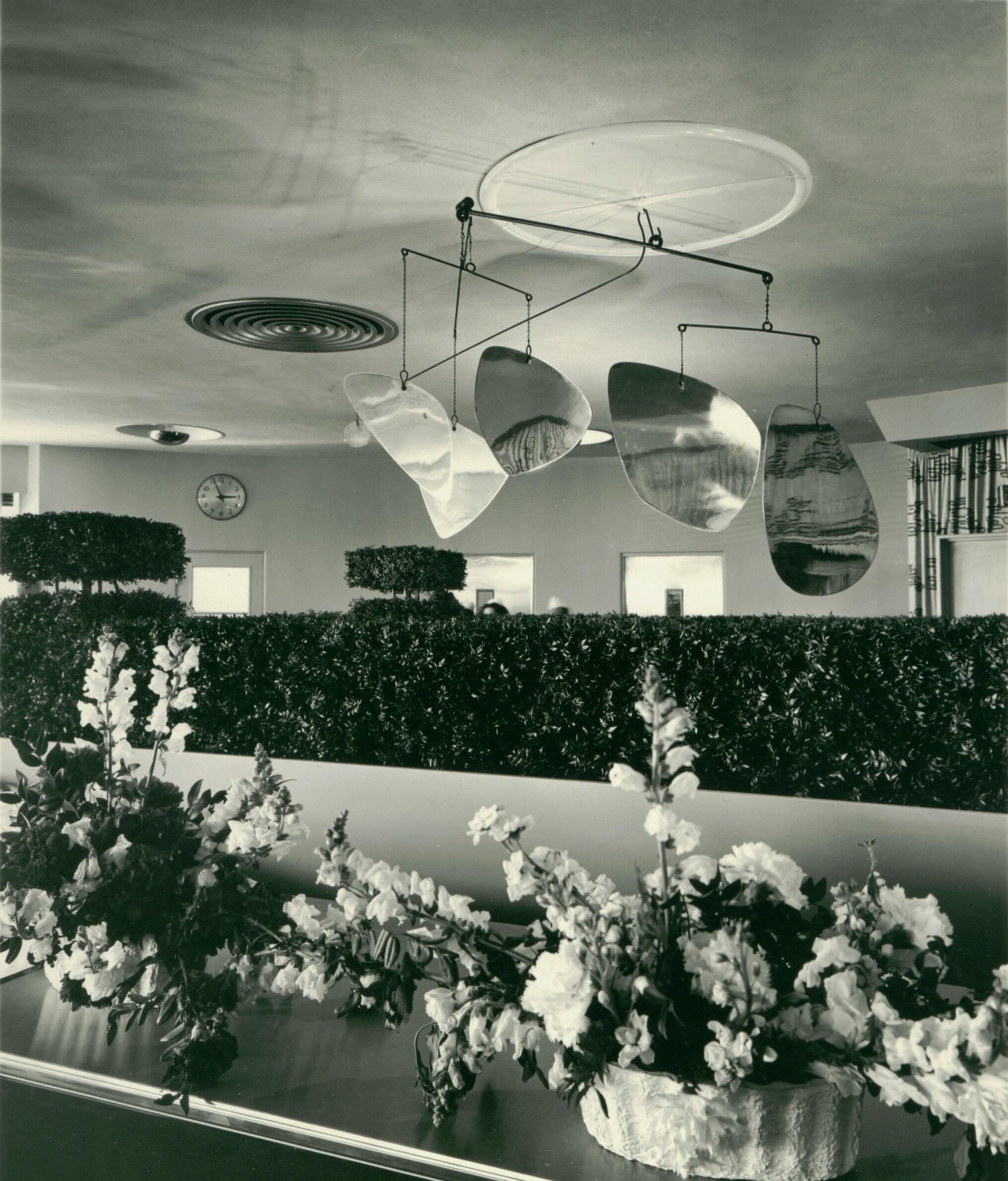 (Chris Lynch and the Rotunno family) The opulent atmosphere was further enhanced by a striking brass Alexander Calder mobile just inside the front entrance, called “Brass in the Sky.” Marshall Field’s commissioned the piece specifically for the Cloud Room. According to historian and preservationist Melvyn Skvarla, it was Calder’s only brass mobile.

By 1964, Midway had lost its place as the air travel center of Chicago, and the Cloud Room was shuttered.

As for “Brass in the Sky”, it spent some time in storage and later was installed at the Northbrook Court location of Marshall Field’s. When Target Corporation took over, it was given to the Museum of Contemporary Art, who sold it at auction in 2005 for over $2 million. Today, it’s in a private collection.

Chicago remains a Calder kind of town, though – most Chicagoans are very familiar with his red “stabile” titled “Flamingo” in the Kluczynski Federal Building plaza. Another of his works, a mobile titled “Red Petals”, hangs in the Arts Club of Chicago.

Our thanks to the family of Mike Rotunno and author Christopher Lynch for the photos they shared with us for this story. 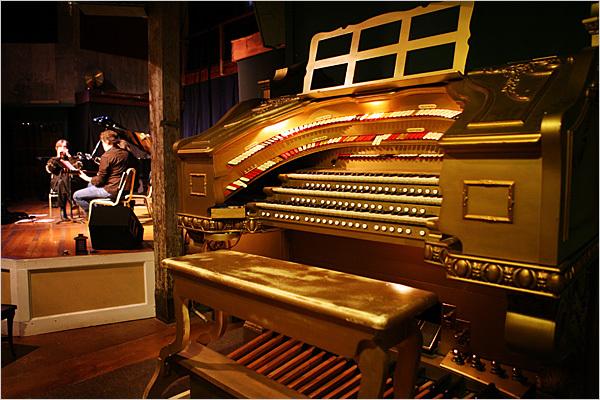 In the 1970s I was a waitress in a restaurant, Sally's Stage, at Devon and Western. It had a tremendously large, beautifully rich sounding pipe organ. Where could it be now? – Karen McCluskey, Third Lake

Sally’s Stage was a Rogers Park restaurant where your deep dish pizza came with a side of vaudeville-style entertainment, including the pipe organ our viewer remembers. It was a 1926 Barton 3 manual 10 rank pipe organ that the owners of Sally’s, Joe and Mike Bortz, bought to one-up their other restaurant, a popular ice cream parlor named Doctor Jazz with an antique, working nickelodeon.

When they opened Sally’s Stage in 1973, the Bortz brothers decided the only way to outdo themselves was with an old theater pipe organ. They eventually found one in a Fond du Lac, Wisconsin theater. It was later replaced with an even bigger organ, a Barton 3 manual 14 rank organ. That one came from the Paramount Theatre in Hamilton, Ohio. It was mounted on a platform that would dramatically rise up out of the stage, and the organist would lead diners in a sing-along or play a game of “Name That Tune.”

Today, that organ plays on at the Acorn Theater in Three Oaks, Michigan, where it’s used for concerts and silent film accompaniment.

Sally’s served up other entertainment too – magicians, mentalists, comedians, dancers, ventriloquists and singers. Amateur night was another big draw – anyone was invited to get up on stage and share their talents, however questionable. Patrons could send singing telegrams, or “Sally-O-Grams,” to other diners. It even had roller-skating hosts and a skating track around the dining area!

The concept was successful enough that the Bortz brothers opened a second Sally’s Stage in Lombard. But when the economy ran into trouble in the early ‘80s, so did Sally’s Stage. Joe Bortz said that the blue-collar families that were the restaurant’s mainstays just weren’t going out anymore, and the Bortzes sold the business in 1983. The new owners tried to revive Sally’s Stage, but that fizzled too, and the curtain closed for good on Sally’s Stage in 1986.

Our thanks to Joe Bortz for the photos they shared with us for this story.

What was first, the Eisenhower or the old post office? If the post office was first what did they do, cut a hole in it? – Gregory Gorski, Edgewater

As most people know, the building straddles the Eisenhower Expressway at Congress and Canal.

It was built in stages from 1921 to 1932, more than 20 years before the highway. But the post office planners knew the highway would one day be built because it was the main east-west axis of Daniel Burnham’s great Plan of Chicago from 1909, so the building was designed with a hole in it to accommodate the future expressway. The Congress and Canal site was especially strategic because it also straddles the railroad tracks, allowing mail sacks to be sent down chutes onto the trains during the days of railroad post.

Graham, Anderson, Probst & White designed the monster building. With 14 floors and more than 2.5 million square feet of floor space, it was the largest post office facility in the world according to Modern Mechanics magazine. 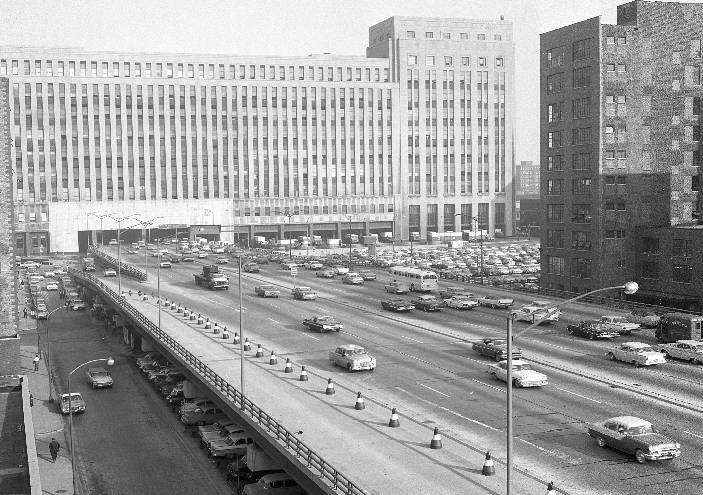 The hole was used for truck entrances until the Congress Expressway was built in 1954. The expressway was renamed to honor President Dwight Eisenhower a decade later.

Ultimately, the massive edifice became a victim of its own size. Automated postal sorting technology made the gigantic building obsolete. The building has been vacant since the mid-‘90s, when it was replaced by a new, modern facility on Harrison Street. A handful of schemes were cooked up for the site’s reuse: a casino, a parking garage and even an amusement park.

In 2009, the mysterious British real estate developer Bill Davies bought the old main post office for $24 million. Since then he’s put forth a few new proposals, including moving Walgreens headquarters to the location and a sweeping $3.5 billion riverfront development that included what would have been the tallest tower in the western hemisphere.

Obviously those never came to pass, but his most recent plan was just released in January proposing 1,500 “micro-apartments” and a new – more modest – tower addition.

In February, Mayor Rahm Emanuel moved to use the city’s power of eminent domain to take over the aging property from Davies and accept new proposals for its development. The request for proposals is expected in spring 2016 with a winner announced in the summer. We’ll update the story as it unfolds.