Local history expert Geoffrey Baer visits the towering walls on the south lakeshore and a swampy nature area in the middle of an industrial neighborhood at the city’s edge in this week’s edition of Ask Geoffrey.

On Nov. 30, WTTW will debut a new documentary about Chicago’s South Side neighborhoods, highlighting the events that shaped them and the people who live there.

While driving south on the new portion of Route 41 at about 64th St., there are two walls that look to be about 14 feet wide and two football fields long. What were they used for? 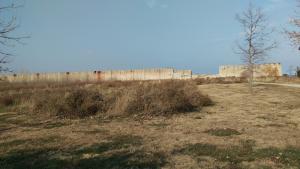 These colossal concrete walls, known as ore walls, are a remnant of the vast U.S Steel South Works plant, which closed in 1992. The walls run parallel to the North Slip, where ships would dock and unload their cargo of iron ore which was piled high against the walls. They’re the most visible remnant of the nearly 600-acre steel plant, which once employed 20,000 people and produced much of the steel that built Chicago’s skyline.

A steel mill was first built at the mouth of the Calumet River in the 1880s.  The waterways and railroads made it easy to transport materials. U.S. Steel took over the plant in 1901. The well-paying jobs in the mill attracted Italian, Polish, Mexican and African-American workers—many of whom settled in the surrounding South Chicago neighborhood. But by the 1970s, demand for steel produced stateside dropped, and South Works began downsizing. The plant finally closed for good in 1992, and the site was cleared except for the gargantuan ore walls, which would have cost a fortune to tear down.

Since then, the walls and surrounding area have been the focus of big redevelopment plans, including a failed attempt to draw the Solo Cup factory to part of the site. Today, the current redevelopment headed up by a company called McCaffrey Interests is called, appropriately enough, Lakeside. Their plan is for nothing less than one of the largest planned communities in the country, with a mix of 15,000 residential units, retail, restaurants, parks, commercial space and a marina. Two steps along the way are already complete. The first was Steelworkers Park, located on the lakeshore between the North Slip and the Calumet River. The 16-acre park opened in 2013, offering public lakefront access from this site for the first time in well over a century. The same year, an extension of Lake Shore Drive was completed. It now runs from 79th Street through the site and down to 92nd Street, where it becomes Avenue O and then U.S. 41.

Can you shed any light on the history of the Southeast Side neighborhood of Hegewisch? I was told it was founded by an industrialist who wanted to develop a community like Pullman. My mother used to say you live in "Hegewisch," not Chicago. 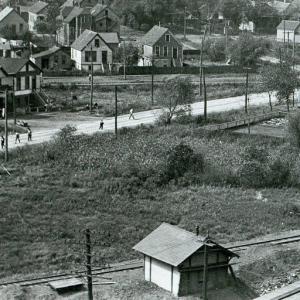 George Pullman gets all the press, but another Chicago rail car manufacturer named Adolph Hegewisch set up a company town, and it was right next door to Pullman. In 1883 when he was president of the U.S. Rolling Stock company, Hegewisch bought 100 acres in what was then the swampy wetlands about 16 miles southeast of the Loop. Hegewisch built new rail yards for his company there, and investors bought 1,500 acres surrounding the yards to build a model town not unlike Pullman for the workers.

Like his inspiration George Pullman, Adolph Hegewisch had grand plans. He intended to build two canals connecting Wolf Lake to Lake Michigan to bring in more industry. However, Hegewisch was never able to raise enough money to make his dream a reality and much of the area remained undeveloped.

In 1889, Hegewisch (the town) was annexed by the City of Chicago as part of Hyde Park and became its southernmost neighborhood. What little town there was became increasingly cut off from jobs and prosperity to the north. Hegewisch (the man) died a few years later and his company name disappeared when another manufacturer bought it.

Eventually the neighborhood benefitted from industrial development in the region. These days, Hegewisch is best known as the place where Ford Tauruses come from. Ford Motor Company built its second-largest automobile assembly plant along the Calumet River in the 1920s. Hegewisch is also the site of Chicago’s only operating sawmill, Calumet Harbor Lumber Company, a fourth generation local business. And, it is home to the city’s only mobile home park, Harbour Point Estates.

Perhaps most surprisingly, in the middle of this heavily industrial area is Hegewisch Marsh, a wetland preserve that is a refuge for many endangered species of birds.