President Barack Obama came to Chicago this afternoon and there are reports that he'll be at the Bulls Game at the United Center tonight. But he attended to some far more serious matters as he addressed the International Association of Chiefs of Police (IACP) conference at McCormick Place. He praised the work of law enforcement professionals but acknowledged that his hometown is in the grips of  increased violence. He also spoke about his personal experience with racial profiling.

“It is easier in some communities to find a gun than it is to find some fresh vegetables.”

The president began his remarks by thanking some of the estimated 14,000 law enforcement professionals gathered at McCormick Place on behalf of the American people, praising them for the often dangerous work and countless acts of kindness they do that do not make the news. But then he got into some tougher issues affecting the country and he even joked that he can do so without worrying about re-election.

Topping the list of issues of course are the tensions in a number of cities around the country between police and mainly minority communities that have resulted in riots and protests.

"For generations, we've had African-American and Latino communities who've pointed to racial disparities in the application of criminal justice–from arrest rates to sentencing to incarceration rates–and all too often, those concerns, no matter how well documented, have been brushed aside," Obama said. "At the same time, too often law enforcement gets scapegoated for the broader failures of our society and our criminal justice system.

"But we can't expect you to contain and control problems that the rest of us aren't willing to face or do anything about," he added. "Problems ranging from substandard education, to a shortage of jobs and opportunity, an absence of drug-treatment programs, and laws that result in it being easier and easier in too many neighborhoods for a young person to purchase a gun than a book."

The president also spoke on a very personal level about his own encounters with what he felt was police profiling.

"There were times when I was younger–and maybe even as I got a little older, but before I had a motorcade–where I got pulled over and ... most of the time I got a ticket, I deserved it. I knew why I was pulled over," Obama said. "But there were times where I didn't. And there's a report that came out just this week, reminding us there are a lot of African-Americans, not just me, who have that same kind of story of being pulled over or frisked, or something. And the data shows that this is not an aberration. Then we've got to have departments to honestly and fairly address it, and not just simply close ranks or stand down. So none of this is easy, but it can be done."

He acknowledged that in many cases police responding to a call may confront a perpetrator that has better weapons than the police. And he renewed his push for stronger national background checks and banning the sale of semi-automatic weapons to civilians.

"There are those who criticize any gun safety reforms by pointing to my hometown as an example," he said. "They say, 'Well look: Chicago had a spike in homicides this year, they've got gun safety laws, so this must be proof that tougher gun safety laws don't help; maybe make things worse.' The problem with that argument, as the Chicago Police Department will tell you, is that 60 percent of guns recovered in crimes come from out of state. You've just got to hop across the border. ... It is easier in some communities to find a gun than it is to find some fresh vegetables."

One of the gun rights groups in Illinois is called Guns Safe Life (GSL). They've been in the news recently as the group that may try to game Chicago's newly announced gun buyback program by turning in defective weapons and using the money the city is doling out to train young people in how to properly fire guns.

“A lot of the guns used in crime aren't purchased at stores. They're stolen prior to the crime.”

"I'm pretty sure based on a lot of the information I know of, that a lot of the guns used in crime aren't purchased at stores. They're stolen prior to the crime that it's used to commit with. A lot of times, they don't even have serial numbers on them at that point in time, to really trace them back to where they came from. So really, all the more gun control is going to do is [allow] for more classism, racism and sexism in our country because it's law-abiding citizens who it's effecting. It's not effecting criminals. Criminals will always do crime, whether there's a law that says that they shouldn't. But the idea of the Second Amendment is to protect us from our government, or another government who'd try to come in and take control over our government."

Below, watch Obama's full remarks at the 122nd annual IACP conference in Chicago. 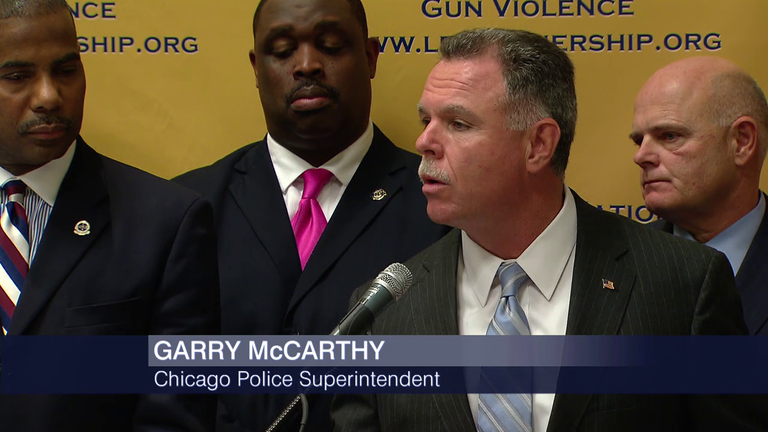 On Monday, Chicago police Superintendent Garry McCarthy and other national law enforcement personnel sent a message to Congress about what they want done about gun violence.