Revisit a favorite episode with our resident history expert

Geoffrey Baer answers viewer questions about a unique painting that adorns an Old Town condo building, a prolific mural painter of the 1920s and '30s, and the origins of a giant map of Chicago that's visible from the river in this encore edition of Ask Geoffrey, which originally aired on March 25. 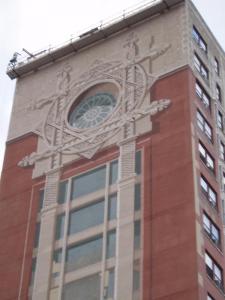 The LaSalle Tower Condominiums building has a unique painting on its southern face. Can you shed some light on why it is decorated in such a fashion? -- David Castanedo, Near North Side

The murals on three sides of the 21-story LaSalle Towers at LaSalle and Division are by the renowned trompe-l’oeil muralist Richard Haas and collectively titled Homage to the Chicago School of Architecture. The murals had deteriorated by the ‘90s, but they were restored in 2005 by Thomas Melvin, who was a student of Haas at Bennington College and worked with Haas on the original installation at the LaSalle Towers. (Melvin is also about to start work on restoring another Haas mural in Cincinnati, titled Homage to Cincinnatus, and he too has murals all around Chicago—more on that in the next question.)

LaSalle Towers was originally a hotel. When it was built in 1929, it was assumed that other tall buildings would soon surround the new tower. But the Depression stopped that from happening, leaving the walls on the north, east, and south sides perfect canvases for a trompe l’oeil artist. When the tower was converted into condos in 1981, the developer wanted to ornament the building with, in his words, “something that would make a statement,” rejecting “rainbows and sunsets and waterfalls” for something more dignified.

Haas painted the north side to look like a bank of windows reflecting a building that was never built (and wouldn’t have been anywhere near the LaSalle Towers if it had been built). It was architect Adolph Loos’ entry for the Tribune Tower design competition of 1922. It was a skyscraper designed to look like a Doric column. The east side was painted to appear full of the windows characteristic of a turn of the 20th century style of skyscraper design known as the Chicago School.

The south side is perhaps most fitting of the composition’s name. At the bottom, stairs lead to a reproduction of architect Louis Sullivan’s Golden Door from the 1893 World’s Columbian Exposition Transportation Building in Chicago. Haas also included portraits painted to look like bas-reliefs of great Chicago School architects Sullivan, Daniel Burnham, and John Wellborn Root, plus Sullivan’s one-time apprentice Frank Lloyd Wright. At the top of the south side is a reproduction of Sullivan’s massive circular window and ornament from the Merchants National Bank in Grinnell, Iowa.

If Haas’s work looks familiar, you might recall his mural of Daniel Burnham’s Plan of Chicago, which used to grace a warehouse building facing the Eisenhower Expressway. He also painted a number of murals in Homewood’s business district. In fact, he has works all over the country, including this very prominent and well-known one in St. Louis on the former Edison Bros. warehouse, now a Sheraton Hotel. Haas is still painting today and is working on a new commission in Philadelphia.

The Russian muralist Nicolai Remisoff did a number of mural projects in the Chicago area in the 1930s. Do any of them still exist? -- Robert Kirsch, Wilmette

Our research turned up numerous references to several Nicolai Remisoff murals around the Chicago area. During the 1920s and ‘30s, Remisoff’s work, including murals, was literally all over the city. Today, only two of his mural works are confirmed to still exist, and only one is viewable by the general public.

Remisoff also painted murals for two of the city’s most exclusive private clubs. In fact, one of those clubs is so exclusive that they’ve asked us not to mention its name, but confirmed they do have a set of Remisoff murals in their building. The other is The Chicago Club, for whom Remisoff painted three mural panels in 1929. According to The Chicago Club, the murals were lost to renovations long ago.

Two other murals are frequently mentioned in Remisoff biographies – he also painted a mural at the Graceland Cemetery chapel showing the figure of Christ surrounded by a mourning crowd of contemporary Chicago personalities.  But many found the work "too gloomy," particularly given the location, and the mural was destroyed in 2009 when the chapel was renovated. Another Remisoff mural at the former Passavant Hospital was lost when the hospital was demolished in the ‘90s.

The Russian-born Remisoff moved to Chicago in 1925, a few years after fleeing his native country when the ruling Bolsheviks attempted to jail him for publishing a satirical political magazine. In Chicago, Remisoff taught stage design at the School of the Art Institute for a short time before exploding onto the local arts scene. As a 1932 magazine profile of the artist said, “If you live in Chicago, you cannot escape contact with the art of Remisoff.” He designed sets and costumes for ballet and opera companies, backdrops for the Century of Progress World’s Fair, illustrated catalog covers for Marshall Field’s, worked as an architectural consultant, and of course, painted murals. 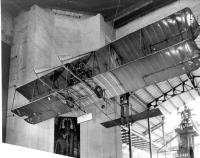 Remisoff even created giant, fantastical figures to decorate State Street’s lampposts for the Thanksgiving Parade in 1931. We also turned up records of four panels he painted to display in the rotunda of the Museum of Science and Industry; however, the only photo of those works is the top part visible in this photo of a model of the Wright brothers’ plane.

In 1935, Remisoff left Chicago for the West Coast, where he continued his work as a stage and costume designer and ultimately made it to Hollywood, where he worked on Gunsmoke and other TV shows and movies as art director or production designer. The 1960 Rat Pack classic Ocean’s 11 was his final work.

I’d like to know more about the art work on the side of the 300 S. Wacker building that faces the river? It looks like a map of the Chicago River with a red Bench where the building is at. -- Jon Kauffman

It is indeed a giant map of Chicago, which was unveiled last October.

This story is a reminder of what we used to think of the river when this building was built in 1971. It fronts on Wacker Drive, and back then, the side facing the river was considered very much like the back of a building facing a dirty, utilitarian alley. So instead of giving the river side a nice glass façade like the one on the front, the architects put up a big blank concrete wall supporting the elevators and mechanicals.

Today, however, the river is filled with tour boats and people strolling on the elevated Riverwalk just half a block to the north across the river. Last year, the building was purchased by Beacon Capital and they realized this concrete wall was a highly visible eyesore to passersby on the river. So they gave the plain Jane façade a Cinderella makeover with this gigantic mural. 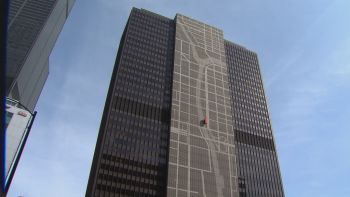 The mural is a map of the river and surrounding streets from Cermak to Chicago, and from LaSalle to Jefferson. The 300 S. Wacker building itself is represented by a red three-dimensional block that is backlit at night.

The mural was conceived by the New York firm ESI Design and painted by a Chicago company, South Water Signs. It took three and a half months to complete.

The new owners even continued the theme inside and commissioned the same designers to create engraved maps of downtown locations for the building’s elevator lobby. Large sheets of water jet-engraved stainless steel replaced marble panels, and a colored LED lighting system backlights the maps.