What happened to The Pickle Barrel Restaurant in Old Town?

In this edition of Ask Geoffrey, our local history expert Geoffrey Baer gets schooled at Midway Airport, snags a free pickle at a long-lost Old Town favorite, and soars with 19 terracotta eagles in Lakeview. 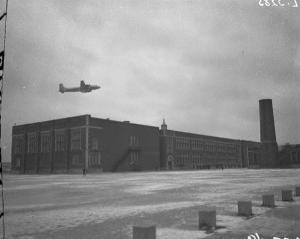 What can you tell us about the old Nathan Hale Elementary School that stood near the corner of Central Avenue and 63rd Street?
–Dennis Bayzer, Evanston

Students at Nathan Hale Elementary School had a good excuse for not hearing their teachers – the drone of propeller airplane engines! From 1925 to 1951 the school sat just a few feet from the end of a runway at the southwest corner of what was known as Municipal Airport until 1949, when the name was changed to Midway in honor of the WWII battle. For most of those years Municipal/Midway was touted as the world’s busiest airport. When Hale Elementary was built in 1925, Municipal was already a busy airstrip used for air mail runs. That same year, it was officially declared the city’s commercial airport. 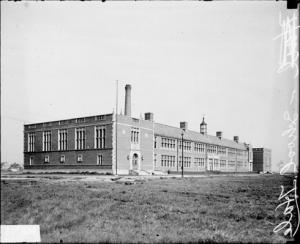 One former Hale student said that when the planes took off and landed, the entire building would vibrate. In a Chicago Tribune article, another student said that when the planes taxied past the school students would “scream and holler because the teacher wouldn’t know the difference.” The principal complained that teaching was interrupted by the noise from planes warming up before takeoff. The school even shortened its smokestack twice to reduce the chance of getting clipped by low-flying planes.

According to another article in the Tribune, a runway accident and other “close calls” finally prompted public school officials to discuss moving the school, but the move was delayed another two years after the airport closed those runways during school hours. Finally, in 1951 the school was shuttered when a new school, also named Nathan Hale, opened about 12 blocks west of the airport.

When I lived in Chicago in the early ‘60s there was a grisly St. Valentine’s Day tableau in the Wax Museum at The Pickle Barrel Restaurant in Old Town. As an 8-year-old it was pretty scary and grisly–especially before being seated for a roast beef sandwich (well done, please). How long was it there and whatever became of The Pickle Barrel? 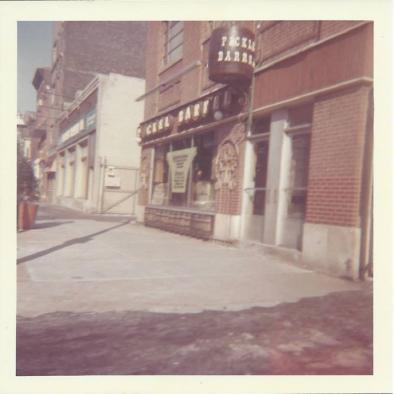 In Old Town there absolutely was a gruesome wax recreation of the St. Valentine’s Day Massacre, but it wasn’t at the Pickle Barrel.  It was a few doors away at the Old Town Royal London Wax Museum at 1419 N. Wells. Both institutions were part of the colorful assortment of businesses that made up Old Town in its hippie heyday.

The Royal London Wax Museum included wax figures of famous Chicagoans like Ernie Banks and Hugh Hefner – and infamous ones like Al Capone. Other wax occupants included Dracula, Frankenstein, Cinderella and Alice in Wonderland. The wax museum also had a room full of horrific scenes, like Bonnie and Clyde’s death and the St. Valentine’s Day Massacre tableau our viewer remembers: Definitely not something you want to see before dinner time at the Pickle Barrel at 1423 N. Wells!

The Pickle Barrel was the brainchild of Leo Osher, who helmed several Jewish-style restaurants and delis before opening the Pickle Barrel in 1950. The quirky outpost was right at home on the freaky streets of Old Town. The walls were decorated with oddities and antiques. Guests were greeted with a barrel of pickles for snacking and popcorn on the tables.

According to Osher’s obituary in the Tribune, in an average week the restaurant would go through 10 barrels of pickles and 400 pounds of popcorn. The menu featured deli sandwiches, and decidedly non-Jewish deli fare like ribs, fried shrimp and sloppy Joes. Balloon artists entertained the kids and pitchers of beer entertained the adults.

Osher opened four more Pickle Barrel locations, including one on Oak Street and one at Howard and Western. Osher sold the Pickle Barrel chain in the late 1970s and he and opened his last restaurant, Barnum and Bagel, in Skokie with his son Michael.

In 1967, the Old Town location even made a brief cameo in the video below, which was made for the pop group The Association. The video below was taped at Ravinia and features some great scenes of Chicago in the 1960s set to the music of their hit “Windy.”

On the southeast corner of West Sheridan Road and Broadway stands a building decorated with long rows of eagles all along its second story. Who was the architect of this building and is there any discernible reason why he chose this very distinctive mode of ornament?
–Joel Margolis, Lincoln Park 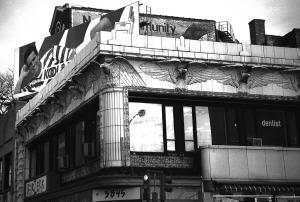 Photo credit: Jon Cutrell The building in the 3800 block of Broadway is the Isaac G. Ettleson Building but most people in the Lakeview neighborhood know it as the “eagles building,” and it’s easy to see why. Nineteen white terracotta eagles spread their wings under the cornice and along the perimeter of the façade.

It was built in 1911 and its first occupant was Hamilton State Bank. When the bank left the building around 1930, Woolworth’s took over the space until the mid-'80s.

The architect was Harry Hale Waterman, who is better known for several elegant homes he designed in the Beverly Hills and Morgan Park neighborhoods, including his own.

The original 1911 Ettleson building was much smaller. An addition on the northern end was made in the late 1920s by architect Alfred Alschuler, who continued the eagle motif. Much of Alschuler’s ground-floor storefront was removed in the ‘80s or ‘90s when the vinyl windows and white brick we see today were installed. Alschuler was a prolific Chicago architect who designed many factories, skyscrapers, department stores and synagogues including Anshe Emet synagogue right around the corner from the eagles building, and one congregant owned the eagles building.

Today, a mix of retail and restaurants inhabit the building. The façade has been deteriorating for years and there have been proposals to tear down the building which neighbors have opposed. A new plan for redeveloping the building involves stripping the façade and reattaching it to a new seven-story mixed use development at that corner.