Boats fly by at speeds up to 150 miles per hour on an 800-foot course. There is drag boat racing every Thursday night all summer long at Blarney Island on Grass Lake. Chicago Tonight's Jay Shefsky goes to the races and takes a 94 mph ride on a race boat.

Jay Shefsky: Blarney Island in far north suburban Antioch is a bar with a well-deserved reputation for partying hard.

With theme nights like “anything but clothes” – featuring an expert body painter – “Blarney Gras,” and “drink us dry” weekend, Blarney Island patrons have come to expect a rowdy good time.

Blarney Island really is an island … sort of. The whole bar is the island, out in the middle of Grass Lake – part of the Chain O’ Lakes region – 60 miles north of Chicago.

You get to it on your own boat or on the Blarney Island ferry which leaves regularly from the Port of Blarney restaurant on shore.

That’s also where the racers launch their boats. 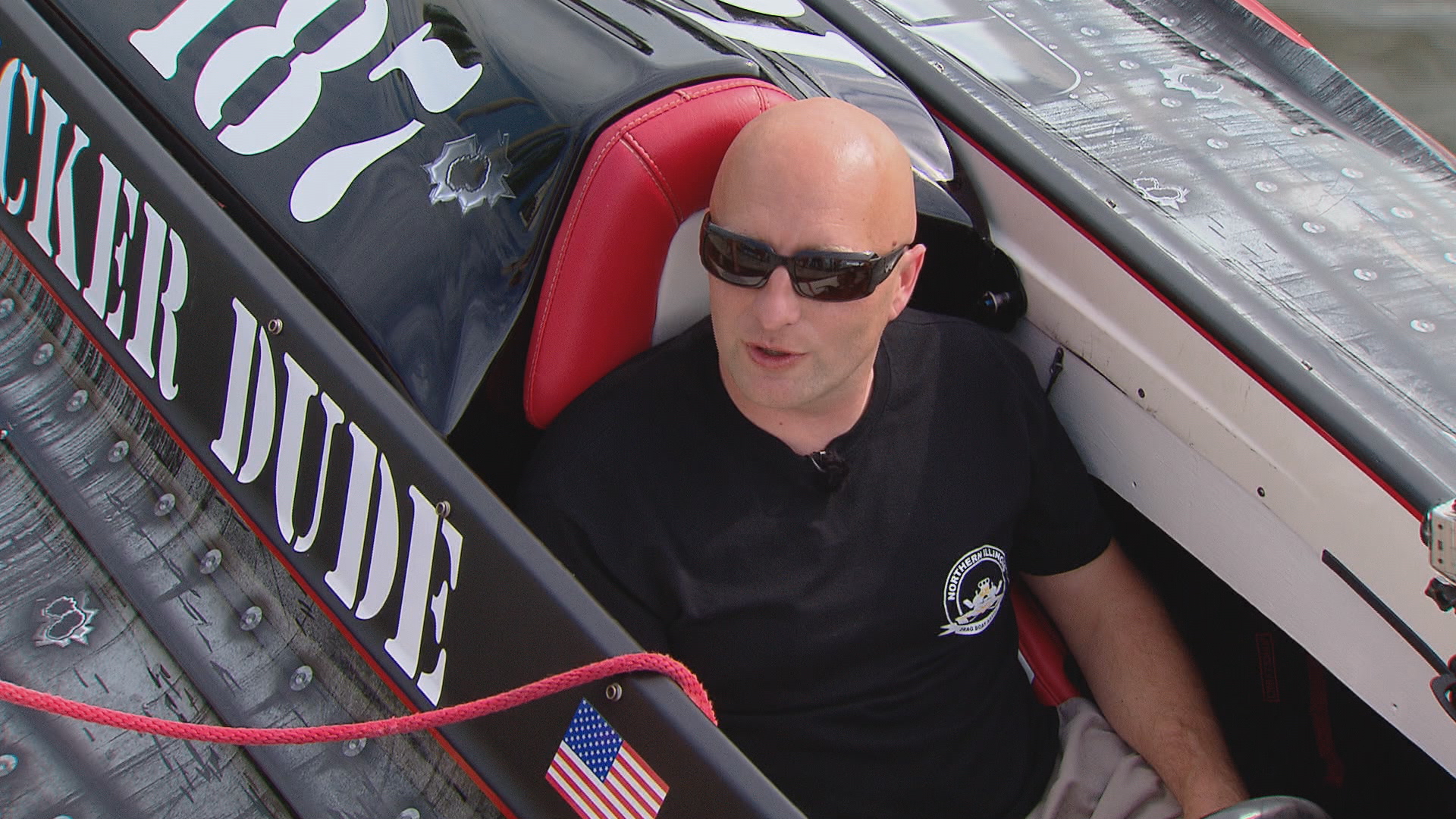 John Groth: I own Groth Manufacturing in Carpentersville, Ill. Speed is a sickness that there is no cure for.

Rob Hardman: It’s been around in some fashion since 1901. It’s got an incredibly storied past, including Al Capone controlling it during prohibition.

JS: The Al Capone part may be legend, he admits. But Capone did spend a lot of time in this area and one of his men apparently did own the bar that is now Blarney Island.

And there’s been boat racing here for a long time.

RH: It was an informal thing that actually went on in Mineola Bay and Fox Lake. 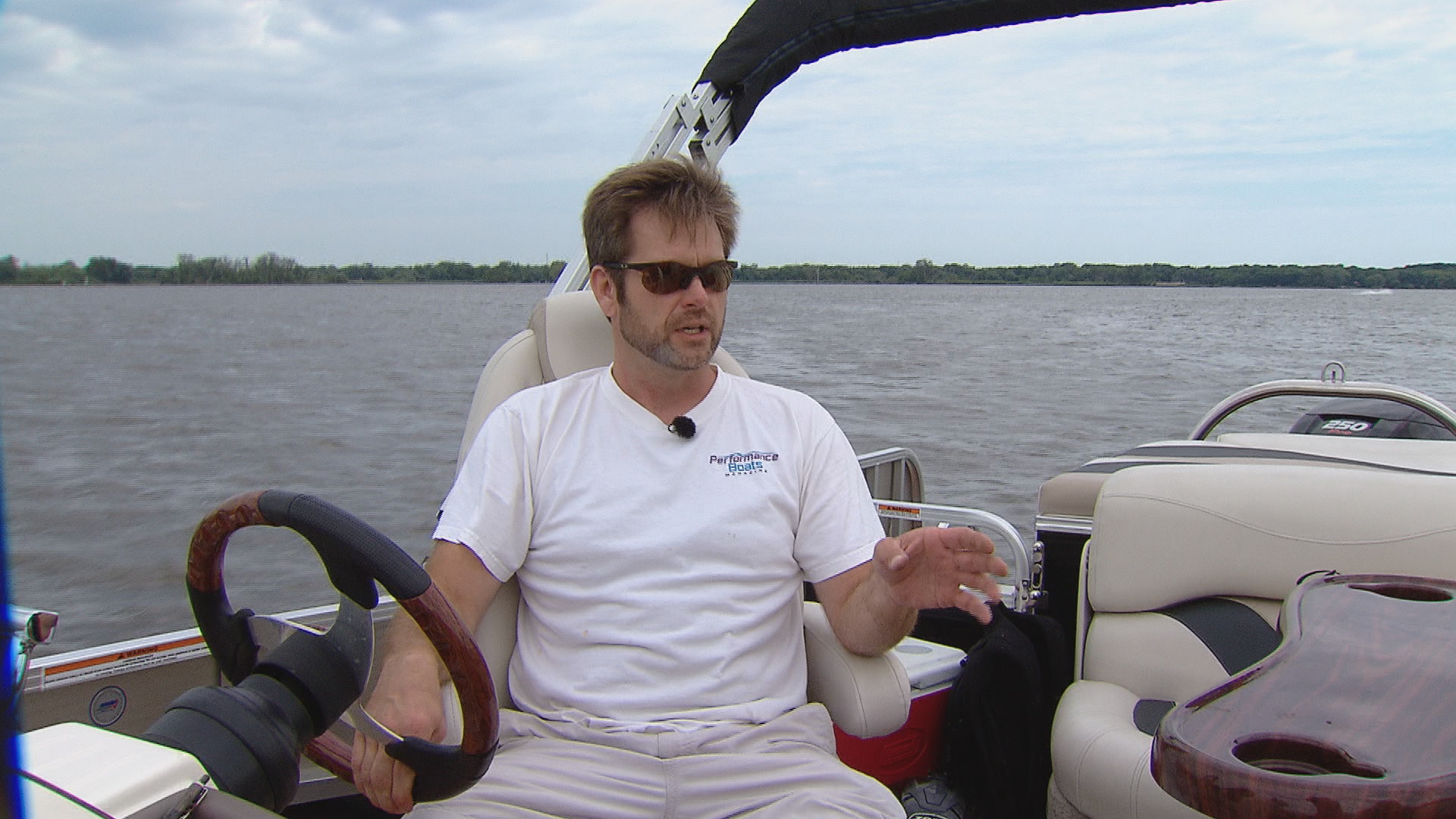 RH: And eventually as the people got organized it moved to Blarney Island where there was a formal drag course set up.

BK: And by the ‘70s and ‘80s all the performance that you know from the dragster days, they started applying that to water and going over 100 mph.

RH: We’re the only place in the country that does grassroots racing every week, every Thursday night from Memorial Day to Labor Day.

JS: As each class is called, the boats move from what they call “the pit” to the racecourse, not missing the chance to strut their stuff.

There are inboard motors and outboard motors, producing anywhere from 200 to 2,000 horsepower. Some use regular gas, some aviation fuel, some use blown alcohol – whatever that is.

Just like at a drag strip for cars, the boats approach a starting line that has a traffic light they call a Christmas tree, and they wait for the light to turn green.

That’s one way that racing here is different from professional boat racing. 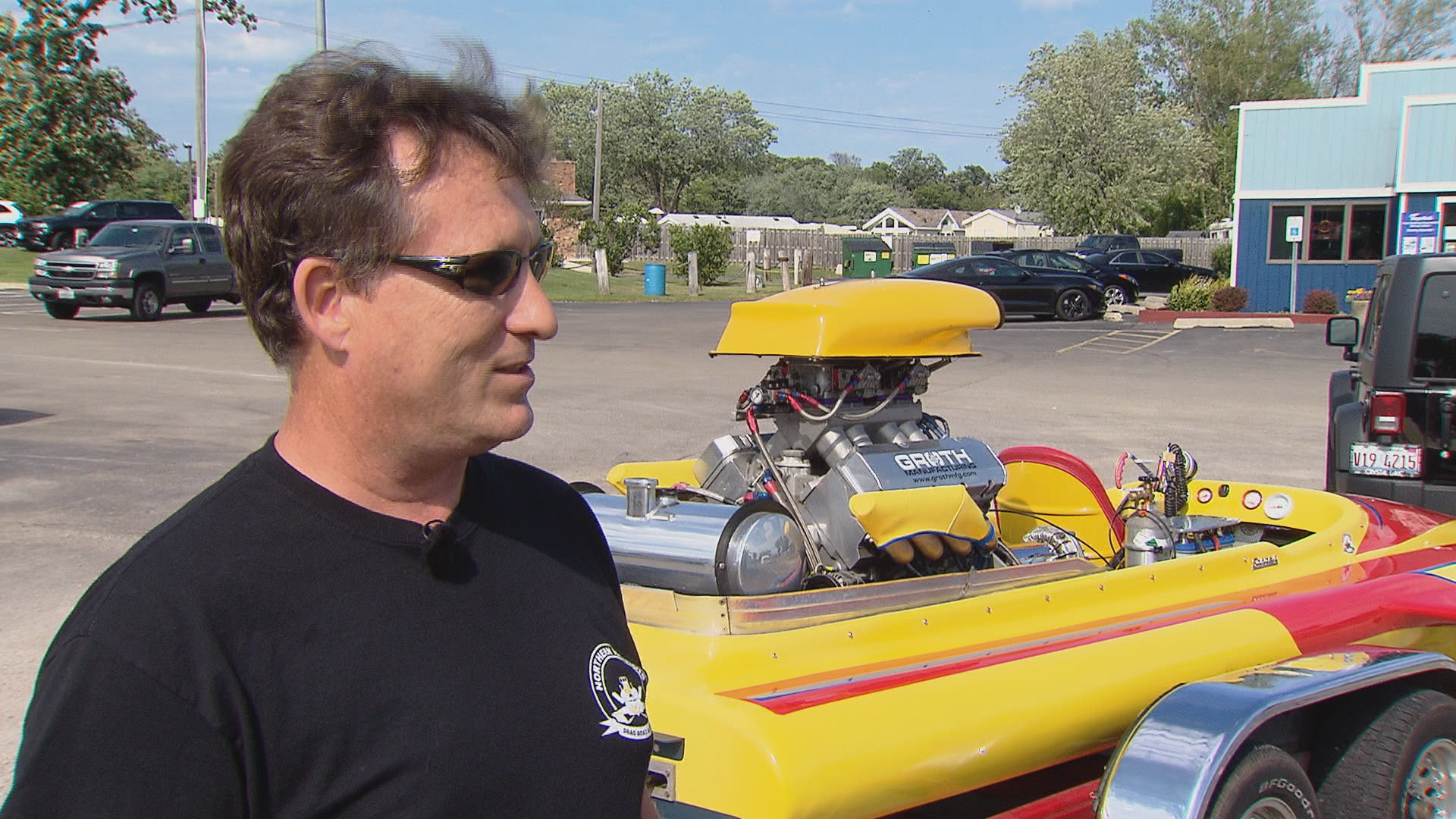 John Groth JG: In the pro races you’re racing against a clock. I wanna race against the guy next to me, that’s what makes it fun. Whoever gets there first wins. That’s the kind of racing I want to do.

JS: Over the years, as the boats got faster, they’ve had to shorten the racecourse.

BK: Blarney Island had a quarter-mile drag strip at first, but then they changed it to 800 feet. They just didn’t have enough room because the boats were going so fast they couldn’t slow down.

JG: This is a 632 dart tall-deck. I use 116 Sunoco racing fuel in this and I’m pushing about 1,300 [horsepower] naturally aspirated, which is phenomenal.

Bottom line: It all makes John’s boat go fast. He’s been first in his calls all year and has won his class every Thursday all year.

JG: We race in choppy waters. Sometimes my butt flies out of the seat. The rescue team is ready to come and get me! In the pro races if there’s a ripple in the water sometimes they just don’t race. We’re crazy out here, we really are.

JS: With these crazy fast boats and variable lake conditions, safety of course is a big concern.

RH: Amazingly, with a race program that dates back to the ‘70s we’ve had no serious injuries. Some minor crashes – the boats have disintegrated, but not the people, luckily.

JS: This 2010 YouTube video shows one crash at a Blarney race. The driver, they say, was not badly hurt.

But when there are problems, Blarney Island has help standing by.

RH: We’ve got a helicopter on site, we’ve got a crane boat in case there is a crash. We have rescue divers, we have a paramedic boat.

JS: And the boats themselves are equipped with special safety gear.

JG: As you’re going down the track, you really can’t turn your head because the safety gear, the straps are on you, to keep you from breaking your neck if you fall off the boat, we wear a parachute jacket that latches on to a hook inside the boat so if something does happen it pops the parachute and slows us down before we hit the water. That’s a nice thought.

JS: Billy Kosick has seen a few messed-up boats. He owns a boat repair business nearby.

BK: You’re doing 150 mph and then all of a sudden one little swell gets you – bang! – and you will break the hull. That’s when you see boats that have catastrophic failure; just break apart into nothing.

RH: I can’t imagine that anyone could ever start a drag race program today because of all the governmental restrictions, insurance, etc. I think the only reason we exist is because we’ve been around for so long, and because we’ve got a program –we’ve got it down.

JS: At dusk, the racing ends but the party continues.

An announcement comes over the loudspeakers: Stick around till midnight and I’ll buy everyone a shot!

JS: Frankly, I could have used a drink by then, because earlier in the day I accepted an offer to go for a ride with Jeff Houghtaling, who is currently leading the “outlaw outboard” class.

Was I crazy? Maybe. 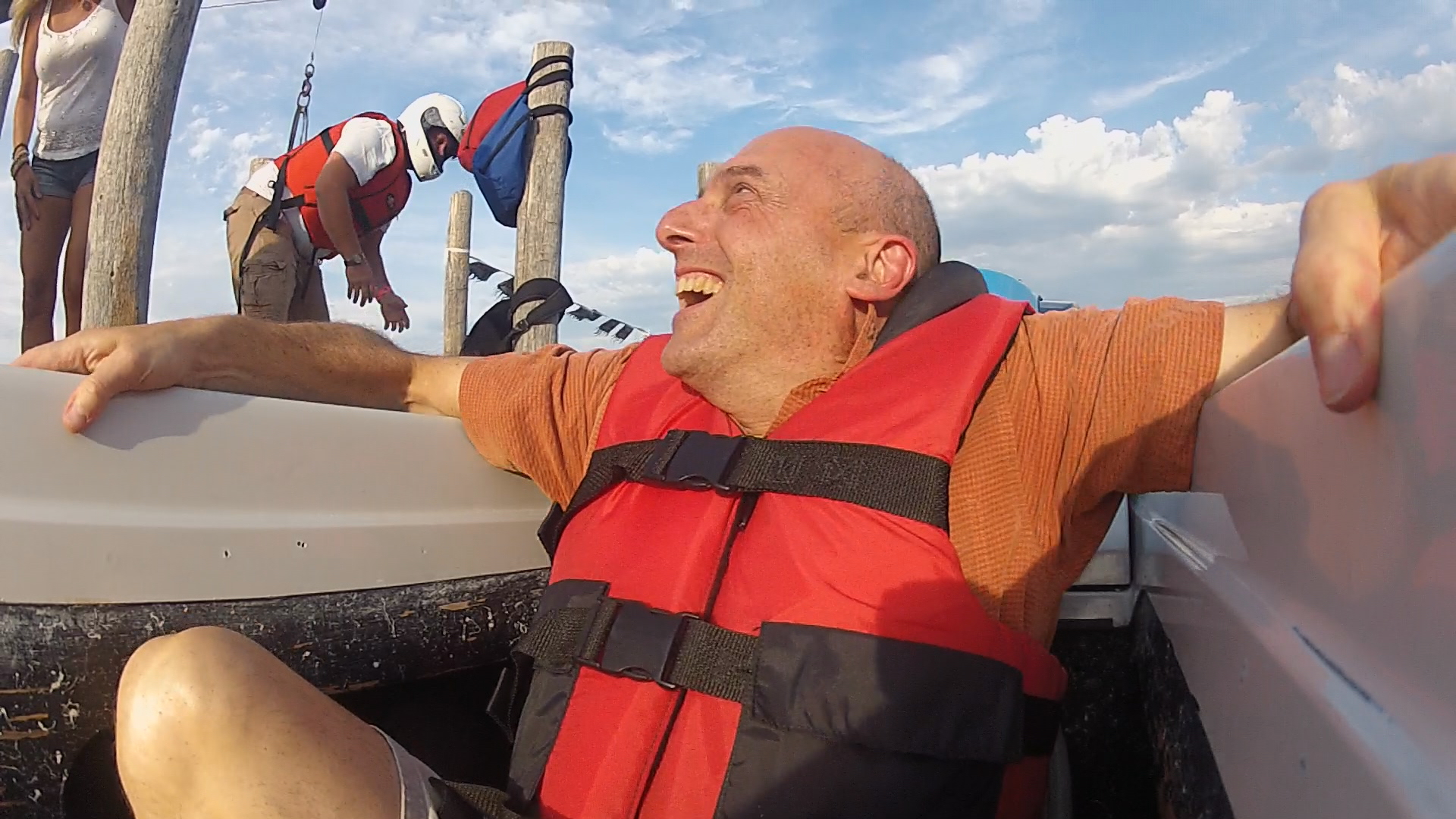 Jay Shefsky after his 95 mph ride. 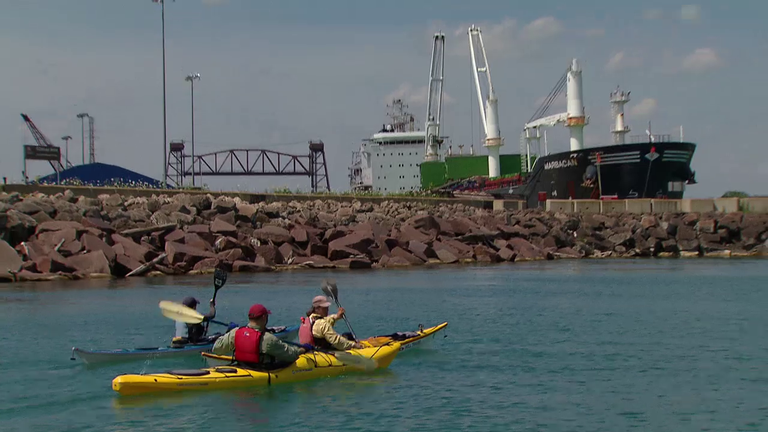 • Chicago's Other River: Exploring the Calumet by Kayak