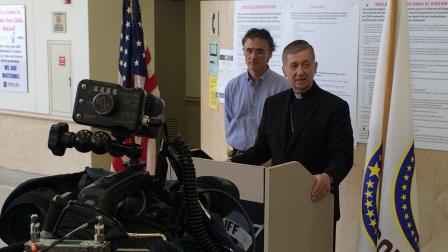 According to a release from the Cook County Sheriff's Office, Cupich's visit aims to highlight the importance of service to those in prison, many of whom are poor, ill and disenfranchised.

“The archbishop came out today to walk with me around the jail to talk with detainees, to see some of the jail, but really frankly to talk with some of the detainees and to see some of the different things going on here at the jail,” Dart said during a press conference after the tour. “I can’t tell you how grateful I am [that] he took the time. I wish you could’ve seen the faces of the detainees; This truly was for many of them the greatest thing that’s ever happened to them. They were incredibly moved and it was an amazing thing to see.”

Cupich described his tour of the jail as “an opportunity to put the spotlight first of all on dedicated men and women who are part of the prison system,” who work to create a humane environment.

“From my experience and in talking with them, [they] really try to create an environment that is very humane given the fact there is a population sometimes who have been involved with violent crime and also various crimes against society and yet there’s a respectfulness on their part to the prison population that was so very evident to me today,” Cupich said following his tour. “So I’m grateful to be supportive of them and at the same time to realize there are people here who have made mistakes and are looking for a way to move forward. That was surely evident in the discussions that I had with some of those who are incarcerated here. And there really is a full spectrum of the reasons why people are here from DUIs all the way to violent crimes. And it’s clear to me that there’s a story, a human story behind each individual that’s here.”