View a gallery of Salcedo's works. 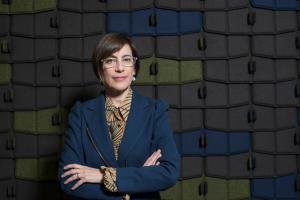 Doris Salcedo has been an acclaimed artist for quite some time. Why now for this first-ever retrospective and why Chicago?

It seems that her work is even more relevant now than when she started. The work that she creates focuses basically on violent conflict and victims who lose their place. It portends the larger economic and political shifts shaping our world. The works are reflective of the upheavals, not only in Bogota, Colombia where she was born and works, but also in different parts of the world. We don’t have to look very far to see where people are people dehumanized and where social contracts are being broken.

As for why Chicago, I’m proud to say that it’s because Doris wanted to work with our team. I’ve had a great working and personal relationship with her ever since we met for a show at The Art Institute in 1996. So, nearly 20 years of trust and friendship is the basis for her trust in the Museum of Contemporary Art in Chicago. And she’s compelled to Chicago because it’s such a civic city and very attuned to the issues in her work.

Speaking of Chicago, one of the pieces “Disremembered” was inspired specifically by interviews with the families of gun violence victims in the city. Talk about that a bit. 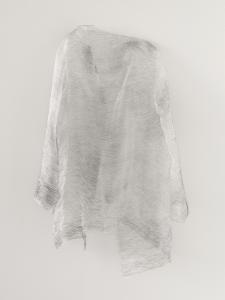 It’s a beautiful piece that constituted 12,000 needles sewn through silk, creating a tunic that hangs from the wall, as if it’s missing the person that wears it on the daily. It’s a shroud, a hair shirt if you will, that symbolizes the pain, the mourning, the condition of a mom who has lost a son, sometimes her only son, to gun violence. Doris wanted to both honor these victims and create a portrait of the survivors.

That seems like an immense amount of work. In fact, many of her pieces often look “found” but are very carefully and skillfully crafted.

Absolutely. There are 12,000 needles in each of the three tunics of “Disremembered.” The needles are bent through a heating process and polished by hand to remove the residue from the heating. That work is necessary in order to earn the right to speak for the subjects. They look found because they use the vocabulary of the domestic sphere, the recollection of sitting around a dining room with those you love. But you look closer and you see something is awry in a place that is supposed to be safe, because of something has been ruined, because of a death or a tragedy.

Tell us a bit more about her research process.

Before she creates, she does a tremendous amount of research. She conducts hours of first-person interviews with witnesses. She reads; she’s influenced by poetry and literature. The labor involved in each of her works is immense. 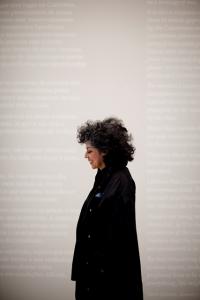 Many of Salcedo’s themes -- confronting political violence, memory, war, trauma -- are tied to Colombia. Do you think you have to know her background to fully appreciate the works?

No, not at all. The work is affective, and hits you in your heart and your gut and your brain. It initially came from her response from her 50 years of civil war, but it has long evolved to encompass social justice issues across the world, and she conducts intensive research, into slave labor and immigration labor. But you don’t need to know any. We’re not looking at politics, we’re looking at art. What joins the two are ethics, how are you going to respond when you are moved.