Author Steve Levine had fly-on-the-wall access for two years to "the battery guys" at Argonne National Laboratory -- America's team in an international competition to build a battery that will change the world. Levine joins us to talk about his new book, The Powerhouse: Inside the Invention of a Battery to Save the World. 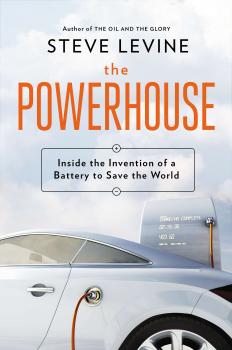 Wan Gang worried Jeff Chamberlain. Before returning home to Beijing, Wan, China’s minister of science, had asked to visit two places—Argonne National Laboratory, a secure federal research center outside Chicago, and a plant near Detroit where General Motors was testing the Volt, the first new electric car of its type in the world. Jabbing his finger into a book again and again, Chamberlain said that Wan was no mere sightseer. He had a mission, which was to stalk Chamberlain’s team of geniuses, the scientists he managed in the Battery Department at Argonne. They had invented the breakthrough lithium-ion battery technology behind the Volt, and Wan, Chamberlain was certain, hoped to appropriate Argonne’s work. But Chamberlain was not going to let him. A war was on, he said—a battery war. And he was right.

Wan turned up at Argonne in the summer of 2010, animated and unfailingly polite, with gentle eyes and the look of his fifty-eight years. A senior Department of Energy official climbed onto a bus alongside him and his retinue for a tour of the laboratory, and Wan posed a fusillade of questions while offering his own observations. “We are experimenting with the creation of hydrogen fuel from the gas created by waste,” he said. “It costs half the price of gasoline.” Such talk charmed the battery guys. He was himself a materials scientist, with his own record of advances, speaking openly with equals. It helped that Wan did not explicitly mention nickel manganese cobalt, or NMC, the compound at the core of the Argonne invention contained in the Volt. In addition, he had quite a personal story. Growing up in poverty in the countryside surrounding Shanghai, Wan recalled going hungry and navigating fields in a tractor, the only motor vehicle he ever drove. From there, he worked a series of research jobs and won his first break— admission to a Ph. D. program at the Clausthal University of Technology in Germany. After he graduated, Audi hired him as an engineer and he rose to be design manager in the automaker’s Stuttgart-based electric car unit, an exceedingly prestigious position. In all, he had been working at Audi for eleven years when, one day, his former academic mentor at Shanghai’s Tongji University visited the plant. He suggested that Wan transform his own country, and not Germany, into an electric-car powerhouse. Wan returned to China, where another break came: President Hu Jintao requested that Wan formulate a policy on electric vehicles and make China the world’s number-one producer of them. He elevated him as the country’s first non–Communist Party minister since the 1950s. Now it was Wan’s job to execute Hu’s will. The prevailing view abroad was that, it being China, Wan would succeed. Which brought the Americans back around to their original angst after having warmed to him.

The evening before his visit to Argonne, Wan was munching shrimp hors d’oeuvres at a reception on the terrace of the Kennedy Center in Washington, D. C., when an American recognized and approached him. Wan seemed to have been waiting for just this chance conversation. He took a last bite and passed the tail to an aide. “Why don’t we sit over there,” he said, gesturing to the café. They exchanged talk on personal topics, and when they turned to cars Wan said he agreed that a race was under way among industrialized nations. All of them were determined to create a great new battery that in turn would propagate the large-scale manufacture of electric vehicles. They were merely using different methods to get there. Wan was too genteel to predict outright that China would win but cited markers that would signal progress. “The big thing is getting the first one percent of the market,” he said, meaning 150,000 electric cars on China’s roads. “That will prove the technology. From there, it won’t be that hard to reach ten percent of the market three or four years after that.” His initial goal was the sale of 500,000 cars, about the same aim as Barack Obama had established for the United States, and one million by 2015. It was a lot of cars. But the numbers also reflected bravado. Both countries inflated their numbers to impress and psych out rivals.

The next morning at Argonne, Wan and his hosts filed into a conference room. A senior American scientist named Al Sattelberger led off the presentation. He flashed slides on two large screens. Wan interrupted.

“You have made remarkable achievements here,” he said. “So today I have many questions for you.”

The room erupted in laughter. It was mostly the Americans, who were sweating. Argonne possessed formidable intellectual firepower and inventions, such as the American patent for its NMC breakthrough. It achieved three grand aims—allowing the Volt to travel forty miles on a single charge, to accelerate rapidly, and to do both without bursting into flames. But despite the recent accomplishment, the United States trailed far behind its rivals. After more than a decade of manufacturing, Japan and South Korea controlled two thirds of the market for consumer batteries such as AAs, AAAs, and the lithium-ion technology used in smart phones. That gave them preeminence on the proving ground where new technologies were validated or broken: the factory floor. Most winning inventions became so when the kinks were worked out through trial and error with actual consumers—what the Japanese and South Koreans had done—and otherwise might be destined for oblivion. Now, the Chinese had adopted the principle and issued an edict requiring some two dozen companies to market models within two or three years. That had led Chinese manufacturers like BYD, Chery, and Geely to introduce experimental electric vehicles. None of China’s rivals, the United States included, could simply decree the manufacture of one million electric cars with the confidence that they would actually appear. China’s leaders had accomplished innumerable such feats. They terrified Jeff Chamberlain.

From The Powerhouse: Inside the Invention of a Battery to Save the World, on sale now. Reprinted by arrangement with Viking, an imprint of Penguin Publishing Group, a division of Penguin Random House LLC. Copyright © 2015 by Steve LeVine.

In 2013, Professor George Crabtree of Argonne National Laboratory joined us to talk about the national push to build a better battery, its capacity to transform our future and just why it presents such an in incredibly complex challenge. Watch the interview below.