A Fiscal Roadmap for Illinois

With just two days until Gov. Bruce Rauner delivers his first budget address, analysts are debating how best to tackle Illinois’ massive budget deficit. The Institute for Illinois' Fiscal Sustainability at the Civic Federation has released a five-year state budget roadmap that it says will stabilize Illinois while protecting important government services. The group says its plan will eliminate the state's unpaid bills by Fiscal Year 2020 and make sure state budgets are balanced. We'll discuss the proposal with the Civic Federation's president, Laurence Msall.

As lawmakers and stakeholders await Gov. Bruce Rauner’s budget proposal this week, the Institute for Illinois' Fiscal Sustainability at the Civic Federation has released a five-year roadmap that it says will stabilize state finances and protect government services.

The group says its plan will eliminate the state's unpaid bills by Fiscal Year 2020 and make sure state budgets are balanced. (However, paying off all of Illinois’ bills is contingent on the state’s pension reform law surviving a state Supreme Court review – more on that later.) Among other things, the 56-page plan calls for holding down state spending growth, increasing the income tax rate, taxing some retirement income and services, and temporarily removing the sales tax exemption for food and non-prescription drugs.

Civic Federation President Laurence Msall said the budget passed by the General Assembly in May 2014, which didn’t take into account a scheduled reduction in the income tax rate, has allowed already-troubled state finances to further deteriorate.

“The hole has gotten much deeper [since then] … and the state’s financial situation is getting dangerously close to having a very negative impact on the state’s credit, its ability to pay its bills, and its ability to continue to operate,” Msall said.

One of the Civic Federation’s proposals is to retroactively increase the income tax rate to 4.25 percent for individuals and 6 percent for corporations as of Jan. 1, 2015 in order to make up for lost revenue. According to the state’s Commission on Government Forecasting and Accountability, Illinois’ net personal income tax collections in January dropped by $124 million. The Civic Federation’s report says income tax revenues are expected to fall by more than $5 billion between Fiscal Years 2014 and 2016. 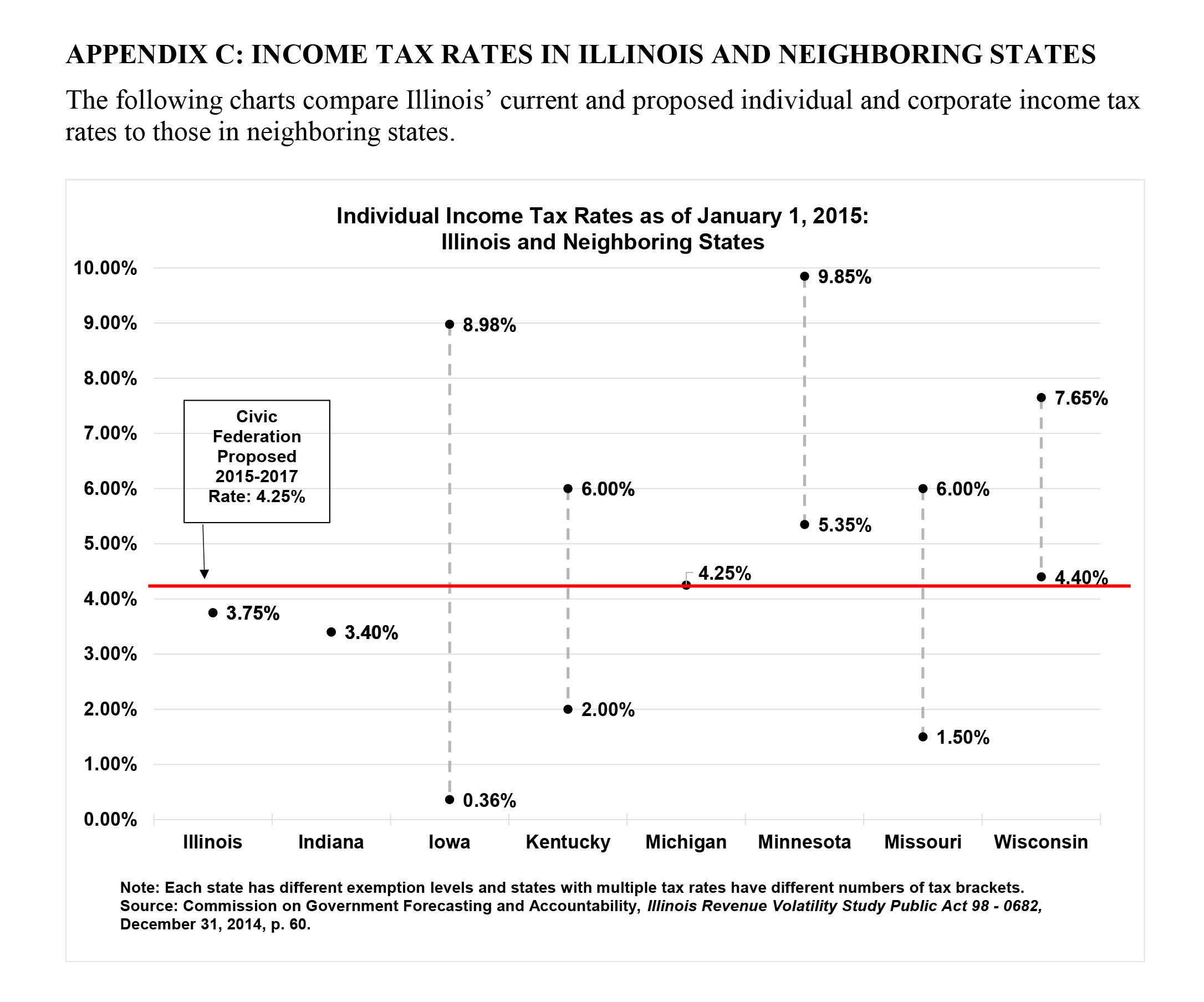 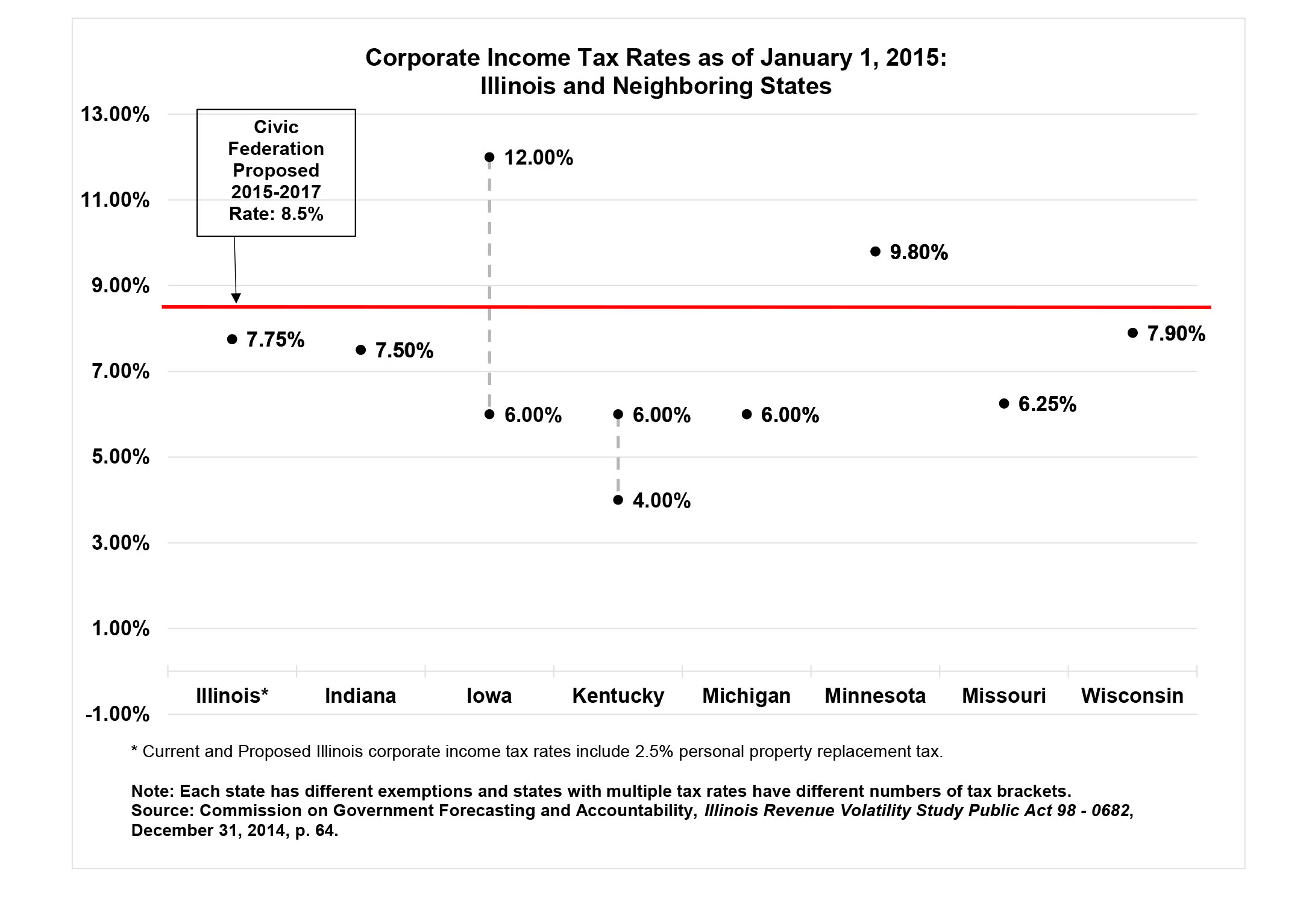 The Civic Federation’s comparisons of Illinois’ current and proposed individual and corporate tax rates to our neighbors, as it appears in the group’s five-year roadmap.

While the group’s plan calls for a rate hike, it wants to see the income tax drop on Jan. 1, 2018 to 4 percent for individuals and 5.6 percent for corporations. Ralph Martire, executive director of the Center for Tax and Budget Accountability, says while income tax rates do need to be adjusted, it’s not sound policy to temporarily increase the rates and call for a rollback in three years.

“You’re implementing artificial changes in policy that aren’t based on anything economically driven – rather, they’re politically driven,” Martire said. “The problem with our revenue system isn’t temporary, it’s structural.”

Martire says a more sound approach is to adjust the rates to account for the gap between the revenue Illinois takes in and what it spends on services, like education and health care. 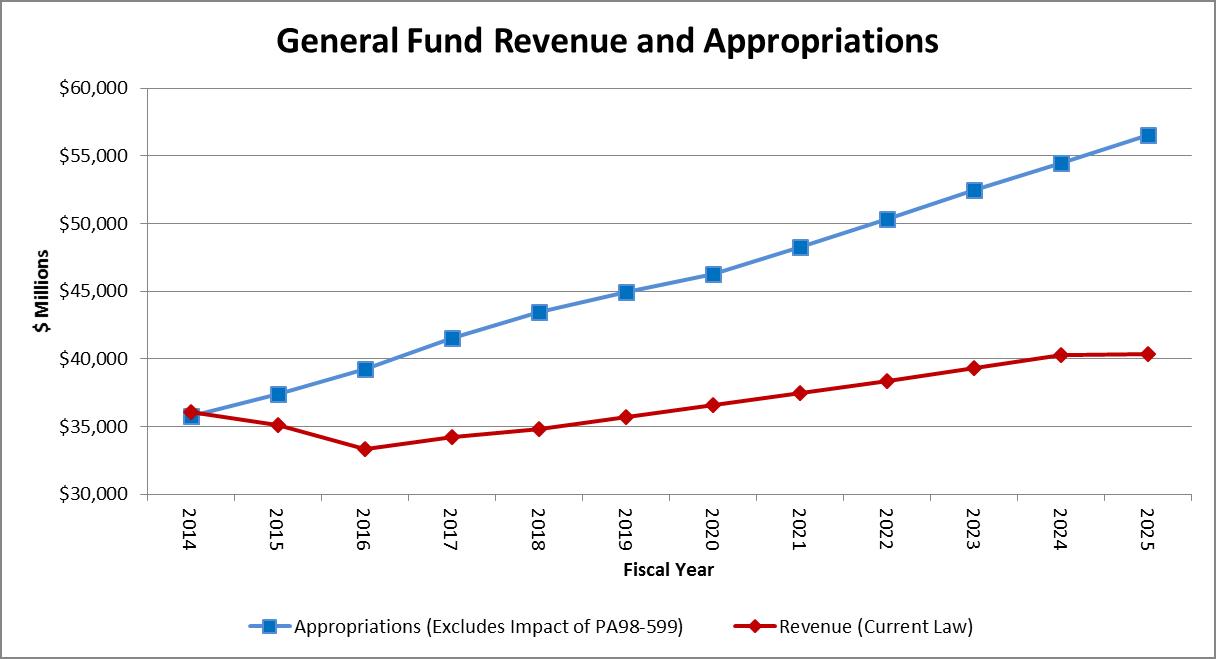 A graph representing CTBA’s calculations of how much Illinois spends versus how much it takes in.

Other key elements of the Civic Federation plan include holding down discretionary spending growth, increasing the Earned Income Tax Credit for low-income Illinoisans, and taxing non-Social Security retirement income for people bringing in more than $50,000. The Federation notes in its report that of the 41 states with an income tax, Illinois is just one of three that doesn’t tax pension income.

While taxing some pension income will bring Illinois in line with its neighbors and the federal government, Republican State Rep. David Harris of Arlington Heights says it’s among several of the Civic Federation’s proposals that will face an uphill political battle.

“There’s going to be a lot of pushback from a lot of retirees, even though you can argue that Illinois is one of three states that exempts retirement income,” Harris said. “Voters don’t vote in other states, they vote in Illinois.”

Increasing the EITC is one of the roadmap’s proposals that’s generally in step with Gov. Rauner’s so-called “Illinois Turnaround Agenda,” distributed to lawmakers before his State of the State Address. Also in line with the governor’s vision is a call for expanding the sales tax to include 32 categories of services that are currently untaxed. The CTBA’s Martire agrees with a call for expanding service taxes, but disagrees with some of the categories.

“What you really want to do is just go after consumer services, not business-to-business and not professional services,” Martire said. “Unfortunately, the governor’s proposal hits some of those.”

Martire prefers focusing on things like health clubs, lawn care, and auto repair. And he thinks a broader expansion of taxes on consumer services than the governor’s called for will generate significantly more revenue and go farther in plugging Illinois’ budget hole.

Msall says his group is “not pleased to be in a position where we make such painful recommendations. Eliminating the exemption on food and non-prescription drugs is a very dramatic change, but it’s necessary because of the legislature’s failure to balance the budget.”

Eliminating that tax exemption is another place where economic theory is likely to run into political reality, says Rep. Harris. And as Illinois’ rookie Republican governor gets ready to make his budget proposal to a General Assembly with a Democratic supermajority, politics versus economics will continue to be an important push and pull as the state tries to dig out of its fiscal hole.

“The top priority is now,” said State Sen. Kwame Raoul of Chicago. “We’ve got the budget address, which customarily focuses on the upcoming fiscal year.” But the gap in the current budget puts Illinois in a “unique situation.”

“We have to figure out, how do we get through the rest of this fiscal year without hurting real people,” Raoul said.

“If the court doesn’t allow the changes to go forward, our plan would incorporate the increased contributions required under the existing law,” Msall said.

But the group’s plan would then fall short on its goal of wiping out the state’s unpaid bills in five years.

Msall says his group’s proposal is just that, a proposal. His hope is to get lawmakers and the public talking about how to make long-term improvements to Illinois’ rarely balanced budget and often unstable finances. He hopes changes can stabilize the state “and move it into a place where we can attract business to employ people, rather than frightening them away.”

Gov. Rauner will deliver his budget address on Wednesday, Feb. 18.