Chicago Cubs Hall of Famer Ernie Banks died Friday, Jan. 23. The two-time National League MVP was 83. We take a look back at his career and his impact on baseball with Chicago Tribune sports columnist Fred Mitchell, and Phil Rogers, MLB.com columnist and author of Ernie Banks: Mr. Cub and the Summer of ’69.

Watch Banks in a 2005 episode of the Friday Night Show from WTTW11's archives.

Read an excerpt from Ernie Banks: Mr. Cub and the Summer of ’69. 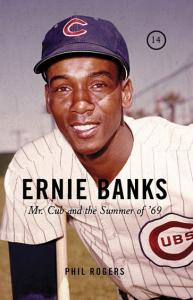 Just one more hit. One more lousy hit. Is that too much to ask?

That’s what Ernie Banks was thinking when he stood in the on-deck circle at Shea Stadium, swinging a weighted bat and watching Ron Santo dig in to hit against Jerry Koosman. The Cubs had men on first and second and no outs in the eighth inning, tied 2–2 with the New York Mets in the biggest game of Banks’ long career.

He was in his 17th season, and 1969 had been unlike any of those before it. The Cubs were baseball’s lovable losers, in first place for only 37 of 2,586 days in the previous 16 seasons, just 12 of which came after the end of April and none later than July 4.

This was September, and the Cubs led the Mets by 2½ games. The New Yorkers had been gaining ground for weeks, causing the Bleacher Bums to squirm on their barstools back at Ray’s Bleachers behind the center-field wall of Wrigley Field in Chicago. This was the Cubs’ chance to show the Mets that the race was going to go to the team that had led all season, the one that had chased success the longest.

No player was ever more optimistic than Banks. He expected Santo to come through, even if his elbow was killing him after being drilled by Koosman earlier in the game. But the Cubs’ captain hit a ground ball to Mets shortstop Bud Harrelson, who started an easy double play.

Two outs. Glenn Beckert standing on third base with the go-ahead run. This wasn’t going to be easy, but Banks had a chance.

As the 38-year-old first baseman walked to home plate, the scoreboard showed he was batting .253, his career average in decline. His chances against Koosman, a hard-throwing lefthander, probably weren’t that good. Banks had homered off him here back in July, but that was one of only four hits in the seven games he had faced him.

Banks wasn’t thinking about any of this, at least he was trying not to think about any of this. He was doing everything he could to clear his head, to make the task in front of him as simple as possible.

He had once told his friend Lou Brock that hitting was about three things— the baseball, the pitcher, and the hitter. And once the pitcher threw the ball, he was out of the equation. It was just the hitter and the ball, simple as that. “So whaddya mean, you can’t hit Koufax?” he asked Brock.

This was no different. It was a baseball, a pitcher, and a hitter. And Banks knew he had an advantage. He had good hands, quick hands, hands he had used to pick cotton as a boy, hands that would pull the cotton from the bulbs and stuff it into a sack as fast as they could. The journey that had brought him to a packed stadium in Queens, New York, was the essential American Dream.

He had been blessed with ability and had maximized it by finding strong role models and learning from them, by showing up for work day after day with a baby-faced smile and a determination to treat others as he hoped to be treated. He never felt he was owed anything, including a hanging curveball with two outs and the go-ahead run on third base.

But if Koosman happened to hang a curve…

This excerpt from Ernie Banks: Mr. Cub & The Summer of '69 by Phil Rogers is printed with the permission of Triumph Books.  For more information, please visit www.triumphbooks.com/ErnieBanks.