Toni Preckwinkle is heading into her second term as president of the Cook County Board. She hopes to reform juvenile criminal justice and reduce the daily jail population, and has goals for the regional economy and public health. And though she campaigned on a tax rollback, she's declined to say whether a hike could be in store for the 2016 budget. We talk with President Preckwinkle about what she hopes to accomplish and the challenges in store over the next four years.

On Jan. 12, Preckwinkle discussed her second term agenda at the City Club of Chicago. In her speech, Preckwinkle outlined her main priorities which include public health, public safety, and economic development.

Watch Preckwinkle’s speech at the City Club of Chicago.

During her first term, Cook County worked to enroll eligible Medicaid patients in CountyCare. With more than 96,000 members enrolled, the next four years will be about retention and expansion of the patient population as well as improving the patient experience.

The county is investing in new technology and launched a new patient portal, MyCookCountyHealth, which nearly 12,000 patients are using.

There’s an increased emphasis on ambulatory care, including expanding services and capacity and upgrading technology and equipment. In addition, the county is adding Saturday clinic hours and creating a call center and centralized scheduling process.

“In turn, we will no longer be primarily a health care system of last resort for those most vulnerable, but a provider of choice for all residents,” said Preckwinkle. “We will reform our health care system by building on our existing strengths: top notch health care professionals, internationally recognized research, community-based care and unmatched compassion.”

Preckwinkle will continue to work for criminal justice reforms during her second term. She called for the continued reduction of “over-reliance on pre-trial detention,” citing that only 7 percent of people in jail are currently serving a sentence and 70 percent in jail are awaiting trial for a non-violent charge. Those people are detained because they cannot pay their bail, Preckwinkle said, adding that the majority of people accused of non-violent crimes that appear in bond court can be released without impacting public safety.

In order to achieve that goal, Preckwinkle proposed using a data-driven risk tool that would identify appropriate defendants to release, and those who are released will be given clearly defined conditions and assigned appropriate levels of supervision.

In addition to reducing the jail population, Preckwinkle will continue to reduce the number of youth in temporary detention and work toward restoring judicial discretion to automatic transfers.

“Previously, judges decided whether a young person would answer serious charges as a child in need of intervention and rehabilitation, or as an adult. Now, youth are automatically tried as adults solely on the charge brought by the prosecutor,” she said. “The youth receives no hearing to determine whether they are better served in the juvenile system or in the adult system.”

Pushing for an end to automatic transfers will be “my top criminal justice priority in Springfield this coming session,” she said.

While Preckwinkle said she cannot create jobs, she vowed to work to do more to create a more business-friendly climate. Preckwinkle detailed her four-part plan for the economy: run an effective, efficient government; work with stakeholders throughout the region; pursue strategies based on maximizing existing strengths; and make sure all communities are able to contribute and benefit.

Preckwinkle emphasized the importance of the economic health of the 132 municipalities that are part of Cook County.

“They are our partners in growing the economy. Some of those municipalities are job centers. Some are commuter towns. Some provide recreational opportunities or serve as retail centers. Some face fiscal challenges and others do not,” she said. “The important point is that they are all part of the economic fabric of metropolitan Chicago. If you read a headline about problems in one of our communities, it is not someone else’s problem. It is a problem for all of us. We can only have success as a region if we ensure that everyone contributes to, and benefits from, our economic growth.”

View a timeline of her career. 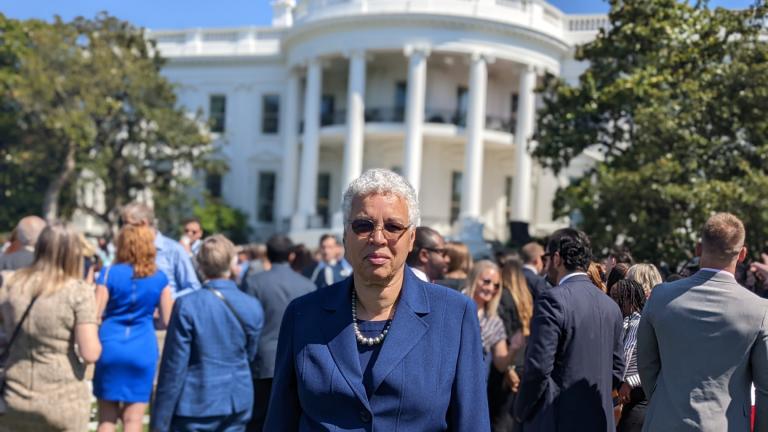