Abner Mikva on a Lifetime of Public Service

Abner Mikva talks about a lifetime of public service and what it was like to receive the Presidential Medal of Freedom, the nation's highest civilian honor, from President Barack Obama.

View a timeline of Mikva's career.

Read an interview with Kelly Rolf, the Director of Development at the Mikva Challenge, an organization that engages and empowers youth in action civics.

Can you summarize the purpose of the Mikva Challenge, and how it relates back to the Mikvas?

The Mikva Challenge was founded when Abner Mikva retired from public service in the late ‘90s. He had been a real mentor to a generation of public servants—people who worked for him on campaigns, clerking, or working with him when he was in Congress.

When he retired, they wanted a fitting tribute. They met with him and his wife [Zoe], and talked about creating an internship program in Washington. The story goes, he looked around the table and said, “Well, tell me about the moment you first got involved with politics.” Everyone went and told these stories about how they got hooked in high school.

They decided against a college internship program, and decided to bring a program to Chicago for city kids, because young people of color in public schools are not really part of the political process. Fifteen years later, it’s a core part of our mission and work. Students get to experience what it’s like to be involved with democracy. Nothing is “mock.” It’s real, hands-on experience. 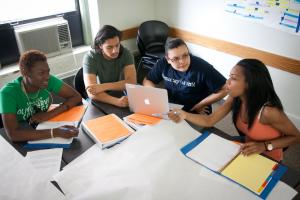 A few years ago, the youth commission that works with Mayor Rahm Emanuel was looking at high dropout rates. One predictor is low attendance. So what causes low attendance?

They researched and found that CTA fare to get to school emerged as an important issue. It’s too expensive and so many students have to take it, even if they attend a neighborhood school. It could be a mile or more away, and it’s not safe to walk in some cases.

Ernesto Matias at Wells High School started a program, giving free fare cards to those at risk for dropping out. The youth commission brought this idea to the mayor and suggested the city fund a pilot program for 100 students at five schools each.

It boosted attendance at Wells, so the mayor agreed, and it was a huge success. It was in 11 schools the following year. It really showed a willingness on the part of the mayor to initiate a youth-led solution. It really emboldened the young people. The mayor took them seriously. It’s an example of concrete policies going into place because teenagers are at the helm. 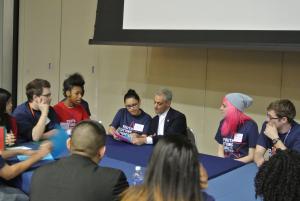 What about future plans?

Our founding program involved getting young people working on the campaigns of their choice, working on phone banks or canvassing. If you get young people out there in the thick of it, that’s what hooks them to a lifetime of civic engagement.

It was a very novel idea at the time. It was transformative for the young people. Since then, we’ve grown to do a lot more work at schools and on the policy-making side. Back then, we were an unknown quantity. Today, we feel more established. We’re real partners with the city and CPS, all while remaining non-partisan and independent.

In the future, we’re replicating our initiative in other cities. We have demand from educators for the curriculum we’ve developed. How do you teach politics without being partisan? How do you help young people connect with resources outside of the classroom? A lot of young people feel cynical. They don’t think it’s stupid, but they look at it and think, “Where’s my place?” Our curriculum focuses on those problems. We have a small pilot program in L.A. with 40 teachers, and we’re working with the D.C. public schools. 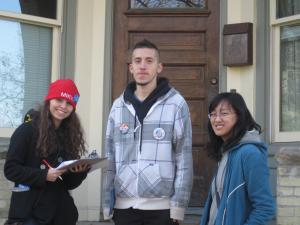 How much are the Mikvas involved with the organization?

Abner is still on our Board of Directors, and Zoe is a life member. They‘re such political people, and really opened their network for us to use. They really trust our board and senior leadership to drive the agency. And Abner attends boards meetings and met with a group of our young alumni the same week he was awarded the medal.

You understand, even now, why young people still look up to him and are inspired by his career. He’s wonderful. He tells you exactly what he thinks. It’s so rare to hear people in politics speak so candidly about difficult issues, such as race. He’s still very connected with us in fact and in spirit.

It’s a fitting legacy for them. All these years, they were in public service. One thing he often says is that the Mikva Challenge was his proudest achievement. Taking youth seriously as our peers and as people helping to solve problems, we really think of that as their greatest legacy. They started a wonderful thing, and it’s going to live for a long time.

Watch an interview with Abner and Phil Ponce on a 2005 episode of Chicago Sunday.

Courtesy of the White House