Sending History Up the River 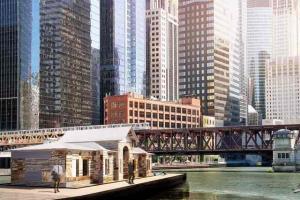 Jeremiah Hulsebos-Spofford is leading a small army of insurgently imaginative artists who were inspired with the idea of taking a museum of African-American history and moving it all over town. While the logistics of actually dislodging the DuSable Museum of African American History from its home on the eastern edge of Washington Park are so daunting as to make the dream unrealizable, Hulsebos-Spofford and Faheem Majeed, joined by architect Andrew Schachman, have another plan.

Their smaller scale replica will be able to move around town, possibly on a flatbed truck, bringing exhibitions that explore the museum collection and the city's African-American history to the near south side, the west side, the north side, and all sides of town. And to end the tour, the museum would be lowered onto a barge in the Chicago River and floated to the site of DuSable Park at the mouth of the Chicago River. 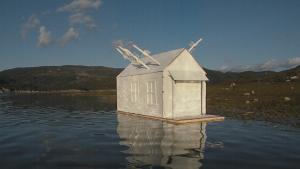 The park is currently unfinished, walled off because its soil is said to be contaminated with radioactive compounds. Hulsebos-Spofford and Majeed will spend the first three months of the new year at the Cultural Center, interacting with artists, designers and engineers, community leaders and the public about the Floating Museum's exhibitions. This is only the latest in floating works for Hulsebos-Spofford, who previously staged an immigrant invasion of a beach in Gary with rafts made by students who had explored the history of Chicago's undocumented students, as well as a floating shotgun shack called "Death floats by with hotpants" made of cardboard inspired by a section of Mark Twain's The Adventures of Huckleberry Finn.

Read an interview with Faheem Majeed. 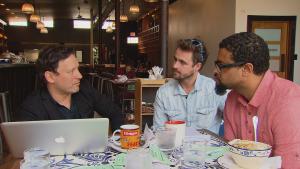 What are your hopes for the floating museum?

One of the things I find most exciting about the project is that it’s kind of a perfect storm. Jeremiah and I both graduated from UIC in 2009, and we’re both sculptors, and we have similar aesthetics in building things.

But while Jeremiah builds these giant things, my sculpture can be large or small. I like to say I build pretty pedestals – I create platforms for things I care about to be highlighted. So building an abstract model of the DuSable Museum falls in line with what I do, and then making something large and floating it down the river is what Jeremiah does.

And Andrew Schachman, who was the project lead for the build-out at the Hyde Park Arts Center, is a really good collaborator as well. Having him come on is really great because it gives us that grounding to architecture and history. He has this utilitarian aesthetic where walls and floors aren’t precious, space is to be used, and that falls in line with how we think about our sculpture – they do things physically and are intended to be used. So it really is like a perfect storm for us, a mashup of our interests and a lot of things we see in Chicago. 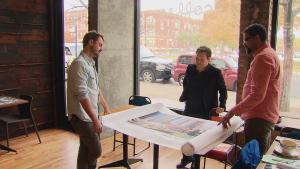 We’re starting on the footprint of the DuSable Museum, which is a predominantly black space founded out of a domestic space. The floating museum will be moving through the city and stopping in different neighborhoods, and we’ll be inviting community stakeholders and artists to engage, challenge, and give input. So the “floating” in this case is both literal and figurative – there’s figurative floating, like a thought bubble. But when it literally lands in the river and then moves up the river, it starts to transform from an institution and encompasses all these ideas about DuSable himself.

You know, DuSable was this Haitian immigrant who came into the city and started this trading post, which itself moved from an institution to a city.

It’ll land at DuSable Point and kind of be an amalgamation of this journey, but with the stickiness of a museum. It’ll be housed there for a little bit, and then it will go away, but at its core will be all these relationships, ideas, and things that will move into something else. It challenges how we perceive our institutions.

*Illinois Artists at Work is partially supported by a grant from the Illinois Arts Council Agency.