What's Up on Northerly Island? 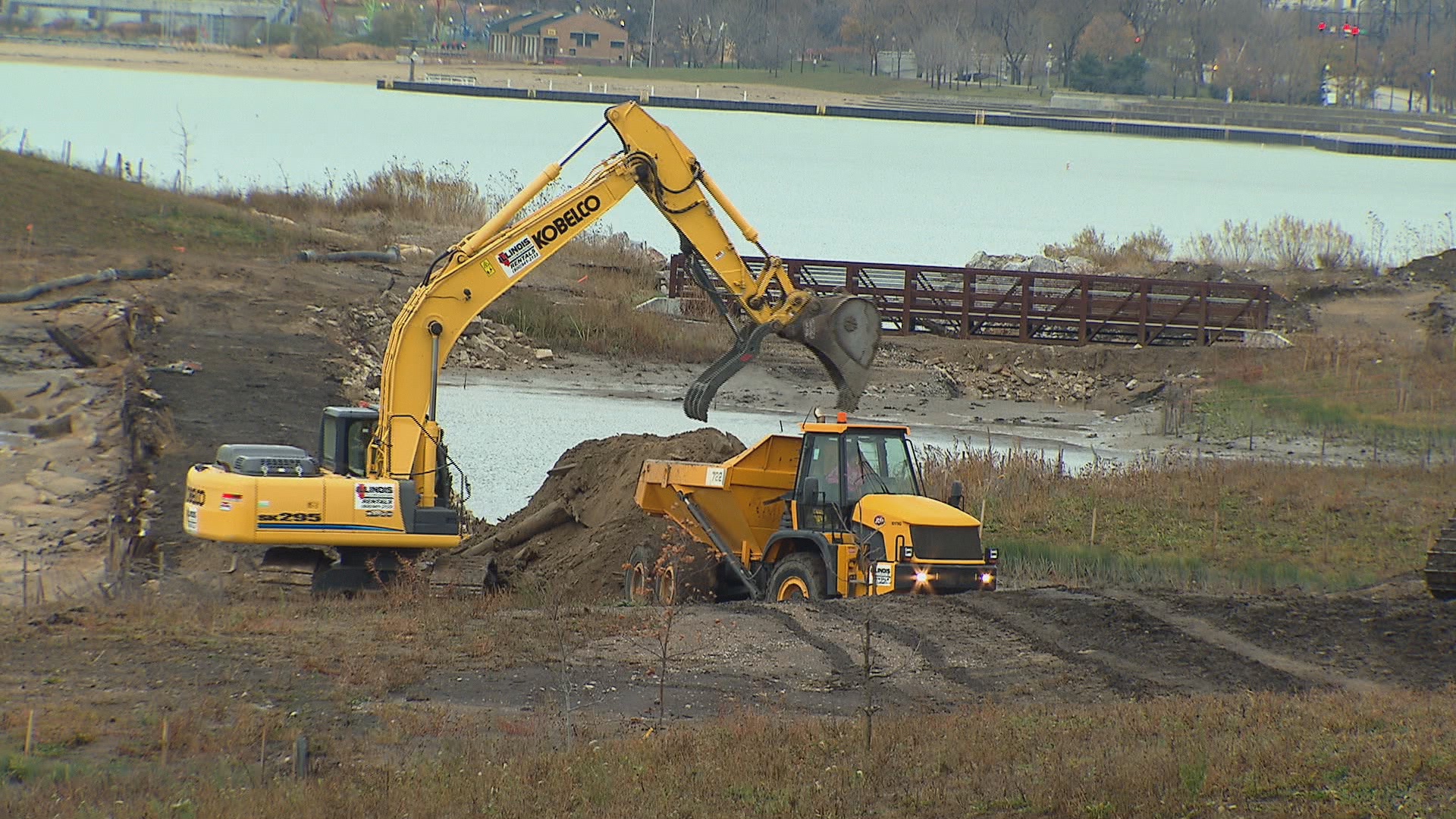 It hasn't exactly been the kind of weather that makes you want to visit a lakefront park lately. But spring will come and by then one of the city’s newest parks will be set to open. It's a new park, but an old location. Northerly Island has gone through many transformations since the original breakwater was put in in the 1920s.

The trucks and backhoes have been busy for the past year and a half on the 40-acre south end of Northerly Island. The city’s only park in the lake is beginning to take shape. 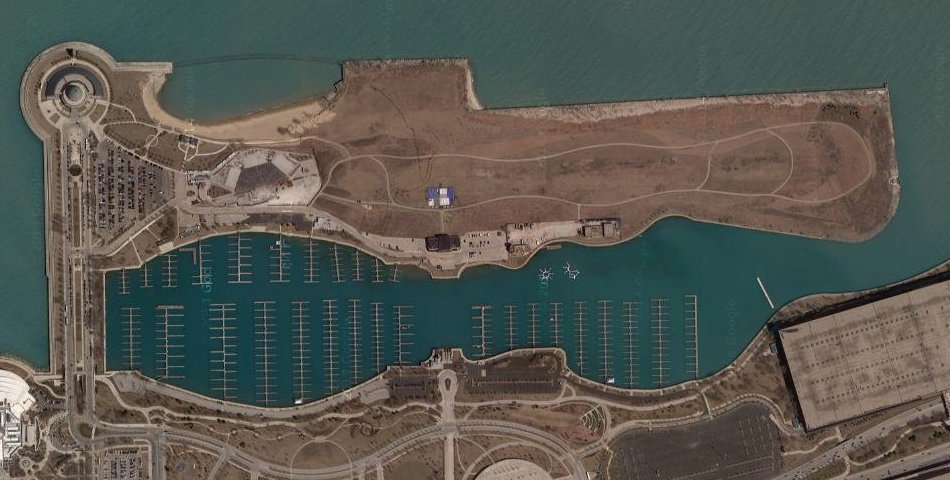 “When you get out here, and you see it in person-- the scale of it and the topography, and the natural environment that we're creating is really exciting,” said Rob Rejman of the Chicago Park District.

The planting began last spring. Although the space currently looks sparse, when completed, 15,000 trees and shrubs, and 300,000 plugs of native grasses and wildflowers will have been planted.

The Park District's plan envisions city kids immersed in nature, walking through the prairie, and camping out under the oak trees. There will also be plenty of opportunities to learn about the natural environment.

“What we’re hoping to do is work with this natural connection with The Field Museum, the Adler Planetarium [and] the Shedd Aquarium to get kids out here and learn all about it,” Rejman said.

The rolling hills were created with the dirt, rock, and sand that was excavated to build the pond.

Hover over the map to learn more about the ecology on Northerly Island. 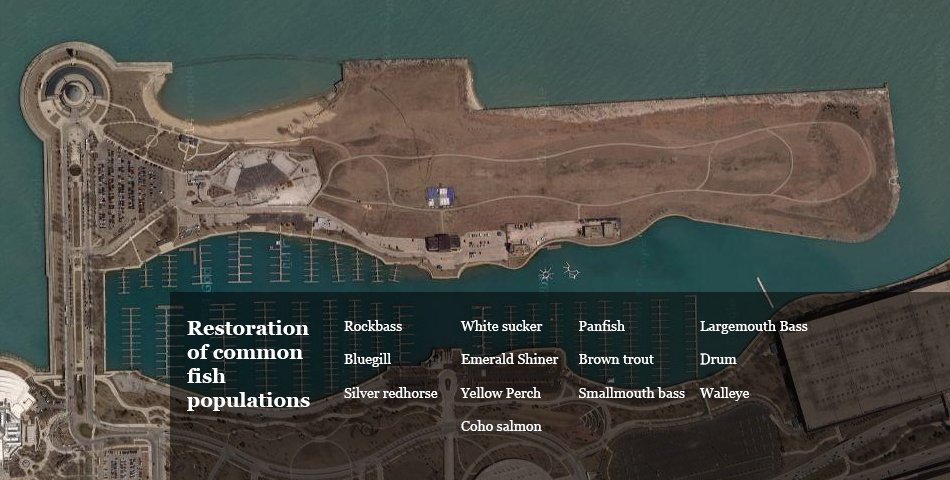 “This is about a 7-acre pond in the middle of Lake Michigan and people say, ‘Why do you have a pond in the middle of Lake Michigan?’” said Bob Foster of the Chicago Park District. “Habitat value--you can see ducks all around that normally would not be in the lake this time of year, but they have a protected area that's their natural environment. They can come in here, get something to eat--plants and little fish--then they can go on their way south migrating.”

Construction crews were surprised to hit a solid structure when they began digging out the pond. The original breakwater was built in 1923 in preparation for the World's Fair in 1933. The Park District considered removing the old breakwater, but that changed. 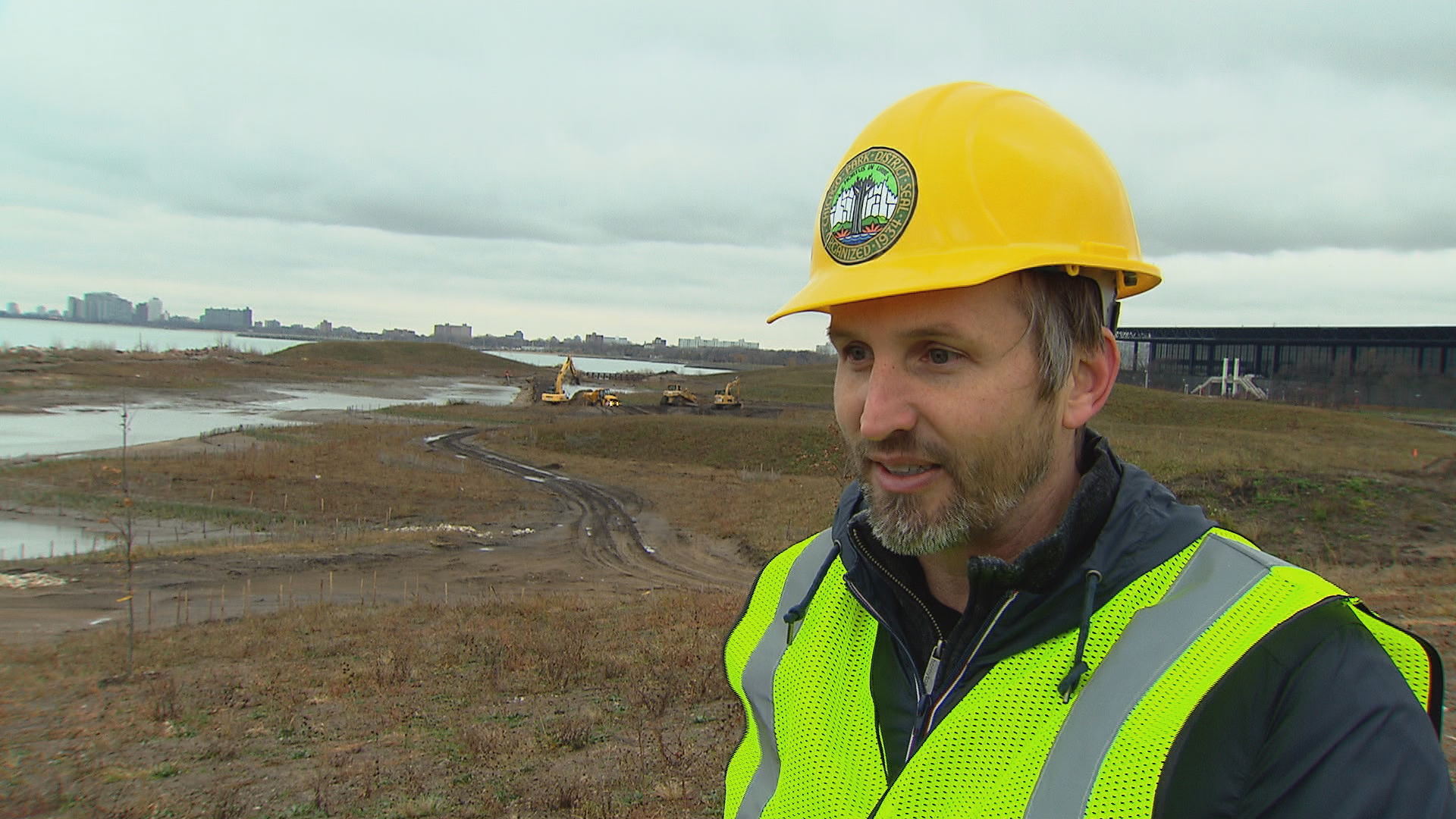 “What we want to do is keep that and let the history of the island sort of show through, since this is actually a manmade place, and accentuate that,” Rejman said. “So we’ll plant it, make it a nice place along the pond for birds to stop over, and just let that be part of the actual design.”

The breakwater followed the plans laid out by Daniel Burnham in 1909; World's Fair buildings filled the peninsula in 1933 and 1934. Then a bridge at the south end connected to the mainland.

In the 1940s, the land to the east of the breakwater was filled with sand and rubble from the lake bottom to create Meigs Field. Meigs operated until March 2003, when Mayor Richard M. Daley infamously called in the bulldozers to carve X's in the runway to make way for the park he coveted. The city paid more than $1 million in fines to the FAA, but Daley never backed off his decision. Today, Meigs’ supporters begrudgingly accept the new park, but still contend Daley's actions were illegal.

“It's a nice park, and it's a symbol of gross overreach on the part of the Mayor, and the problem is it happens over and over,” said Steve Whitney of Friends of Meigs Field. “It's not just Meigs Field. It’s Soldier Field, it's the Lucas Museum. The Mayor makes up his mind what he wants to do, and it’s all about the PR spin to get it to sound like that's what the public wants.”

The Park District contends that hundreds of hours of public input went into the plan for Northerly Island produced by JJR and Studio Gang architects. Construction began on the southern section with a $6 million grant from the Army Corps of Engineers, and with another $3 million coming from revenues from the concert venue. There is no funding yet for proposals to add a barrier reef enclosing a deep water lagoon off the east side of the park, or for a much larger permanent amphitheater, seating 14-16,000 fans on the north end of the park. 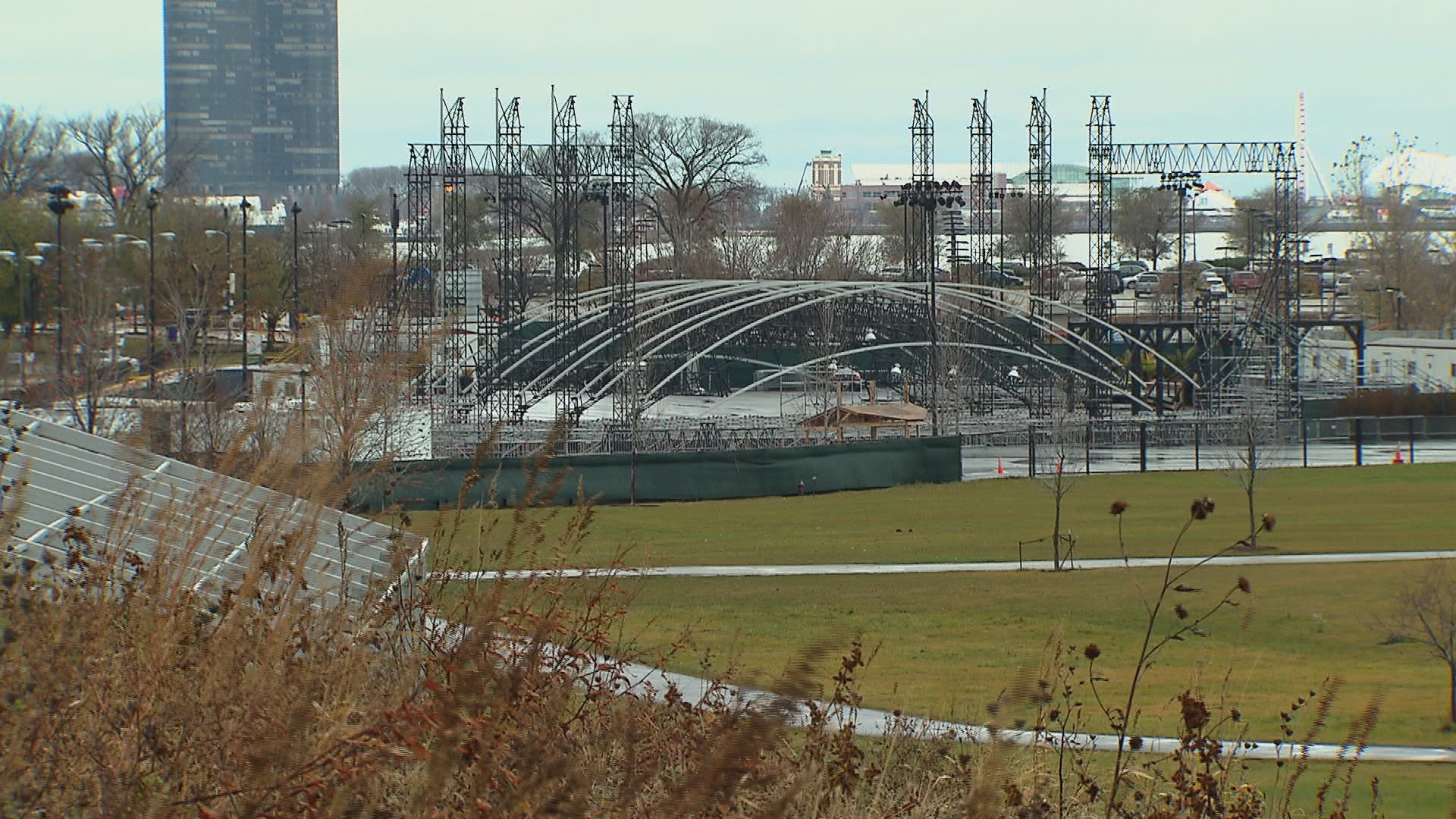 “It’s part of a wish list, like other parts of the framework plan,” Rejman said. “Right now, the current music venue is working wonderfully. It’s helping to fund all of the work that’s happening out here now.”

There is one part of the plan that worries Northerly Island's closest neighbors--the boaters in Burnham Harbor. The plan contains drawings for a pedestrian bridge right across the middle of the harbor. Now George Lucas has offered to pay for that bridge, which would connect his proposed museum to Northerly Island.

“It's something that we know, through the framework planning process, that circulation on Museum Campus into Northerly Island needs to be improved and we’d like to improve it,” Rejman said. “If a bridge becomes part of that, great. If we can make it work, great.”

But boaters don't see any way to make a pedestrian bridge work.

“It affects all the traffic trying to get in and out of the harbor,” said boat owner Bill Van Emburg. “It has the potential, depending on which plan they go for, to make the northern side of the harbor inaccessible for sailboats or any of the larger power boats. Even if they use a ferry, it's going to create a great deal of traffic and hassle. And for what? So they can maybe bring a few more people to Northerly IsIand than would already get there by just going in the ways they can get in now?”

Hover over the map to learn more about transportation options to Northerly Island. 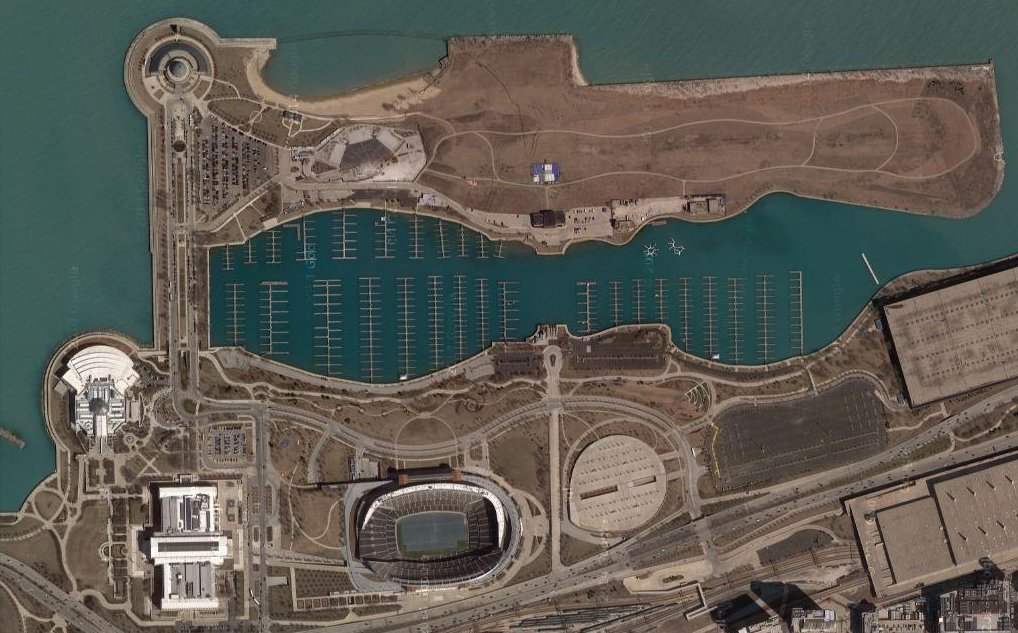 Boat owner Gregory Landis sees the plan as a threat to the harbor where he has kept boats for decades.

“We're scared to death that they're going to put this pedestrian bridge in, and their plan is to move all the boaters down to 31st Street since they built that marina that is so empty,” Landis said. 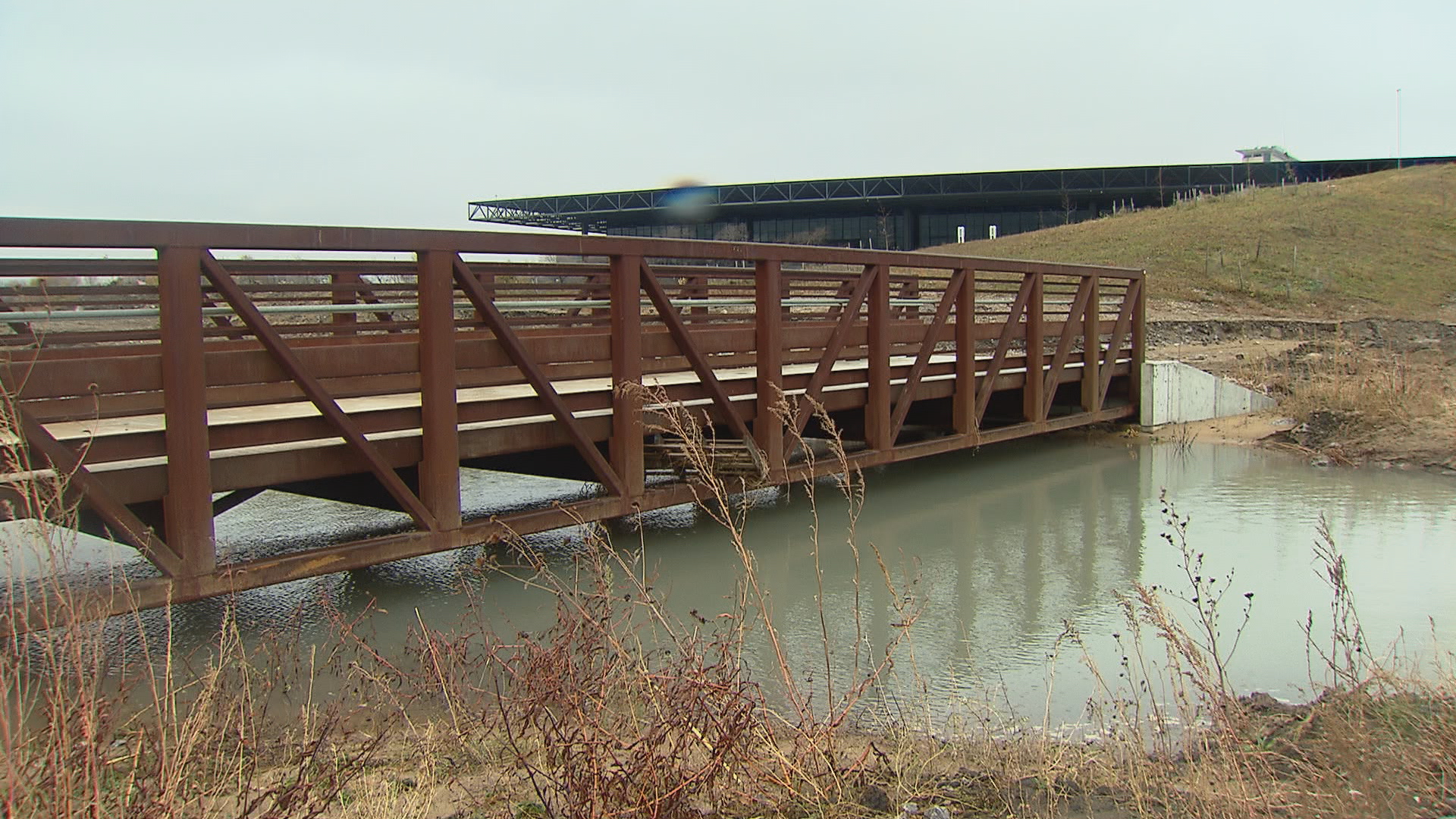 The walking trail around the southern end of the park should be open by next spring. But it will take another two years for the grasses and trees to mature enough to let people off the path to hike or camp. Even so, the Park District promises a unique urban wilderness experience for those who venture out to Northerly Island.

Relatively little controversy surrounds Northerly Island, unlike the low level controversy brewing over Maggie Daley Park, which is scheduled to open in December.