Barbara Mahany has gone from the front page of the Chicago Tribune to a page two column, and now she is taking her stories to the pages of a new book, Slowing Time: Seeing the Sacred Outside Your Kitchen Door. In this seasonal guide to wonder and wisdom, Mahany takes readers through the process of finding the divine in ordinary moments. She joins us to discuss her new book, and finding the sacred that's all around.

Read an excerpt from Mahany's book. 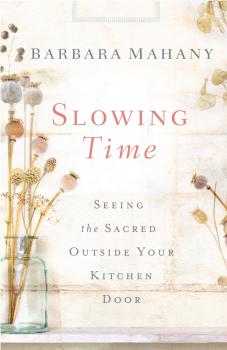 The lesson: how to regard. how to watch. How to take in the world.

Here’s how it unfolded: I bounded the stairs, breathless—and ten minutes late—to roust my little one from his sheets.

He rolled out of bed the way he usually does: somersault off the pillow to sprawled on his back at the end of the mattress, head dangling, flopping like some sort of upside-down rag doll, not too far from the ground. A perfect inverted perch, he decided, for keeping watch out the window.

That’s when he announced. “Papa is out on the roof. He’s hopping around. I think maybe he’s looking for breakfast.”

Papa is the red bird, papa cardinal, a character around here who goes by only one name.

After broadcasting every breath Papa was taking out there on the roof, just below the window through which he was watching, my little one reached for the ledge, grabbed the binoculars.

Suddenly, the boy hanging there with his curls topsy-turvy wanted to learn how to look through the little glass circles that, through the wizardry of optics alone, bring the world as close as the end of your nose.

As I tried—it’s clumsier than you might imagine—to line up the circles, tried to narrow then widen the hyphen between so it fit to his face, as he attempted to make it all clear, and not blurry, not too close, not too far, not staring down at the gutter, but trying to get that old bird in his lens, I realized, really, I was teaching the boy how to see.

How to regard. How to watch. How to take in the world without any words.

How to notice the pinhole there on the side of Papa’s small beak. How to study the feathers he fluffs when it’s cold. How to see the ballet of flurries and ice on the boughs as they shudder there in the deep winter’s wind.

He was, for a while, finding it hard. The bird was nowhere in sight. All he saw were the nail heads there on the shingles. Not quite the subject of choice for “Intro to Looking,” a beginner’s class in the fine art of things to do with your eyes.

Ah, but once he got Papa there in the crosshairs, he didn’t move. Didn’t flinch. Just froze like a boy with a bird in the palm of his hand. Which, almost, he was.

He might still be there now, only the clock nudged us on, the clock and the notion that school had a bell that soon would be ringing. 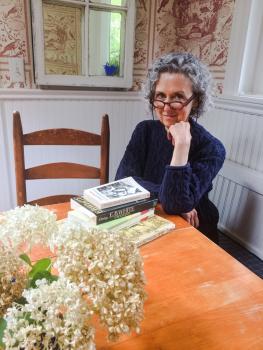 But, like clockwork, each morning since, he somersaults off  the end of the bed, grabs the looking lens from there on the ledge, and begins again to scan the sky, and the trees, and whoever de- cides to land on the roof.

He’s even tried it at night. Though it’s a little bit hard to make out a star with a mere binocular lens. I explained that’s where the telescope comes to the rescue, but that would be the next class in the series, and we’re only just fumbling with this.

I couldn’t be more tickled that he’s taking so deep a fancy to a sense that can take him so far, a sense that will bring more wis- dom and glory than he or I or any of us, really, can ever imagine.

To see is to know, is to understand, is to absorb.

To see is to take in—from the thinnest strand of a spider’s web laden with dew to the last dying ember of a star as it streaks through the cosmos—the whole of God’s breath.

And it is not every day that any one of us gets a chance to in- struct in using the eyes for all that they’re meant to take in: The way someone fidgets a spoon while making a point at the table. The color of sky as the last beams of the day paint a pink you’ll never forget. The glint of the moonlight on a pine branch heavy with snow. The gleam in the eye of someone you love.

And, oh, what of the things we can’t teach, the ones we only can pray they learn on their own: How not to miss the twinge of the hurt deep in the heart; the sparkle of love blooming; the look of intent, of paying attention; how to notice a soul draining toward empty.

Really, so much of it is only just seeing by feeling. It’s not un- like Braille, after all. So much of the seeing that matters. It comes through the gift of the eyes, but also the touch of the skin and the skip of the heart.

But, alas, in these mornings of teaching to see, I realize I am bound, I am tethered to only the lens bobbing there on the end of the cord that slips over his head.

I will teach them the glory of God is there through the lens. But they must open their hearts, as well as their eyes, to soak in the sights. To regard. To watch. To take in the world.

It is the often unnoticed to which I must teach them to pay the closest attention.

Excerpted with permission from Slowing Time: Seeing the Sacred Outside Your Kitchen Door by Barbara Mahany (Abingdon Press)