Thomas Eric Duncan, the Texas Ebola patient who traveled from Liberia to the United States, died from the disease. He had been in critical condition since he was diagnosed with the virus in mid-September.  Ebola continues to spread internationally as a nurse in Spain tests positive for the virus. To help combat the spread of the disease, federal officials announced temperature screenings of passengers arriving from West Africa would begin at five U.S. airports, including O’Hare.  We discuss the latest Ebola cases and precautions being put in place to stop the spread of the disease. 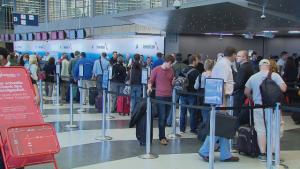 With the continuing international spread of Ebola, the CDC released a fact sheet detailing the exit and entry screenings that will be conducted at airports.

Exit screenings are conducted at airports in outbreak-affected countries, and while they may look different from country to country, they will contain the same basic elements.

The CDC has 20 quarantine stations located at the ports of entry where most international travelers enter the U.S. Enhanced entry screening of travelers who have been in Guinea, Liberia, and, Sierra Leona will be conducted at five U.S. airports.

For each arriving traveler who has been to an outbreak-affected country: 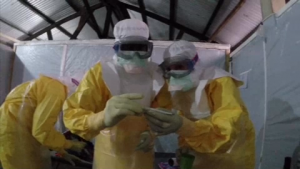 Ebola virus disease is a severe often fatal illness. Fruit bats are considered a possible natural host of the virus, and outbreaks usually occur in remote villages in Central and West Africa near tropical rainforests. The virus is transmitted through contact with the blood, tissues or body fluids of infected people or animals. In Africa, infection has been documented through the handling of infected chimpanzees, gorillas, fruit bats, monkeys, forest antelope and porcupines, according to the World Health Organization.

Symptoms: A sudden fever, muscle pain, weakness, headaches, and a sore throat are early symptoms. These are usually followed by vomiting, kidney and liver problems, diarrhea, rashes, and in some cases both internal and external bleeding. Lab findings include low white blood cell and platelet count and elevated liver enzymes. Incubation period is 2 to 21 days. Ebola virus infections can be diagnosed in a lab through several types of tests.

Treatment: Currently, there are no vaccines available for Ebola, although several are being tested and evaluated. Ebola outbreaks have a case fatality rate of up to 90 percent, and if an outbreak occurs, the infected person or animal should be quarantined to reduce the risk of spreading the disease. Ebola virus patients are usually very dehydrated and require intensive care.