Chicago as a Terminal Town

Read an excerpt, view a slideshow, and view a schedule of related events. 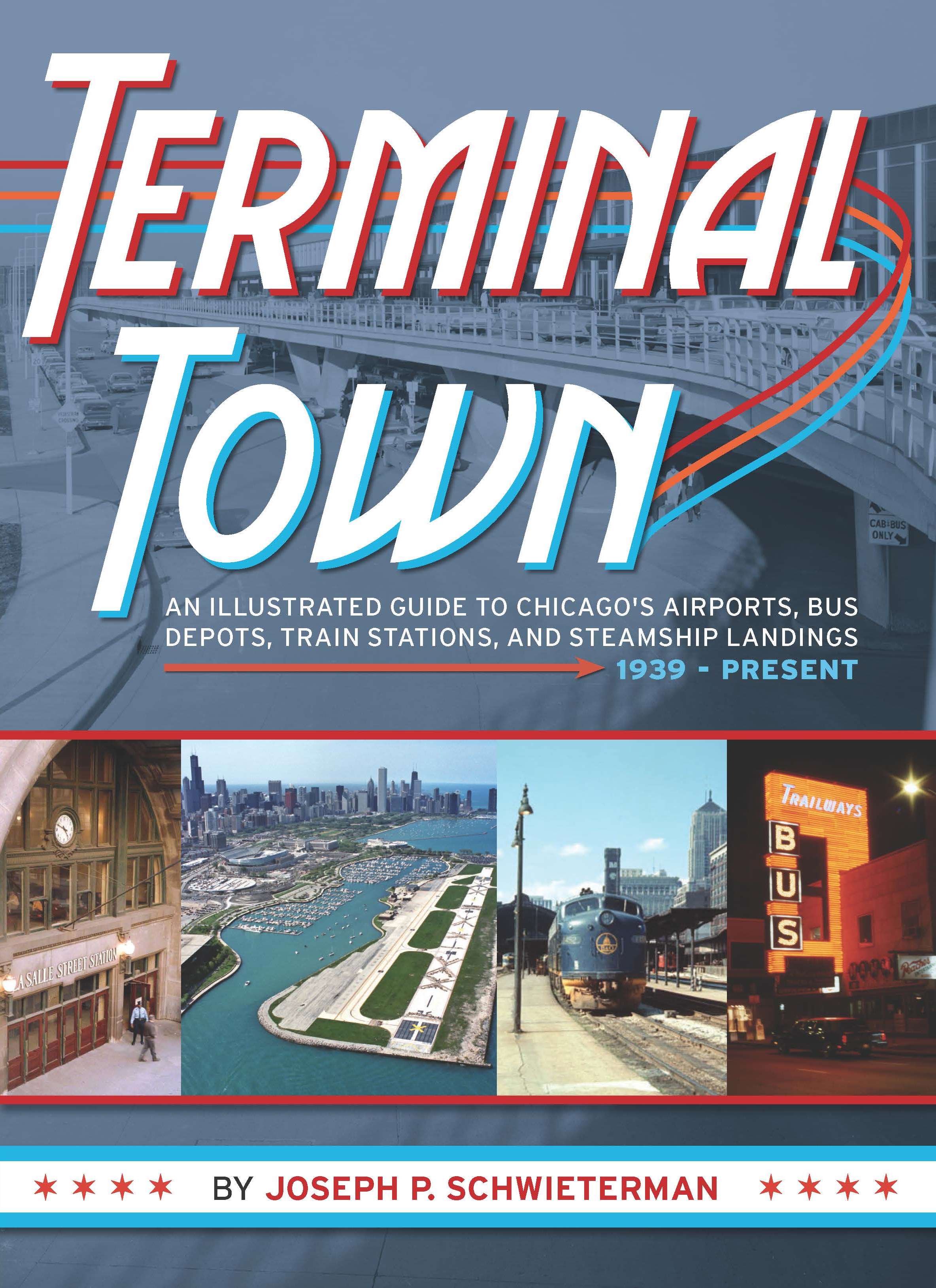 Chicago’s system of passenger transportation terminals, famously complex and constantly changing, has for more than a century been a defining feature of its cosmopolitan character. Whether serving those traveling by aircraft, boat, bus, or train, these places have given the “Windy City” its reputation as the epicenter of America’s passenger transportation network.

Yet the full extent of this system has gone unappreciated and misunderstood by many observers. Some of the most remarkable terminals are ignored in publications about the city’s history and largely unknown to contemporary travelers and transportation professionals. To provide readers a grasp of the system’s extraordinary proportions, this book highlights 48 places in the metropolitan region that have been termini or important connecting points for intercity passengers since 1939. The various chapters take readers to the nerve centers of a transportation system that shoulders an enormous burden: moving people across the continent.

Chicago deserves to be the focus of such a book, if for nothing else than its top ranking in key areas of passenger travel. From the beginning of the twentieth century through 1969, Chicago had six major downtown railroad stations—twice as many as any other large American city. Between the 1930s and 1998, Chicago was home to the world’s busiest airport (initially Midway Airport and later O’Hare International Airport). Passengers boarding in Chicago could—and can still—fly directly to more major American cities than from any other city in the country. From 1953 to 1989, Chicago was home to the nation’s largest independently operated bus depot—the Chicago Greyhound Station—a facility that offered direct bus service to more places than from any other American city.

Evaluating this ponderous system of terminals reveals both the flattering and less-than flattering sides of Chicago’s transportation heritage. For generations, travelers who simply want to go from Point A to Point B have looked at Chicago’s terminal system with both a sense of awe and a sense of dread. The city gives them innumerable travel alternatives while also requiring them to contend with some of the country’s most notorious bottlenecks. When the city’s population was near its peak in 1955, buses, trains, planes, and ships arriving in the metropolitan area terminated at a bewildering 20 different locations. Another five transfer points, some on the region’s periphery, offered opportunities for timesaving connections for those passing through the region.

Readers may immediately be drawn to the chapters featuring the great icons of American transportation—Chicago Union Station, Midway, and O’Hare, to name only a few. Smaller and less-publicized locations, however, also deserve attention. Englewood Union Station on the South Side once had direct service to more of America’s 100 largest cities than was available from any other train depot in the United States. Sky Harbor Airport in Northbrook, was home to the world’s first “scheduled air taxi shuttle.” Tiny Meigs Field on the Chicago waterfront boasted six carriers operating 122 daily passenger flights—the most ever at any downtown airport in the country.

Great Terminals of the Past and Present: Author Presentation
On Wednesday, Sept. 17, from noon to 1:00 pm, join author Joseph P. Schwieterman as he discusses the great terminals of today and yesteryear. Along with sharing insights on the matter, Schwieterman will also be available to sign copies of his book. Free to attend.

Legacy of the “Big Six” Railroad Terminals: Walking Tour
On Friday, Sept. 26, from 2:00 to 5:00 pm, explore the legacy of downtown railroad terminals on a tour including speakers discussing future plans. Space is limited to 20 attendees. Cost is $20.

Midway 35th ReBirthday Party: Symposium
On Thursday, Oct. 30, from 5:30 to 7:30 pm, the "ReBirthday party" will feature Howard Putnam, former Braniff and Southwest Airlines CEO. “Pilot historians” who have helped to document the airport’s significant past, will also be in attendance. Free to attend.

Commemoration at Midway Airport: On site Celebration
On Saturday, Nov. 1, at noon, join the commemoration of 35 years since Midway’s eventful “second life” began under deregulation. Many of the major players in Midway's "renaissance" will be featured. Free to attend.

The Redevelopment of Randolph Street: Walking Tour
On Thursday, Nov. 6, from 10:00 am to 12:30 pm, a walking tour will explore Randolph Street’s transformation from its beginnings as  “Chicago’s Time Square.” Cost is $10.

Silver Anniversary of Closing of the Chicago Greyhound Station
On Thursday, Dec. 4, at noon, take a look back at the World’s Largest Independently Operated Bus Depot. A cake cutting and optional walk will begin at 1:15 pm. Free to attend.