Friday nights on many Chicago streets are primetime for violence, especially during the summer. But in Little Village, multiple organizations have collaborated to prevent that. Enlace Chicago and Beyond the Ball are two of those organizations that organize weekly basketball games in the middle of neighborhood blocks, that were once violent, to keep the criminal element at bay, while providing a positive activity for neighborhood kids. Brandis Friedman has the story on how the program works. 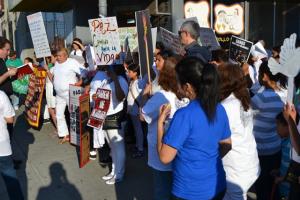 “My son was killed one and a half years ago. Silence is the worst violence in the community,” Doris Hernandez said, as she marched through the neighborhood where her son was shot.

Hernandez was not alone. She was joined by a large group of families looking to end violence in the Little Village neighborhood. Starting at St. Agnes Church, the march moved through the streets, making stops along the way where victims had been killed.

“Everybody on each side is affected, whether the victim or the culprit; everybody is hurting and struggling through these situations,” said Yvette Castaneda, who was shot in Little Village when she was 15 years old.

A community group called Enlace Chicago works to stop the violence and keep children off the streets through intervention. The center provides mentors to children and a safe place to play. Enlace Chicago also works with youth who have been involved in gangs or arrested.

“In essence, we’re choking off that pipeline of kids who might become disconnected, involved in the streets, or in contact with law enforcement,” said Kathryn Bocanegra, Enlace’s Violence Prevention Director. “The community is working better together.” 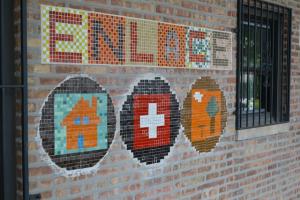 Enlace has teamed up with other organizations to sponsor community events and promote peace. So far, groups have removed gang graffiti on buildings and replaced it with murals. They’ve also worked to turn streets that were once considered dangerous into family safe zones where children can play basketball or soccer.

“We see the more kids play, the more resilient they’re becoming, and the more they’re adjusting to their situations, and they’re doing better in school,” said Rob Castaneda, co-founder of Beyond the Ball.

The organizations say a sense of community is important in the efforts to end violence. Group leaders say violence tends to create fear and keep people inside, disconnecting them from their neighbors. Bringing them together creates a safer environment. 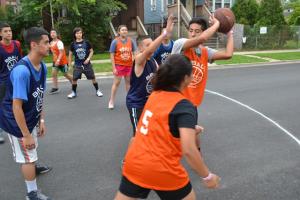 “You’ll see residents who never knew each other coming out and sitting on their porches, and having porch parties. And those relationships sustain afterwards…the next time they hear a window breaking in their neighbor’s house, they’re more willing to make the call,” said Keri Blackwell, deputy director of Local Initiatives Support Corporation Chicago.

Organizers say they’re seeing the difference in Little Village because of the community efforts and the parents and family members who make their voices heard.

“The community is going to respect the voice of a mother or father who lost their child above everything else,” Bocanegra said.