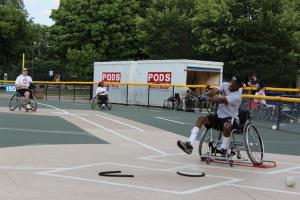 Not all gunshot victims die.

And not all that survive are able to walk.

“I hadn’t even been shot for three days before the doctor told me I may not walk again,” said Wilkins, who uses a wheelchair. “I was devastated and went into depression.”

Before the shooting, Wilkins was heavily involved in the streets.  Even though he had a job, he sold drugs and partied, smoked, and drank frequently.

Wilkins believes that today’s youth are attracted to the glamour and limelight provided by the street lifestyle.  He adds that the streets are just as addictive as the drugs he  used to sell.

Wilkins believes his addiction to the streets and a fast lifestyle is the reason he got shot, and it’s the same reason he never asks, “Why me?”

“Before it [the shooting] happened, I felt like something was about to happen to me,” said Wilkins. “It was like a premonition.”

“I was too deep, and I wanted out. I was just tired of it, but I didn’t have enough strength to walk out of that life myself, so that was God’s way of helping me.”

Now Wilkins is trying to help other gunshot victims. 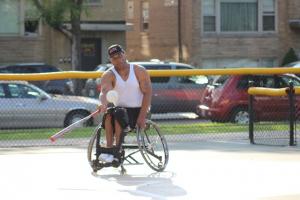 Wilkins has traveled the country playing wheelchair sports. He noticed that many of the black and Hispanic athletes who use wheelchairs are gunshot victims, while the majority of their white counterparts use wheelchairs because they were veterans or involved in an accident. Dissatisfied with the support he and other paraplegics who were victims of gun violence receive, Wilkins founded Broken Winggz. The organization helps those who are paralyzed by gun violence and their families cope with and adjust to this new lifestyle.

“I just try to be there and be an ear,” he said. “When I was going through it, that’s what I needed. There really wasn’t anyone there to say, ‘Hey, you’re going to be OK,‘ or show me that I could make it.”

“We try and comfort the family as well, because this gets frustrating,” Wilkins added. “When a person gets shot, they’re not the only one getting shot. Everybody that’s around them gets shot too because everyone is affected by it.”

Wilkins also tries to be the mediator in altercations he encounters, and he encourages a non-retaliatory mindset.  The urge to not retaliate has to come from within, and people need to see the bright side of life, he said.

“Life is precious,” he said. “We really don’t know the value of life because we see this [violence] happening so much in our community, and you become frustrated that you want revenge. But all it does is put somebody else in the same predicament that you’re in, and that’s not accomplishing anything.”

The shooters never really see the aftermath of the shooting, Wilkins said, adding in order for them to change their ways, they need to be challenged. That’s why he hopes to one day open a Broken Winggz facility, where those shooters can see how their actions impact others as well as do community service. The facility would also serve as a place for the victims to receive the assistance they need.

“This is an epidemic, and we have to do something to stop it,” he said.