On July 19, 1989, one of the most horrific plane crashes occurred. As passengers of United Airlines Flight 232 were watching a film, a loud explosion interrupted the silence. They had lost an engine, but with two remaining, continued toward Chicago. Almost 44 minutes later, the plane crashed onto a runway in Sioux City, Iowa, bursting into flames. In his new book, "Flight 232: A Story of Disaster and Survival," Laurence Gonzales tells the story of the horrific plane crash with interviews from air traffic controllers to the pilots themselves.

Read an excerpt from Chapter One. 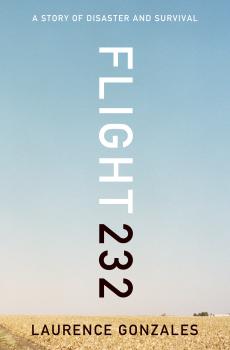 Flight 232: A Story of Disaster and Survival

Martha Conant traveled regularly for her job with Hewlett-Packard in Denver. On that Wednesday, she was on her way to Philadelphia to work with a client. She didn’t even look at her ticket until she was at the airport. She had been assigned a seat in the last row. She checked the display boards and saw that she could wait a couple of hours for a nonstop flight instead of this one, which was making a stop in Chicago. After thinking it over, she decided that she could get some work done on the plane. She kept her reservation for United Flight 232. The date was July 19, 1989.

Conant took the second seat in from the port aisle in the center section at the back of the plane. She wore a black skirt and a pink sweater. She carried a briefcase and a purse. Conant anticipated people milling around the bathrooms behind her as flight attendants bustled about with their carts in the galley. She resigned herself to a few unpleasant hours and decided to lose herself in her work. Martha Conant opened her briefcase.

She didn’t pay much attention to the preparations for departure and the takeoff: a routine flight among many routine flights. She glanced up once or twice at the in-flight movie, a documentary about the Kentucky Derby or the Triple Crown—something about horseracing narrated by a sportscaster named Jim McKay. The in-flight meal was a “picnic” lunch, as United Airlines called it that summer: a plastic basket with a red-and-white-checked napkin in which were nestled greasy chicken fingers, a package of Oreo cookies, and a paper cup with a few cherries in it. Conant had just eaten one of the chicken fingers when an explosion shook her from her reverie. Her first thought was that a bomb had gone off, and her heart went into her throat. Susan White, the young flight attendant in the port aisle, went to her knees with an armload of drinks as the plane slewed to the right. Conant felt the tail drop out from under her as the plane began climbing.