We sit down with Jason Blumberg, the CEO of the Energy Foundry, a venture capital fund established as part of the $3.2 billion smart grid law that aims to invest in technology companies that will transform the energy landscape.

Read an interview with Samir Mayekar, Co-Founder and CEO of SiNode Systems, one of the companies Energy Foundry invests in. 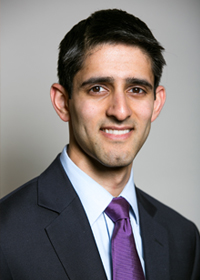 Tell us about your technology.

Our company makes advanced energy materials. We make new materials that go inside of batteries to that make them charge quicker and last longer. We work to replace graphite currently in batteries with a composite of silicon and grapheme. This improves battery performance to store more energy and charge longer.

Why the energy technology industry?

We started through Northwestern University’s NUvention. The program combined graduate engineer students with graduate business students. Through it, we were allowed to develop a product in sustainable energy. Developing new materials was key for us to improve battery performance. So what started as a class has now become a company. And what’s great about it is all of our founders are graduates from Northwestern University. Since we’re in Illinois Institute of Technology’s Technology Park, we’ve hired graduates from IIT.

What’s your path to commercialization?

Our goal is to focus on building partnerships with chemical companies so we can manufacture more. Our goal is also to partner with battery companies for more application of our technology. Right now, we’re focusing on certain consumer applications like wearable electronics, some military applications, and we hope to push into use for smartphones. Many years from now, we hope our technology can be used for vehicles.

What do you think about the energy tech startup scene in Chicago?

We’re a proud member of it. In 2013, we won two major awards. We won the Rice Business Plan Competition and the Department of Energy’s National Clean Energy Business Plan Competition. Rice competition was the biggest. It’s known as the richest in the world. When we won that one, we were awarded $1 million. And the competition isn’t just for energy. We were the second winner from Chicago (and out of Northwestern) to win it. So we beat out Harvard, Stanford, you name it. It really beats the stigma that innovation only comes from the coasts.

Have you thought about moving to “the coasts” (ie. Silicon Valley)?

Many people tried to convince us to, but we love Chicago. Why should we when we’re next to [Northwestern] University and Argonne Labs? We see this as a major opportunity for the Midwest to be an energy technology hub. While we don’t have the same environment as Silicon Valley, for our space, there’s a lot of potential here. The Midwest knows how to manufacture which is one of the reasons why we love being in the Midwest.