We talk with Rebecca Eaton, the executive producer of Masterpiece and get the inside scoop on America’s beloved British dramas. We also check to see what’s to come next season on Downton Abbey. Read an excerpt from Eaton's book, Making Masterpiece: 25 Years Behind the Scenes at Masterpiece Theatre and Mystery! on PBS: 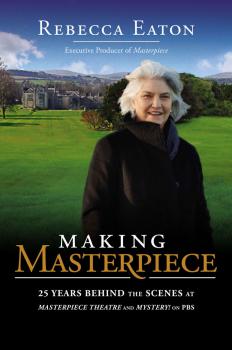 Masterpiece Classic was scheduled to air in January, so we concentrated on finding its host first. We wasted several months waiting for Kate Winslet to say no and for James McAvoy to say yes and then no. Sigourney Weaver’s agent wanted her to do it, but James Cameron wanted her to do Avatar more. The list was pretty long.

When I called Hollywood agents, or more accurately their assistants, they would invariably say, “I don’t have X at the moment—can he return?” meaning, “I don’t know who you are, and he’ll probably never call you back.”

If I ever did get through to an actual agent, he or she seemed only to hear that I was with PBS, and since PBS equals no money, the conversation would go politely nowhere. Even the lovely Ken Branagh, through his manager, answered with a perplexed, “Didn’t you ask me this once before, and didn’t I say no?”

The fastest rejection I got was from George Clooney’s agent, after I’d spent two days carefully crafting an e-mail offer. Literally five minutes after my finger came off the “send” button, I got a return e-mail saying no.

Then we had a collective brainstorm and remembered Gillian Anderson’s deep appreciation for Masterpiece Theatre. We’d met when she came to L.A. to help us publicize Bleak House, a BBC co-production written by, of course, Andrew Davies, in which she gives a perfect performance as the beautiful, haunted Lady Dedlock. After years of mixing it up with journalists during her X-Files days, she didn’t particularly like doing press interviews; but she traveled from London, where she now lives, to L.A., to help us out.

She’d looked right at me and said, “I love Masterpiece Theatre. Let me know if there’s ever any way I can help.”

She’s a woman of her word.

Gillian explains: “When I was called about the rebranding campaign, I understood it as a way to build audience and to bridge certain demographics. I said yes right away. My only concern was that a few people said to me, ‘Congratulations on your new job.’ I was a little worried that they would think that somehow I’d chosen to do this instead of acting per se. But that didn’t last very long.

“I appreciated what Rebecca and her crew were doing and wanted to be a part of it. A lot of it was realizing how important Masterpiece is to what gets created in the U.K.—and knowing how much PBS relies on the audience for the funding to make it happen. I wanted to help keep these shows coming and to be vocal about them, to encourage other people to acknowledge their appreciation, too, by being generous.”

At this point we were seriously behind schedule. Even after Gillian agreed to do it, negotiations went on and on. Her schedule was tricky because she was just coming back from Sri Lanka, where she has a house. It was literally early December before we arrived at a mutually agreeable shooting date in London. The newly minted Masterpiece Classic was to go on the air in January.

Senior producer Susanne Simpson and I had to jump-start the shoot in a freezing-cold warehouse in London. Despite the time we’d spent on music and imagery, we hadn’t been able to focus on the set: should it be an abstract background, or should we construct some- thing like what we’d done for Russell Baker, an interesting-looking office, filled with books?

Susanne remembers, “Because we weren’t sure how we wanted it to look, we actually had our producer in London bring in all kinds of props: tables and couches and vases and chandeliers. We tried each of the props: should we go with something simple and abstract, or re-create the whole Alistair Cooke look? There was the constant tension of wanting something new and fresh while at the same time not disappointing the loyal fans of Masterpiece.

“It even came down to the clothes Gillian would wear. Did we want her to have an Edwardian look, or a simple modern one?”

We were clear about one thing: after the years of homey, cluttered, eccentric sets for Masterpiece Theatre and Mystery!, we should go for utter simplicity and elegant lighting. We should focus only on the personality and the words of each host. We should go with a different palette for each genre: white for Contemporary, grey for Mystery!, and red for Classic.

But red for Classic presented a problem: Gillian arrived on the set with bright red hair. We’d been picturing diminutive, beautiful Gillian Anderson with her own blond hair. She apologized: she’d just been in Los Angeles for screen tests for the new X-Files movie, and they’d dyed her hair exactly the same color as the background of our new opening backdrop. She sort of disappeared into it.

Back in Boston, it was immediately clear that while its components seemed simple to construct, the new three-genre idea for Masterpiece put a real strain on our small staff back in Boston. There were only seven of us. The staff had come on board a conventional public television show to do conventional publicity, marketing, and outreach—organize print reviews, set up press junkets and live interviews, sell a few DVDs, raise some money. Now suddenly they had multimedia responsibilities in media that hadn’t existed five years before.

Bob Knapp [Masterpiece branding consultant] adds: “I had to remind them that we were selling a product here. After all, their viability with PBS had been questioned.” It became very clear that everything we did had to focus on tune-in—more eyeballs watching the show.