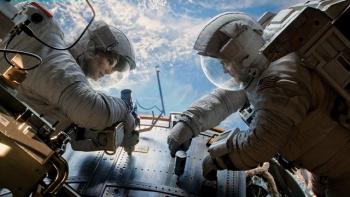 The movie Gravity, starring George Clooney and Sandra Bullock, has become a runaway box office hit and critical success. And while it’s been hailed for its groundbreaking technical accomplishments, how realistic is it? We hear from some Adler Planetarium astronomers about what they thought of the scientific aspects of the film.

Environmental problems are not just an issue here on earth. In space, thousands of pieces of debris, or “space junk,” orbit the Earth, presenting a threat to both astronauts and satellites in orbit. Produced by Melrae Pictures and distributed by K2 Communications, Space Junk 3D is a film currently playing at the Adler Planetarium that takes a closer look at the issue. Narrated by Academy Award nominee Tom Wilkinson, the 15-minute film “tells the story of how we have reached the tipping point in Earth’s Low Earth Orbit.” We talked with Larry Ciupik, senior astronomer at the Adler Planetarium, about the film.

What is this film about?

It’s a view of how much material we have orbiting earth right now, and to a certain extent, it’s a warning that we can’t put a lot more satellites up without dealing with the ones we already have up there. It’s amazing how much is out there. There are thousands of pieces of debris, plus satellites.

How would you define this debris?

It’s all material that’s manmade. These are not things that come from the Solar System. There’s nothing in orbit around earth, except the moon, that’s not manmade.

It mostly comes from all sorts of monitoring equipment for weather, for military use, and for satellite transmissions for television and radio. I would say it’s everything but the functioning satellites. Satellites that were put up 10 to 20 years ago are still out there, and those are now debris. Right now, about 30 countries have satellites in orbit.

Was any of the debris lost by astronauts?

There are a few things astronauts have lost in space, including a spatula, a tool bag, a glove, and a camera. They haven’t lost a lot though, because we haven’t had too many astronauts up there.

Why is this something people should be worried about?

If one piece of material that is moving at many thousands of miles an hour hits a satellite, it could cause havoc to the satellite. A collision like that could cause hundreds of millions of dollars worth of damage.

Basically, we always have the need for new satellites, and right now, there is a danger of not having enough space to do that because the orbits are getting filled with too much other material. Just like an airfield landing, you want to have enough space up there so you don’t have to worry about collisions.

What damage has the debris caused so far?

The International Space Station was hit, and satellites have been hit as well.

How long has this been a threat?

About 10 years. Just like in the old days with pollution, people thought it would never be a problem, but now we are starting to worry about it. This is another place that we polluted. 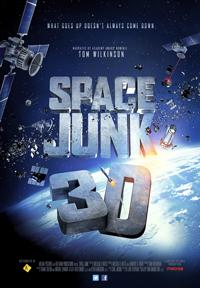 What preventative measures does the film talk about?

It talks about taking things down if you’re putting things up. It may actually be a job of some company down the road to go up and start harvesting garbage.

How is a satellite taken down?

It’s not that difficult. If a satellite is near the end of its life, you can give it a little kick and it will go down into the atmosphere, and then it will start burning up.

What kind of a journey does this 3D film provide?

This is not really a journey. It’s not like you’re in a spaceship. Instead, it’s a journey through information. There are visuals where you’re able to see, to some degree, how much material is up there. It’s a visually exciting medium because you see the number of satellites that are orbiting and you see a collision. We have never photographed a collision, but it’s recreated. I think it’s exciting, and it’s not scary. Children can certainly see it.