150 years ago, the Civil War was still raging. On the battlefront, the Confederates had just won the Battle of Chickamauga in Georgia. President Abraham Lincoln was a month away from delivering the Gettysburg Address. But what was happening on the home front? A new exhibit at The Newberry Library in conjunction with the Terra Foundation for American Art brings together art, literature, music and more to paint a portrait of what life was like in the North. Read the Artbeat blog about the exhibit, Home Front: Daily Life in the Civil War North.

A book of the same title is a companion volume to the collaborative exhibition. Read an excerpt from Chapter 1 below.

The Home at War, the War at Home
The Visual Culture of the Northern Home Front 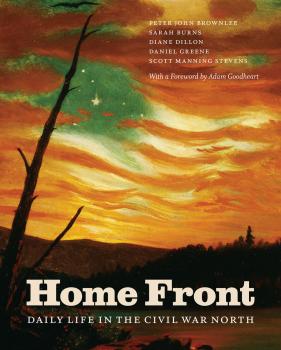 Not long after the end of the Civil War, game manufacturer Milton Bradley issued the Myriopticon, a miniature toy panorama that unrolled the history of the “Rebellion” in some twenty-two colorful pictures copied from illustrations that had appeared in Harper’s Weekly magazine during wartime. The design of the footsquare cardboard box mimicked a proscenium stage draped in patriotic bunting. It came with play tickets, a mock advertising poster, and a script for the narrator, to be read aloud as he or she turned the cranks that scrolled from scene to scene. The instruction booklet recommended that the show take place in a darkened room with a candle to provide dramatic backlighting for the scenes as they glided by.

One young enthusiast wrote to tell Bradley that neighbors flocked to his house to enjoy multiple repeat performances of the show. The child wanted Bradley to sell more of the devices, so “as to make it less crowded in our parlor.” So vividly authentic were the tableaux that an older brother who had been in the war “says it is just as your game represents it to be.” The Myriopticon embodied the very theater of war itself, scaled down to a manageable size, commodified, and packaged as parlor entertainment. It stood witness to the ways in which the far-off conflict had infiltrated and changed daily life—even after it was over. It is diffult to imagine a more evocative representation of the war at home.1

Designed to replay the war over and over again, the Myriopticon enshrined and preserved its remembrance, which has lived on to this day. One hundred and fifty years after it began, the Civil War still occupies a prominent place in the national collective memory. Our cultural productions tend first to portray the war as a battle over the future of slavery, or to focus on Lincoln’s determination to save the Union, or on brother fighting against brother. Battles and battlefields occupy us as well. Bull Run, Antietam, and Gettysburg all conjure up images of desolate landscapes strewn with war dead. Both North and South experienced unprecedented suffring. Forces for both sides described the war as a “harvest of death.” Yet many depictions have neglected the war’s influence on home fronts across the divided nation. Battlefields were not the only landscapes altered by the war. Soldiers were not the only ones who su≠ered. Countless individuals, whether near to the battle lines or far from them, saw their daily lives altered by the war.

While scholars in American history and literature have studied many different aspects of the Northern home front, art historians and museum curators have, with few exceptions, focused largely on the theater of war itself, as represented in media ranging from painting to photography and mass-circulated wood engravings in popular magazines.2 Thus, powerful images such as Timothy O’Sullivan’s Harvest of Death—a raw, grisly, and shocking photograph of corpses strewn about the Gettysburg battlefield—have become canonical and authoritative, as have paintings such as Winslow Homer’s 1866 Prisoners from the Front, a now classic representation of Union triumph and Confederate defeat.

The fact that such images have acquired iconic status speaks to a nagging problem that has provoked debate since the 1860s. Writing in the latter days of the war, New York critic Clarence Cook puzzled over the fact that the war had exerted such a “very remote and trifling influence” on American art. Only a widely scattered few had pictured aspects of the conflict, but the “chief body” of American artists had “gone on painting landscapes and genre pieces and portraits as if the old peace had never been interrupted.” Cook had no ready answer to this conundrum. In our own era, art historians have attributed that seeming escapism or elision to a “crisis” that boiled over when mechanized modern warfare starkly defied the capacity of traditional history painting to represent it: high ideals, theatrical posing, and noble self-sacrifice no longer seemed to fit the picture. While many artists whom Cook failed to credit did paint the leaders and battles of the war, only the pitiless stare of the photograph or Winslow Homer’s deadpan gaze seemed capable of confronting the antiheroic realities of a brutal conflict with what now strike us as truly modern eyes.3

By contrast, Home Front: Daily Life in the Civil War North reveals another side of the war. This volume, companion to the exhibition mounted jointly by the Newberry Library and the Terra Foundation for American Art, is the first to comprehensively examine the visual culture of Civil War–era home fronts in the North. It asks whether those artists on the home front—those who, as Cook saw it, simply went on as before—sought only to avoid the awful truth by burying their heads in the sand of landscapes far removed from battle, or if they yearned only to take nostalgic refuge in scenes of ordinary American life that seemed to escape war’s disruption. Avoidance of the war may have been the mode of some. But the war left its mark on many others, whose consciousness of the prolonged crisis impelled them to rethink and reshape conventional pictorial categories in ways that subtly or not-so-subtly referenced the war’s haunting presence on home fronts rural and urban, far-flung and close by, domestic and institutional. Just as the war intertwined with political and economic networks, it did so with those of fine art and visual culture more generally of the Northern home front. Thus, paintings and other depictions that at first glance appear to have little or nothing to do with the war reveal on further inspection telltale traces of its shadow. Others allude to it outright but in the process betray tensions and ambiguities that hint at the war’s heavy social and historical toll.

The essays collected here closely examine the mid-nineteenth-century American paintings that form the core of the exhibition. However, we also go much further, embedding these works in a dynamic visual context that illuminates, amplifies, and complicates their meanings and connotations. Frederic Church’s 1861 painting Our Banner in the Sky, for example, is an allegorical landscape in which a smoldering red sunrise morphs into a dramatic vision of the American flag, waving in tatters over a dark and desolate wilderness. The trunk of a leafless tree serves as flagstaff; directly above it, an eagle soars. Spurred by the Confederate bombardment of Fort Sumter in April 1861 that had torn the Union flag to shreds, Church painted Our Banner in the Sky to stir patriotic fervor at the moment of national rupture, the dawn of war. Scholars have singled out this work as a classic illustration of the ways in which Hudson River school painters used nature as vehicle to communicate political, national, social, and religious messages in symbolic terms. Not surprisingly, Church’s work also has figured in discussions of American painters’ attempts to address the crisis of the war in oblique and emblematic language.4 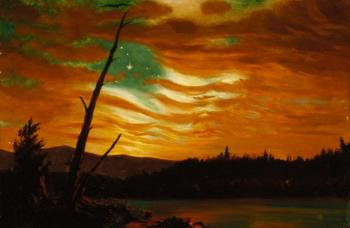 One critically important visual matrix for Our Banner in the Sky has largely escaped attention, however. The New York branch of the publishing firm Goupil & Co. bought the copyright and produced a lithograph after Church’s painting. Although few copies now survive, Goupil’s recorded profit of $1,500 as of August 18, 1861—just four months after combat began—suggests that the print was extremely popular. Church’s visionary imagery did not stand alone: viewers would have perceived it as a single coordinate in a visual landscape then so thoroughly blanketed by the patriotic image of the flag that it amounted to an epidemic of “flag mania.”5 Indeed, Goupil’s rival, Sarony, Major, and Knapp, quickly issued Our Heaven-Born Banner after a painting by one William Bauly, who flagrantly parroted Church’s flag and sky imagery, only replacing the bare tree with a Zouave sentry standing at attention with bayoneted rifle aloft; under the colors of the blazing firmament lies the stricken fort. Appended beneath the print were the first lines of Joseph Rodman Drake’s “The American Flag,” which declaimed the identical vision in stirring lines of verse:

When Freedom from her mountain height
Unfurled her standard to the air,
She tore the azure robe of night
And set the stars of glory there.
She mingled with its gorgeous dyes
The milky baldrick of the skies,
And striped its pure celestial white
With streakings of the morning light.6 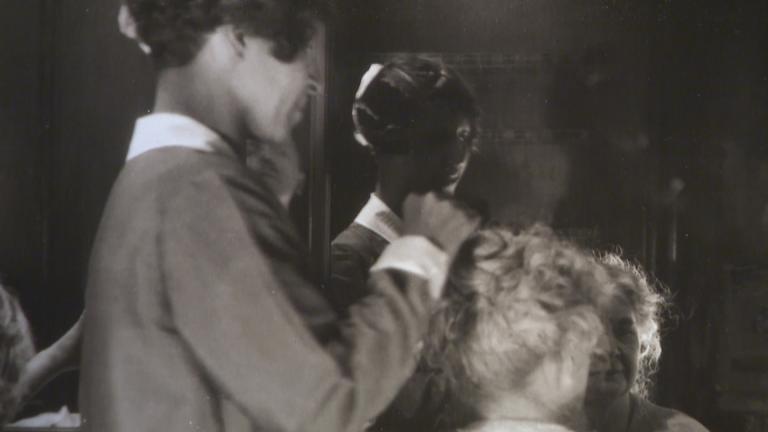 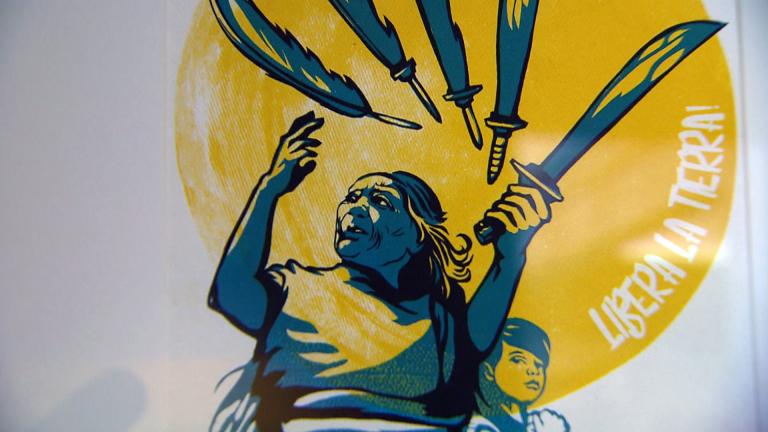 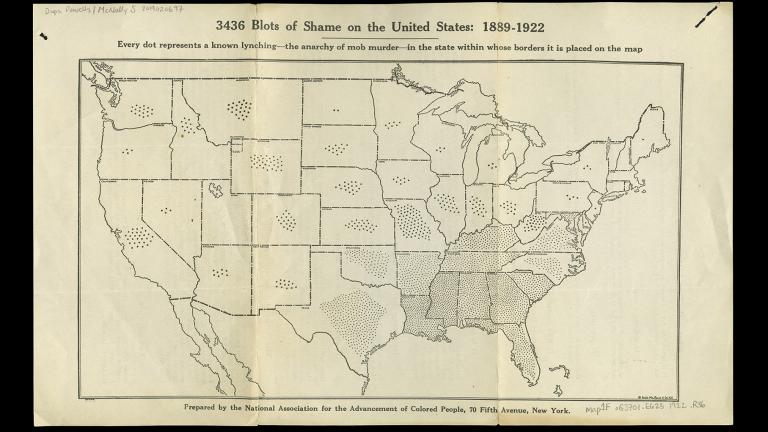 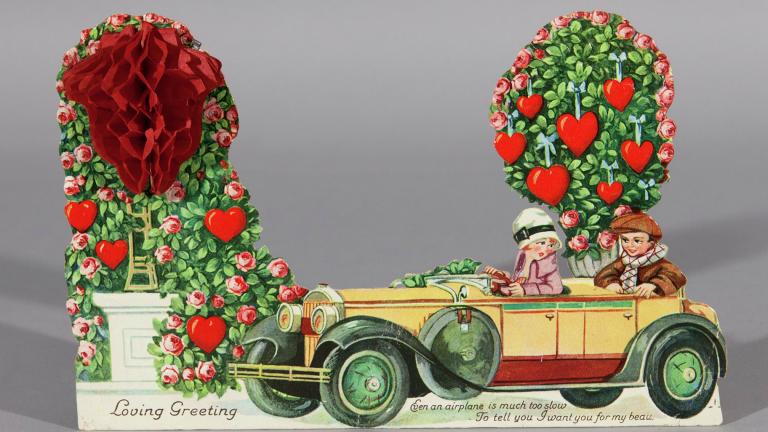 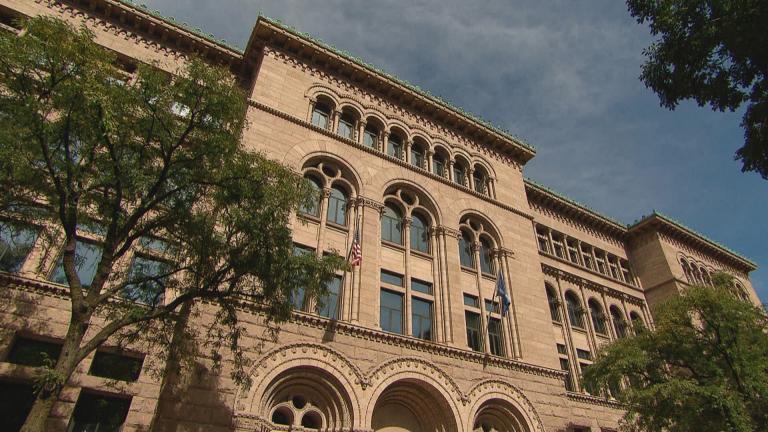