The new Art Institute of Chicago exhibition, Impressionism, Fashion, and Modernity, is the first of its kind to look exclusively at the ways in which the Impressionists used fashion to communicate the idea of "modern." We get a preview from the exhibit's curator Gloria Groom. The exhibition was organized by The Art Institute, The Metropolitan Museum of Art, New York, and the Musee d'Orsay, Paris. A catalog with the same name was published by AIC and distributed by Yale University Press in conjunction with the exhibition. Read two excerpts from the catalog and view a slideshow of artwork. 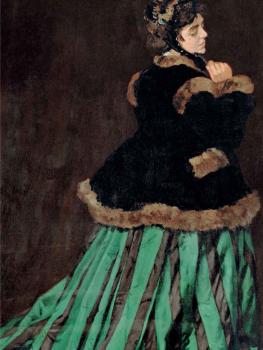 In February 1866, having temporarily abandoned his monumental Luncheon on the Grass (cats. 38, 39), Claude Monet hurriedly prepared a new canvas showing his nineteen-year-old mistress, Camille Doncieux, in a green-and-black striped walking dress, small “Empire” bonnet, and fur-trimmed jacket (cat. 16). For an artist with no official academic standing at the Salon (where he refused to be listed as a student of his official teacher, Charles Gleyre), Monet’s life-size Camille was the equivalent of a Prix de Rome, his first success in the Parisian art world and his largest finished canvas to date.1 It was both courageous and conservative, undertaken to garner critical support as well as to placate his aunt Marie-Jeanne Lecadre, who had threatened to cut off his monthly allowance.2

Portraits were a mainstay of the Salon of the Second Empire and in 1866 made up approximately one in seven of the 1,998 paintings listed in its catalogue. Some were designated by full names and titles, or more commonly by the euphemistic “Monsieur X,” “Madame X,” or “Mademoiselle X.” Just a handful of the portraits at the 1866 Salon, Camille among them, were titled with first names only.3 If Monet’s intention for Camille was to elevate his mistress to a bourgeois status more in keeping with his family’s, as Mary Gedo suggested, by titling it thusly he “inadvertently or purposefully, cast aspersions on the moral and social status of his companion.”4 Camille was deemed familiar but not recognizable, or, as Charles Blanc perceived, not quite a portrait.5 Devoid of anecdotal, moral, or physiognomic details, the painting was commented upon, if not admired, by almost every critic. Théophile Thoré, for example, praised the “large portrait of a standing woman seen from behind trailing a magnificent green silk dress, as dazzling as the fabrics painted by Veronese.”6 READ THE FULL EXCERPT HERE. 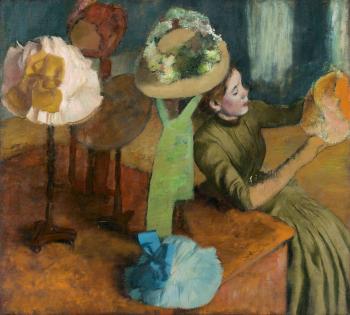 The source of ornament. Think of a treatise on ornament for women or by women, based on their manner of observing, of combining, of selecting their fashionable outfits and all things. On a daily basis they compare, more than men, a thousand visible things with one another. —Edgar Degas1

Edgar Degas’s observations on women’s ability to choose their dresses and accessories from a variety of possibilities presaged his active interest and participation in shopping. Indeed, he is known to have accompanied the artist Mary Cassatt and Madame Émile Straus (the cousin of his friend Daniel Halévy) on visits to dressmakers and millinery shops in the late 1880s and early 1890s.2 Acutely attentive to women’s fashion in general, he was most intrigued by the chapeau. The essential crown and status symbol of any respectable woman, the hat represented an independent accessory that nonetheless must be matched to her visage and outfit—an ornament to be admired, acquired, and above all held and tried on.3 Unlike dresses, which could be all but manufactured—and, by the 1870s, made from how-to kits following basic patterns available in magazines—hats, even those in grands magasins (department stores), where they were displayed in separate rooms, were individualized and expensive (cats. 109–11). This fashion statement inspired Degas to create some seventeen pastels and four oil paintings. Apart from a “modiste” exhibited in 1876 at the Second Impressionist Exhibition (still unidentified), his works on the millinery theme can be divided into two categories: those made around 1879 to 1886 showing interchanges between customers and milliners; and those dating from the 1890s through 1910, which were often reworked from earlier subjects and from which bourgeois clients were largely excluded.4 READ THE FULL EXCERPT HERE.

Impressionism, Fashion, and Modernity is at the Art Institute's Regenstein Hall through September 29, 2013.

Marc Vitali and Yasmin Rammohan contributed to this report. 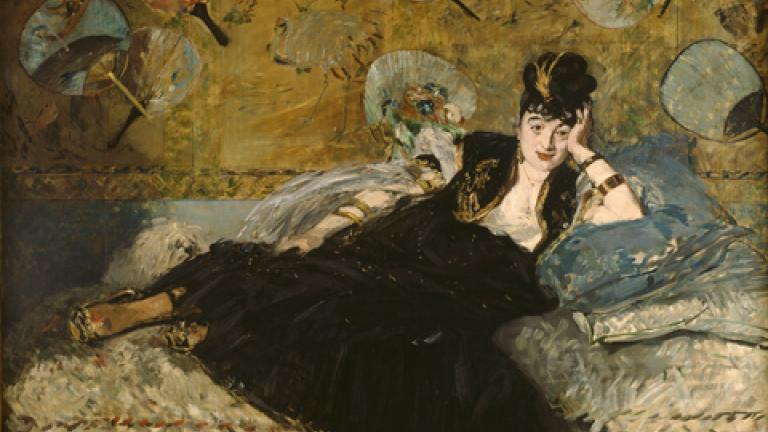