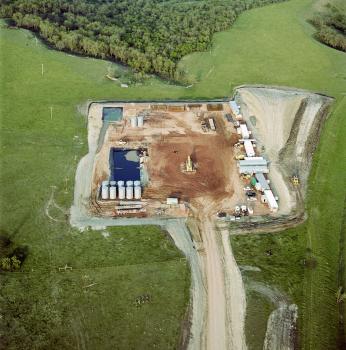 Hydraulic fracturing or fracking is the process of forcing pressurized water and sand mixed with chemicals underground to release oil and gas.

Farnsworth worked with photographer Terry Evans on this Field Museum exhibit. The women traveled to North Dakota to capture the effect fracking is having on the land and communities.

Evans has photographed the prairie for the majority of her career and wanted to branch out.

“I had done everything I could think of about prairie, and I started out photographing the untouched virgin prairie,” says Evans. “And now, it has come to this point where the prairie is being very damaged and very changed.”

On May 31, the Illinois House and Senate passed a bill that puts in place fracking regulations for the state. Supporters of the bill hope it will kickstart the economy in some southern Illinois towns.

“Today’s passage of hydraulic fracturing legislation in the House brings good news for jobs, economic development and environmental protection in Illinois,” said Gov. Pat Quinn on May 31 about the passage of the legislation. “ This legislation will unlock the potential for thousands of jobs in Southern Illinois, while ensuring that our state has the nation‘s strongest environmental protections in place for this industry.”

One of the co-sponsors of the bill looked to North Dakota as an example of how fracking has changed a state’s economy.

“In North Dakota, $70 million a day of oil is coming up. You take the royalties from that…that’s a lot of revenue for the state,” says State Rep. David Reis, a Republican from downstate Olney.

This bill will require companies that drill in the state to disclose the chemicals they use. Companies will also be required to test water before and after fracking.

“There are winners and losers in this boom, as there are in any economic boom,” says Farnsworth.

Big money can be made through this process.

“We are looking at a potential of one billion barrels of oil,” says Kevin Reimer, a geologist in downstate Harrisburg.

View Fracking in a larger map

And watch Paris Schutz's story on “The Fuss over Fracking” below: