"The Road to War"

The last time an American president asked Congress for a declaration of war was in 1941, after the Japanese bombed Pearl Harbor. But the U.S. has since waged war in Korea, Vietnam and the Middle East, all without formal Congressional authorization. Longtime CBS and NBC News correspondent Marvin Kalb says this new normal undercuts Congress' constitutional authority and undermines America's reputation worldwide. Kalb is author of the book, The Road to War: Presidential Commitments Honored and Betrayed. He was chief diplomatic correspondent for NBC News and host of Meet the Press.

Marvin Kalb joins us on Chicago Tonight at 7:00 pm. We spoke with him about the legal evolution of America's wars. 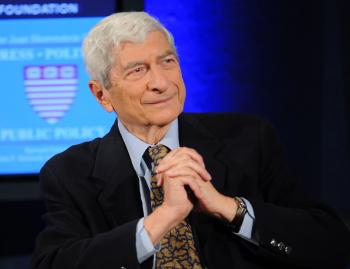 Presidents may not ask for formal declarations of war from Congress, but they ask for military resolutions and funding. If they're still beholden to Congress in some ways to carry on military operations, why don't they formalize what they're asking for?

The answer starts with Harry Truman. He promised Congress he would go to them to ask permission for war, to ask them to declare war. But he chose not to do that, and termed the Korean War a "police action" rather than a war, so he felt it was unnecessary to ask for a declaration. If you ask for a declaration, it obliges you to do certain things. He felt he had more freedom of action without it. For example, you have to explain to the American people why you are asking their children to fight in a war.

As you say, Truman made an explicit pledge to go before Congress to approve any future military efforts. But that was the status quo for every American president before him. Why would he make a pledge over something that he was expected to do?

He was the new guy on the block. He followed an icon, a four-time elected president. And he comes in not as an elected president, but as someone who inherited the office. So he wanted to make sure had good relationships with everyone. And he came from the Senate, so they were his colleagues. He felt obligated to say to his colleagues, I’ll be with you. And we were suddenly in an atomic age. Everything was new, different and frightening.

No branch of government gives up power easily. Why didn't Congress make a stronger argument for their Constitutional power when Truman went around them?

Since that time, there have been 12 presidents. And they all faced war and they all have chosen not to incorporate Congressional cooperation and collaboration. We need to look at this more carefully. Congress goes along with anything that a president has declared in the area of national security. On foreign policy, most of the time, when the president asks, they say yes.

A declaration of war means an all-out national commitment. A Congressional pat on the back, that is the minimum that a Congress ought to do. It ought to challenge the president. He is our commander in chief, but he’s not god and he’s not a king. But he’s now the master of the internet, the master of television, and the Congress feels it is so absorbed with its own problems. Every Congressman spends between 40 and 70 percent of every day on fundraising. They don’t have time for legislation. 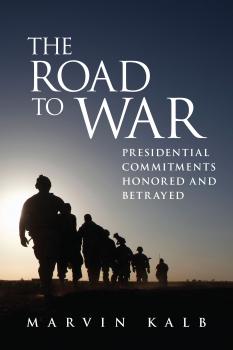 You were diplomatic correspondent for a long time. At what point did this become a trend in your mind and not a few outliers?

During the Vietnam War. If you look at the book, there are five to six chapters describing the way presidents got us into the war. Ask yourself: without a declaration, how did they get us into the war? Step by step, they meandered into a dreadful war, commissioned 500,000 troops. I began to think while I was covering this, when did we have a declaration of war on this thing? Oh, we didn’t. The question was stuck in my mind for years. This has always been the issue I felt I had to write about, and when I finished my last book, I knew that I had to address this larger question.

You close the book calling for a treaty to “institutionalize the US-Israeli relationship.” But you also write that such a treaty was attempted under President Clinton, but it fell apart. Do you have any hope such a treaty could be achieved in the near future?

I don't think it will happen in the near future. It will depend on the progress of an Israeli-Palestinian peace. This is a tricky thing. I was trying to show you that if you deal with Korea as a model, there’s a mutual defense treaty and reaffirmed every year. It is one of the best models for how the US has a relationship with a smaller country. It doesn't mean that on every occasion we’ll agree. But they know what the rules of the road are. With Vietnam, we had no rules. With the Israelis, we have an extraordinarily close relationship, but we need it formalized. Our best relationships, like NATO, are those based on a treaty so that the American people have signed on to a set of rules governing the relationship rather than everything depending on a president. A president can make a commitment--George W. Bush made two huge commitments to Sharon. But when Obama came in, he basically abrogated both of those promises. He said that’s not how it’s going to work. Israelis felt they were screwed by the US in 1967 and don’t want to go through that again.