Chicago Public Schools releases a list of schools that are still being considered for closings. Elizabeth Brackett has the latest on Chicago Tonight at 7:00pm.

Chicago Public Schools Chief Executive Officer, Barbara Byrd-Bennett, released an updated list of schools that remain under consideration for closing. After reviewing community feedback gathered by the Commission on School Utilization and input from CPS community meetings, the criteria for determining underutilized schools was updated.

What began as a list of 330 underutilized schools has now been cut down to 129 schools using the updated criteria.

The 129 schools listed won’t all be recommended for closure but will undergo a second round of community meetings beginning Wednesday, February 13. This preliminary list is expected to continue shrinking in the coming weeks as CPS gathers community feedback.

Additionally, schools that were removed from consideration will not be closed due to underutilization but could be impacted in other ways like grade alignment, co-location, turnaround, etc.

The updated criteria are meant to aid the District’s $1 billion deficit in the upcoming fiscal year in addition to the high rate of underutilized schools in the District.

“As a former teacher and principal, I know that our limited education resources are spread much too thin,” said CPS CEO Barbara Byrd-Bennett. “By combining schools that lack sufficient numbers of students, we can redirect our limited resources to give all of our children the quality education they need and deserve to succeed.”

CPS will make their final recommendations for closings by March 31.

“I will not close any school where I don’t have confidence that children will have a safe and smooth transition at welcoming schools next fall,” said Byrd-Bennett.

The District has space for 511,000 students but there are currently only 403,000 students enrolled, with nearly 140 schools half empty.

View the list of 129 schools still under consideration for closing. 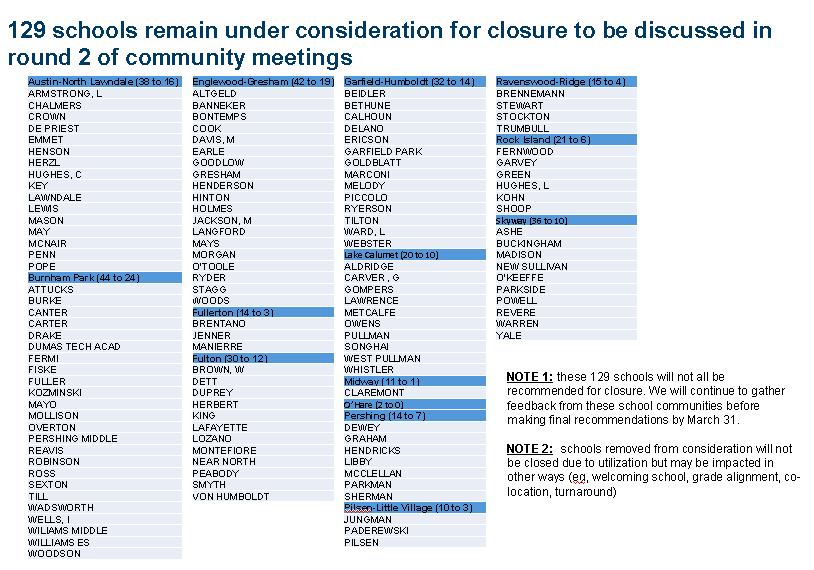