Bicentennial of Battle of Fort Dearborn

Chicago Tonight spoke with the Chicago History Museum’s Executive Vice President and Chief Historian, Russell Lewis, about the Battle of Fort Dearborn. Read our Q&A and view a slideshow of photos.

Fort Dearborn was both a garrison and a trading post. How did it become the center of growing unrest? 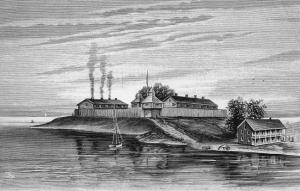 This whole area in the Chicago region was kind of a disputed area. The French were here originally and then the British and Americans moved in, but the original inhabitants were natives from various tribes. This was a lucrative area because of the fur trade. After the U.S. won concessions from Britain after the Revolutionary War, they won this strip of land along Chicago, ceded by native people. Construction of this fort ensured military presence to monitor this new expanding territory and settlers, and also as an attempt to wrest control of the fur trade from the British and French. It was typical of fur traders to marry into native societies, so it was a pretty diverse group of people, lots of mixes of nationalities coexisting, but it actually was fairly peaceful, and there was not a lot of conflict until 1812.

Fort Dearborn was a military outpost, and was important as a symbolic and physical extension of Americans into Western lands. Certainly people who had been in Chicago a while were upset about the upstart American post. It was the biggest structure in the area, and had a lot of power and had the federal government behind it. It was a threat to their livelihood.

How much did the occurrences at the Battle of Fort Dearborn ultimately affect the fate of Chicago? 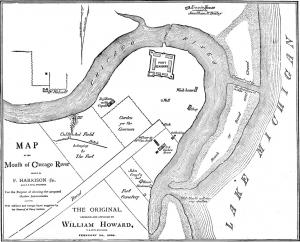 I think because it was the defeat of Americans early in the war that it became a rallying cry for Americans. In terms of Chicago, the fort was burnt to the ground. There was the possibility that people might abandon the area, but they didn’t, and they came back and rebuilt the fort in 1816, and it thrived. It was a big blow to the community when the battle took place. People that lived here coexisted in harmony and worked together, and had their differences, but were able to get beyond that. We can think of it as the first neighborhood in Chicago. Like every neighborhood in the city, there are tensions and conflict, but people find ways to get along.

How have these events been reinterpreted over the years?

One of the challenges of writing about these kinds of events is you have limited sources. Historians are always looking for more sources, to get multiple points of view. We have sources from some of the people involved -- white Chicagoans -- but we don’t have anything from native people. We don’t know their perspective on it. Sometime later on one of the native descendants, Simon Pokagon, criticized the massacre with the famous quote: “When whites are killed, it is a massacre, but when Indians are killed, it is a fight.” I think the biggest shift is not calling it a massacre and calling it a battle. It’s a significant shift, but also understanding that this was more or less a community. Prior to this, they coexisted fairly in harmony. Television and other depictions always want a dramatic element to it—conflict—always settlers vs. Indians, and that perspective is not exactly true. It’s a much more complex situation. Some native tribes were with British, some with Americans; they made choices and lives played out accordingly. The biggest interpretation though has been the language, from calling it the massacre of Fort Dearborn to the battle of Fort Dearborn.

How can we bring together these stories to recognize a shared past instead of a divided one?

I get a little annoyed when people say it’s political correctness, as a practicing historian. For history to have value in our society, it’s great when you can find it does more than entertain, but actually does something. When history is an agent for reconciliation, it’s a powerful and wonderful thing. But let’s not forget, unfortunately it was a war, and horrible things occurred. War is license for 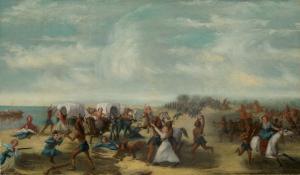 people to do things they would never imagine under normal times. Reconciliation is an important thing. We’ve seen it happen in Vietnam, where Americans have gone back and revisited and met people that were once considered enemies, and talked about their experiences. With the Japanese in World War II, after we dropped two atomic bombs, they didn’t call it a massacre or seek revenge or hold a grudge forever. I think this reconciliation is really an important thing that history does. Often times it’s up to us, those who inherit history, to do for our past forbearers what they couldn’t do themselves -- reconcile.

Jean Baptiste Point Du Sable was here before Fort Dearborn, and is considered the first non-native settler. Fort Dearborn represented the ultimate end of native presence in Chicago as people knew it. Now there’s a different native presence. Chicago has the second largest urban native population. Most people here are not from the Chicago area, but from all over.

How can we memorialize the early Chicago landscape in a way that is inclusive of all foundation stories in the American era, and that acknowledges Chicago was part of the Indian country as well? 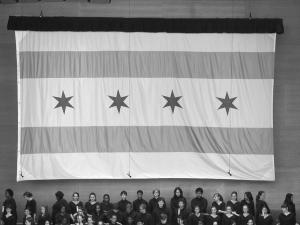 I think it’s trying to understand again that there were people here before European explorers arrived, and one of the biggest differences between European and natives is that natives didn’t feel like you could own land. You couldn’t give away land in a treaty because they didn’t feel they owned the land in the first place. It was something spiritual that was owned by everybody. As we have come to realize in more recent years how fragile the earth is, that approach to having a relationship with the world we live in may be a more viable one -- a future where we have reverence for the land.

Native cultures and religion have something to teach people about how to conduct themselves in a way that is appropriate. There are different ways to see land and have a relationship, and it could be very fruitful. More and more you will see acknowledgement that this place was inhabited by native people who had continuous existence for thousands and thousands of years. Illinois and Chicago are both native names, and Illinois is also home to the greatest concentration of native people in Cahokia for a millennia. There’s a rich history in this state, and in Chicago, that is not commonly known, and we don’t take the time to know it.