"Wounded I Am More Awake: Finding Meaning After Terror"

A psychiatrist and a journalist join together to tell a story of genocide and healing. Julia Lieblich and Esad Boškailo join us on Chicago Tonight at 7:00 pm to discuss their book, Wounded I Am More Awake: Finding Meaning After Terror. Read an excerpt from the book and view a photo gallery from the Bosnian concentration camps. 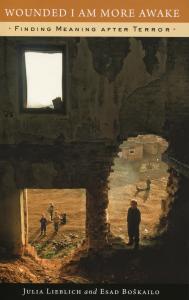 Then came July 13, 1993, and everything changed for the worse. The Croatian Defense Council suffered enormous losses against the Bosnian army on the battlefield. The next morning the prisoners asked the guards to let them out of the hangars so they could urinate in the canals. But the guards would not open the doors, so they had to relieve themselves in the hangar. Some men got so thirsty they drank their own urine.

For three days after the Croatian army’s losses, the guards would not let the prisoners leave the hangars. They had no water or food, and the temperature was rising.

Finally, several of them banged on the hangar walls. That was when the shooting came, as if out of nowhere. Guards on the outside began shooting with machine guns into the hangar.

The men got down on their stomachs and covered their heads with plastic bags filled with underwear and T-shirts, as if they could stop bullets.

Hamo, who was on the left of Boškailo, was hit in the back of the head with two bullets. Sejo, lying on his other side, was struck in the shoulder.

The men were bleeding and screaming in pain when suddenly the shooting stopped. A couple of people brought blankets to hide the wounded from the guards. Some of the prisoners had been taken to the camp straight from the army units, so they still had their first-aid kits with dressings. Boškailo had a nail clipper. Somebody brought a cigarette lighter so he could sterilize it. One by one the wounded crawled over to him or the men would carry them, and he picked fragments out of arms and hands with his fingers, which was not difficult given that the men were emaciated: all skin and a little muscle.

For deeper wounds he would operate at night while a man held a blanket over him and another held a cigarette lighter. He would cut open the skin with a razor blade and take the fragments out with a needle and the nail clipper.

Remarkably, given the shape they were in, Hamo and Sejo survived.

By day Boškailo no longer had the strength to move in the heat. He was lying down, urinating and defecating in place. In the beginning they all relieved themselves in one corner, but later they could no longer get there. Nobody was able to move.

On Day Four, the guards brought in sixty liters of water for six hundred people. Boškailo urged the men to drink their small portion slowly to avoid getting sick. One man gulped his and collapsed instantly. Then the shooting began again.

Boškailo continued to take out the fragments in a trancelike state.

“You know how many were killed in Dretelj? I cannot tell you how many. They broke thousands of bones, destroyed thousands of kidneys. And nobody came out normal.”

“I know it was not Auschwitz. But who said that Auschwitz is the benchmark for terror? Do we need another Auschwitz for the world to intervene?

“Why didn’t the United States and the international community help us earlier? Where was the United Nations when news reporters were broadcasting stories of atrocities occurring throughout the country, when emaciated men and women were wasting away in camps?

“Wasn’t it bad enough in Bosnia to deserve a more significant UN presence? Did we need another Auschwitz before the United Nations would send peacekeepers who had the means to keep the peace?

“A couple of years after getting out of the concentration camps, I met a man and wife who had survived Auschwitz, and there was an immediate and unspoken recognition. When we sat down to talk it was as if we were the only ones in the room. They wanted to know everything about camp life. Did we have bathrooms in the barracks? How many minutes were we given to eat scalding soup? Did we get wounds in our mouths? Did the guards come in at night and hit people? When a guard came into the barracks and pointed out a man, did we know he would be taken out and shot?

“Never did they ask, Was it bad enough?”