Tony and Pulitzer prize-winning actor and playwright, Tracy Letts, talks about opening a hit Steppenwolf production on Broadway -- and upcoming film adaptations of his plays on Chicago Tonight at 7:00 pm. Watch an interview with Anna Shapiro, the director of Three Sisters, adapted by Letts, view a photo gallery from Three Sisters, read a Q & A with the Three Sisters' dramaturg, and watch web-exclusive rehearsal videos from The Dresser, starring Tracy Letts.

Director Anna Shapiro talks about the production of Three Sisters, adapted by Tracy Letts, in the following video.

Chicago Tonight spoke with Dassia Posner, a Russian scholar and dramaturg, who was integral to the creative process for Three Sisters, aiding Tracy Letts and Anna Shapiro in adapting and translating the script from the original Russian.

How did you get involved with this play?

Anna Shapiro asked me to work on this project. I was brought into Northwestern to teach in the theater department because I’m a Russian scholar and dramaturg. Anne started to prepare pre-production work and asked me to come on board. It’s a wonderful thing working with Anna and Tracy, and the team at Steppenwolf. I’ve done dramaturgy for a number of different projects, but it was the first time I was able to combine Russian history theater expertise with dramaturgy for a Russian production. I know Tracy wanted to make revisions and Anna was interested in not only what I could contribute in cultural and historical context and answer actor questions, but really going back to the Russian and picking apart what it means. This gave Anna more tools to work with as a director, and Tracy has resources in development and finalization of his script.

Could you explain what your role is as a dramaturg?

It’s interesting because Anna and Tracy are generous artists, so what I was able to do exceeds the traditional role. A dramaturg can be involved in translation, adaptation, new play development and other script work. There’s also production dramaturgy, and sometimes the two meet. I did everything from pre-production meetings where I went through the play line by line and I explained the original Russian, and I created literal translations for Tracy and Anna to use. I generated research materials for Anna to use. I put together an 80-page packet with my assistant that actors could have to explain Russian names, schools at the time, all the different literary references, the role of Russian women—anything that they needed to feel like they could fully put themselves in the place of the characters. I answered questions throughout the process. It was just this wonderful collaboration back and forth, and we would come to a decision often together about how a line or moment could move forward. 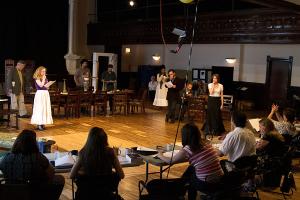 What was the process like adapting and translating this play from its original Russian?

What was interesting was that Tracy came into the process already having worked with a couple other people. He worked with a published translation and did his best to piece together meaning from that. He worked with another woman, a Russian scholar, who was very generous and did e-mail correspondence with him and answered questions. He came in with a solid draft but my understanding was that he really wanted the language to be active and vibrant, and in order for him to make the final changes, he needed to hear it in the mouths of really good actors. I was also the person who would interfere a little bit saying, ‘that’s a great line but the Russian takes it in a different direction and I just want to make sure you have all the information.’ Sometimes he (Tracy) would steer in the direction of Russian and other times adaptation and do what works in that moment.

What new insights have been brought to this classic story?

The most innovative thing about his adaptation is it’s very direct and very honest. It’s still very firmly set in 1900 Russia, but he didn’t want the language to sound so far removed that people felt like they were watching something that was precious and had too much nostalgia. He wanted the audience to recognize themselves in these characters and I think that’s happened. One thing I like to do after opening to an audience is to be a fly on the wall and listen to conversations. A lot of audience members did say, even ones that were familiar with the play, that they made some really unexpected discoveries in relationships between characters, and did feel more immediate to them.

What essentially is this play about?

It’s a play about people who move away from their home and want to go back, who think life will be one way and they realize that life goes in different directions. They want other things with life that don’t happen, and yet they find a way to go on living, just as we do all the time.

What is the play about for you?

I think the play is very relevant with the state of the economy in the past years; people have suffered and found their lives and jobs maybe not going in the direction they wanted. This is a play that deals with that really openly. It’s not a happy ending in the sense of everything working out, the prince gets the princess at the end. But I think it’s a hopeful ending none the less, when things in life happen that are difficult, you give up or you push through, and these people push through. 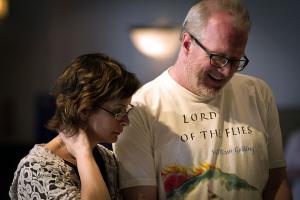 What was it like working with Tracy Letts and Anna Shapiro?

It was absolutely wonderful. Best rehearsal process I’ve been a part of. Tracy and Anna are witty and full of humor, relaxed yet focused, and they have a really good way of bringing out the best of everyone they’re working with. Anna and Tracy are both generous artists and willing to allow other artists into the process. It’s a collegial, creative room, where everyone’s work is respected.

How would you classify this play?

It’s both comedy and drama. People ask that a lot because of the way Chekhov describes the play himself. His little one-acts were actually called “jokes” in Russian. Some of his plays he called comedies, this play he called a drama, but there is such a wonderful pairing of the ridiculousness of situations we find ourselves in with the tragedy of things that don’t go right. It’s all mixed up in its own thing. That’s what’s wonderful about Chekhov and the adaptation, it’s about how lives are all mixed up together and the play really captures that.

Back in 2004, Chicago Tonight shot rehearsals for The Dresser at Steppenwolf. Featuring Tracy Letts, the play kicked off the fall season that year. The 1980 play was written by Ronald Harwood, and tells the story of an aging actor and the assistant (his "dresser") who helps keep his life in order.

Tracy Letts is joined by actor John Mahoney and director Amy Morton in the play. Watch web-exclusive videos of rehearsals from The Dresser.

In the following video, Morton’s voice is heard telling the actors to begin. Letts’ character enters and is horrified to find Mahoney preparing make-up for Othello (when he should be prepping for King Lear). The actor corrects himself and then shares a risqué joke.

In the next video, Mahoney says: “It’s easier to climb than to hang on.” Morton interrupts with a suggestion. The actor pantomimes putting on his own make-up and notes that he’s getting older.

And in the final rehearsal video from The Dresser, Mahoney speaks of aging again. Morton interrupts to figure out some scene blocking, the practical logistics of how things happen on stage.