Allison Lacher is a Springfield-based installation artist. Her work playfully explores the themes of adolescence, naïveté and vulnerability, often associated with coming of age transitions. She uses ambiguous narratives, which blur the lines between fantasy and reality, to evoke an emotional response from the viewer. Lacher’s installation, That’s Love, Baby, is a culmination of these working narratives. The installation is an emotionally charged space that the viewer interacts with, imposing their own personal narratives to help craft the story. 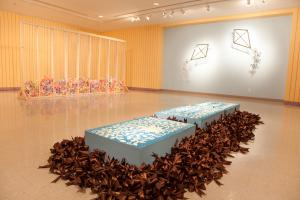 That’s Love, Baby was first exhibited at the University of Illinois Springfield Visual Arts Gallery, where Lacher is an Adjunct Assistant Professor of Visual Arts and Gallery Manager. The installation is now remounted at the Backspace Collective in Peoria through the end of July.

Many of the pieces featured in this exhibit were cultivated back in 2011, during Lacher’s one-month artist in residency stay at the Prairie Center of the Arts in Peoria. Going into the residency, Lacher was uncertain what she was going to work on, but ended up leaving with several study pieces for her latest installation.

“Shortly before going into the residency, I very seriously considered not making work at all, but that residency revived me in every way possible as an artist,” said Lacher.

While there, Lacher said she had the freedom and opportunity to fail and experiment in an encouraging, safe environment, that she calls the “best kept secret in Illinois.”

While at Prairie, Lacher met artist Erin Zellefrow, the program director for the Prairie Center of Arts at that time. Zellefrow says part of the influence on Lacher’s latest installation had to do with the equipment available to her.

“I think she had already been toying with some ideas and concepts. But her time at Prairie allowed her to utilize different mediums,” said Zellefrow. “We were able to offer her use of the water-jet cutting machine, that often artists don’t get to use. I could see the artwork development partially through different technology coming into play.”

The water-jet machine was used to cut metal into the shape of kites, which are displayed in the exhibit. While they are literally kites, Lacher says they’re metaphors as well, serving as mirror images of one another. 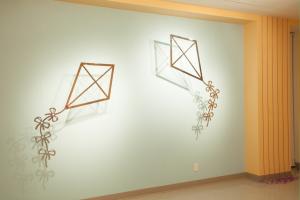 “I often just think about them as highly admiring one another to the point of this constant reflection on one another,” said Lacher. “But they’re intentionally hung so that some viewers will see them as happily co-existing, but I think there is another context that can be identified because they’re also on a collision course towards one another.”

Zellefrow watched the growth and development of Lacher’s installation piece, which she says can evoke a sense of nostalgia on the viewer.

“It’s something I get a lot of enjoyment out of,” said Zellefrow. “It takes me into a soft, whimsical place that brings back memories of my own childhood, that I think can resonate different for whoever is in the space.”

Lacher’s work is inspired by her personal experiences, especially this latest installation.

“I experienced death in the most significant way, and ended up losing the greatest love I'll ever know,” said Lacher. “I was 31, and had never even really been hurt before, but found myself very brokenhearted, of course. It opened the door to adulthood, although I had already been convinced that I had stepped through that long before. This work is a reflection on the love and the consequences of loving freely.”

One signature mark of her work is the bow -- technically a knot -- which for her represents naïveté and vulnerability. 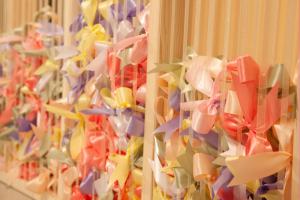 “They seem very confident in their status as a knot, naïve to the fact that if pulled, one end comes undone, and you can try to retie it, but it’s never quite the same ever again,” said Lacher.

With this installation piece, Lacher says she’s closing the investigation of naïveté and vulnerability, and transitioning to a new chapter in her work that will explore the theme of “willful ignorance.”

View the slideshow below for more photos of the installation, and watch Chicago Tonight at 7:00 pm to learn more about Lacher's work in our Arts Across Illinois segment.