One of the rarest astronomical events happens on Tuesday. We hear from the Adler Planetarium about what it is and how you can view it on Chicago Tonight at 7:00 pm.

Chicago Tonight spoke with Adler Planetarium astronomer, Dr. Mark Hammergren, about the transit of Venus and its significance to the astronomical world. Also, check out tips on how to view the Transit of Venus safely below. 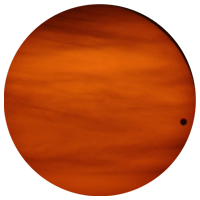 What is the Transit of Venus?

In general, a transit is when a planet passes in front of its star. In this case, the transit of Venus is when the planet Venus passes in between the sun and Earth. It will pass in front of the face of the sun as we see it.

Is a transit the same as an eclipse?

Eclipse is generally a term given when nearly the entire sun is covered. That’s something that the moon can do, but it’s not something, at least for us on Earth, that Venus can do from our viewpoint. Even though the planet is so far away, it will appear to be a tiny, round circle that passes in front of the sun.

When will it be visible in Chicago?

People can see it from around 5:00 pm Tuesday through sunset.

There are some viewing precautions people need to take when the Sun is involved. What should people know?

For the transit of Venus, we give the same kind of warning as we give during eclipse. It’s not that the sun’s going to be exceptionally bright on Tuesday, there’s just usually no reason that people want to stare at the sun. People may try to look at the sun in order to make something out without the appropriate protection. Our biggest recommendation is that people don’t try to stare at the sun without appropriate protection. Doing so could cause damage to your retinas. (Scroll down for information on how to view the transit safely.) 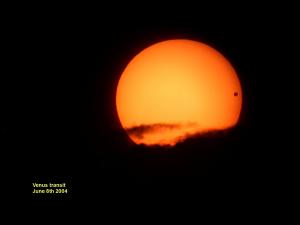 The transit of Venus usually occurs in pairs (the last one happened in 2004.) Why is that?

It’s a function of the geometry of our solar system. The Earth’s and Venus’s orbits are tilted relative to each other. They only line up appropriately under certain circumstances. That’s the way it works out. It happens in rough pairs over a hundred years. The pairs are generally eight years or so apart. Like what we see now. The last transit before 2004 was in the 1800’s, and we won’t have another transit until 2117.

Why the large expanse of time between the transits?

Not only does Venus have to be at the proper place, but Earth does as well. There are only two points in their orbits where the two planets cross each other. Venus and Earth are traveling along separate orbits, and both have to be at a certain point, at a crossing line along those orbits.

As an astronomer, how does it feel to view such a rare astronomical event?

It puts me in touch with my historical roots as an astronomer. The transits of Venus were some of the only ways past astronomers had to gauge the size of our solar system. The only way of determining the absolute size was to determine our distance from sun. This alignment would provide a simple geometric way of determining that distance. If you look at the transit of Venus from two very separated places on earth, you can observe what’s called a “parallax.” What that means is that the track of Venus as it passes across the face of the sun would be different from one viewpoint compared to the other. We use this technique all the time with our binocular vision to determine distance. You need a much bigger baseline as an astronomer. Getting that big baseline is what inspired some of the great voyages of the past. Captain Cook’s expedition to the South Pacific was to do an observation of the transit of Venus.

Were they able to track that information back then?

What was the environment at the Adler Planetarium during the 2004 viewing?

It was a very much a party. It was fantastic. We had a big crowd out here. There were hundreds of people, and this was at sunrise on a weekday. What I thought was the best of all was that some of the television networks were breaking into their morning news shows with live coverage of the event. It was very exciting!

How to view the Transit of Venus safely:

With a telescope/binoculars (via Society of Popular Astronomy) :

For more information on the Transit of Venus and how to view it, watch the video below.

Watch a video of the 2004 transit below.