Protesters take to social media for the NATO summit. We take a look at some of the latest livestreaming tools and analysis of Twitter trends on Chicago Tonight at 7:00 pm. 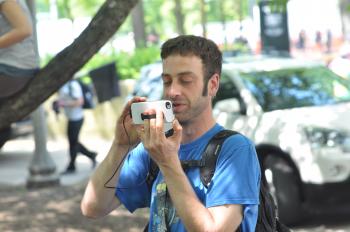 At the NATO rally on Sunday, dozens of protesters were shooting video from their smartphones or iPads, streaming it live to their followers on sites like Livestream or UStream. Chicago Tonight spoke with one of the livestreamers, John Ziegler, who uploads his videos as rebelutionary_z on UStream.

Livestreaming is so important to replace mainstream media because this is unedited. Until the minute I stop this tape, this is unedited. And then this video will be on my channel. The people in Zuccotti Park started their own independent media campaign and got the ball rolling on that. The mainstream media does not report accurately. They edit things out of context. They show five minutes, just the clashes with the cops. And they call it that, “Protesters Clash with Police.” They never show what happened, how it happened, or what the aftermath is. That’s why the independent media revolution happened in New York, and the livestreaming came from there. The mobile streams blew up there.

How has advancing technology helped you maintain a stream?

Even just a few months ago, people were using their laptops to stream, not mobile devices. Now companies like UStream have a mobile application, and I have a high-quality camera on my iPhone here. Somebody who’s poor like me and only makes $10 an hour can go out and buy this equipment and get up streaming immediately. 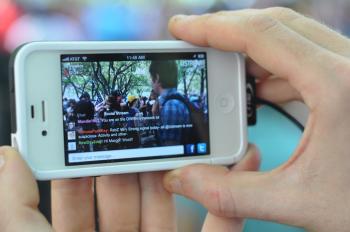 A lot of people already interested in the anti-NATO or Occupy movement in Chicago are already here. Do you have a sense of how many people internationally or nationally are watching you?

From the minute I started livestreaming—the first march I ever did was an anti-police brutality march here in Chicago—I had people from France checking in, I had people from South America checking in. Even watching the two of us talk right now, I have great friends who are working or at home watching. They’re not viewers—they’re human beings who care about the same things I care about and for one reason or another aren’t able to come down here.