A couple of American Bald Eagles have captured the attention of elated bird watchers and photographers. The pair was spotted nesting in a Cook County Forest Preserve in Palos Hills a month ago. Even more exciting is the fact that the nest had been home to eggs that officials say recently hatched.

We met up with a nature photographer who may have captured the first images of the newborns. 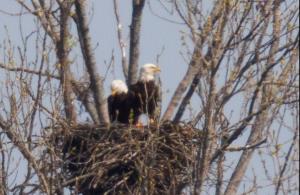 Officials say the hatching of eaglets in Cook County hasn’t been seen in over a century.

But just across a pond in Palos Hills, people have been gathering to try and catch of glimpse of the American Bald Eagles and their newly hatched eaglets.

Steven Ambrose, who has been an avid bird watcher for the past six years, was the first to spot the eagles nest on March 17 -- by chance.

“I was actually driving with my stepfather, and we were on a bird-watching trip and we were going from one site to the other, and I just spied it out of the corner of my eye, that it looked like a large nest and the way the sun was hitting it, it looked like there was a white head that was coming out of it,” said Ambrose. “And knowing how rare it was, I actually didn’t say anything. I just thought I saw a nest and waited, and came back by myself later in the day and confirmed that it was indeed a bald eagle nest.”

Ambrose reported the sighting to the Illinois Ornithological Society and fellow nature enthusiast and photographer, Jerry Goldner. The two kept the nest a secret for nearly a month to prevent an influx of viewers from scaring the rare birds off. 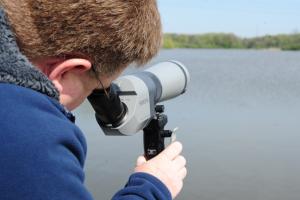 “We kept it under our hat, but somebody within the last 24 to 48 hours let the cat out of the bag, or the eagle out of the nest, I guess,” Ambrose said.

On Wednesday morning, Goldner captured on camera what are believed to be the first images of the newly hatched eaglets being fed by one of the adult eagles.

“Very excited about that. We thought we saw the eaglets last week actually, but they were so small that it looked like a twig. But now today, we’ve got proof with video and photos of the mother or father feeding the eaglets, and it’s just been very exciting,” Goldner said.

It will be weeks before the fledgling eagles will be able to take to the air like their parents, but the rare glimpse of them was enough for Goldner.

“It’s just a major deal for a wildlife photographer, a birder, anyone who loves nature to know that we have an environment that’s healthy enough for them to raise their young, and the fact that everyone’s showing respect and keeping their distance,” Goldner said.

To ensure the safety of the endangered eagles nesting here, forest preserve police are monitoring the site. Viewing of the nest is restricted to 500 yards to prevent the public from disturbing the protected site.

Goldner has some etiquette advice as well.

Officials believe the eagles will remain in the nest through the summer season, and it is possible they will return each year.