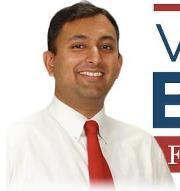 Vivek Bavda is undoubtedly the underdog in the 10th District Democratic race in the congressional primaries. But his experience is different than the other candidates. He is a lawyer, who previously was an intern for then-U.S. Senator Barack Obama. Bavda previously worked for Teach for America, and education is one of his primary platforms. So what can he offer the 10th District that others can’t?

Chicago Tonight spoke with Bavda to learn more. And don’t forget to watch Bavda alongside his three opponents for a special candidate forum on March 7, 2012, on Chicago Tonight at 7:00 pm. Excerpts:

1) What are the main issues in your district?

I worked on labor and real estate cases, but not criminal law. I take on cases in contract law, worked on wills, one sex discrimination case, which was very interesting because it was a woman harassing a man.

3) How does this contribute to your candidacy?

I know what it’s like to stand up for civil rights. I’m an advocate, I’m a leader. I’ll fight for the constituents in the 10th district, including their right to same sex marriage. As a lawyer, you learn a lot about how society is organized and how laws are drafted. I drafted an Illinois education bill. It makes me well-prepared to write legislation and have a good world view of what we need to do for policy.

4) Do you believe same-sex marriage is an issue in the 10th District?

When the general election comes, I’ll probably take some heat for it. It’s a principle stance, and I want to stand-up for my lesbian and gay brothers and sisters because everyone deserves to be recognized by a society, and it’s a civil right -- plain and simple.

5) You helped implement the Home Mortgage Disclosure Act at the Federal Reserve Bank of Chicago?

The Homeowner’s Disclosure Act basically is that you find out the details of the loans from the bank, and you can see if there are discrepancies or redlining. What I did was I would work on fiscal processing and making sure data came in. I have a long history of standing up for civil rights and making sure people are equally treated, and making sure people were judged based on the content of their character rather than illegal discrimination. Redlining is when certain areas are not lent to because they are minority communities.

6) You were a teacher with Teach for America and one of your major platforms is education?

Teach for America was the hardest thing I ever did and the best thing I ever did. The amazing thing is when you go to these schools, you see the potential in these kids and it makes you sad that you’re doing the best you can, but that a lot of this potential is going to be wasted, and that is deeply moving. I’ve always wanted to be involved in public policy from a young age; when you see that loss of potential, it gathers your strength to go out there for the kids. We need to set a much higher bar for our students. We need national standards. We need a growth model, so instead of looking at pass/fail with No Child Left Behind.

7) Does having previous teaching experience make you more able to do education reform?

In fact, that’s one of the main reasons I’m running. No Child Left Behind is going to be reauthorized and redrafted in the next two years. Frankly, I don’t think that many members of Congress have been teachers or education policy analysts. I think it’s lacking in Congress.

8) You helped start the Missouri Coalition for Lifesaving Cures which opposed a ban on stem cell research in Missouri – what motivated that?

A lot of things. I believe in science. I believe that there has been an attack on science by the Tea Party, that we should teach creationism along with evolution. Creationism is an attack on scientific thought, although I respect everyone’s beliefs. The notion that life begins at conception is a belief of religious dictate. The reality is stem cell doesn’t reach the pregnancy level. I see it as an attack on science. I want to work to make sure people who have juvenile diabetes, Parkinson’s…there is treatment but nothing that can make a huge difference. Meeting people with these conditions and learning it’s their best chance, it makes you want to fight for them and the middle class. It taught me how to build coalitions. We learned how to create advocacy for this specific issue.

9) If you get to the general election, how do you think you’d match up against incumbent Robert Dold?

I think the key difference between Bob Dold and I is that I think the government should be used to put people back to work. I believe in mainstream economics and that more federal spending is needed in the short term so unemployment goes down. Whereas, I think the Republicans, you’re just on your own philosophy. I think that’s a big contrast between him and me. I think that’s going to be the most important issue in the general election. That’s the key difference. My friends and neighbors, you hear about people being laid off.

10) You interned at Sen. Obama’s office before he became President – do you keep in touch?

To be quite frank, I’d love to be Barack Obama’s friend. I respect him immensely and support him for reelection. I supported him for Senate. I think he’s a great man, but I wouldn’t presume to think because I interned in his office, he’d anoint me as congressman. I made a solid impression and did good work, I think.

11) Do you think he remembers you?

I wouldn’t think so, I think he meets a lot of people. Maybe he does remember me, but my hunch would be is he meets very many people and I’m not the one he remembers.

12) How would you describe yourself in 3 words?