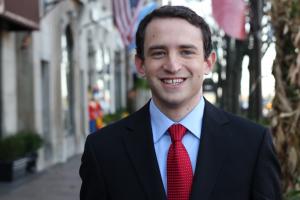 At 25 years old, Ilya Sheyman is just old enough to run for Congress. But he’s made a big impression in a short amount of time. He’s neck-and-neck with Brad Schneider in the 10th District polls, and has led the Democratic contenders in fundraising. He is even the first of the Democratic candidates to take his message to TV. But questions still arise: does he have the experience? Can he identify with the unemployed? Chicago Tonight spoke with Sheyman to learn more about his experience in anticipation of the primaries. And don’t forget to watch Sheyman alongside his three opponents for a special candidate forum on March 8, 2012, on Chicago Tonight at 7:00 pm. Excerpts:

1) At 25, you’re just old enough to run for Congress. What sets you apart?

In our race, I’m the only candidate with a track record of standing up and fighting for families in our district. I’ve organized for all public schools in Illinois at A Plus Illinois to improve funding of schools. And then I worked at Moveon.org as their national mobilization director in Waukegan, working on healthcare reform. I’ve worked directly with the people, running workshops to give them interview skills to get back to work. So I am the only candidate in this race with a track record of advocating for middle class families.

2) What are the main issues in your district?

Without a doubt, the first one is jobs: how do you put people back to work. Then restoring fairness to the tax system, and third, how do we recommit to investing in our communities in education, clean economy and infrastructure.

3) What experience do you have that makes you qualified?

I worked to build coalitions of stakeholders all around this area to improve our public schools – worked with teachers, labor leaders, and small business owners. I have experience organizing millions of people to affect concrete policy change in healthcare legislation. In Waukegan, where I live, I give workshops for interview skills to get people back to work. When I think about the role of a congressperson, it comes down to understanding what it is your community is looking for and going to Washington to represent them, and advocating for them on the key issues that matter to them.

4) It has been said that the majority of your district is looking for a more progressive candidate as opposed to Brad Schneider, who is considered more of a conservative Democrat.

I think at a time of such tremendous economic pain, it’s just not just the depth but how broadly felt the economic insecurity has been. I think people are looking for the solutions and people who are willing to stand up and fight for progressive values, saying the government has a role in people willing to help themselves. I think when talking about progressive, it’s a belief that in America, if you’re willing to work hard, play by the rules, and imagine a better life for the next generation, then the government should be on your side fighting for you. My family came here 20 years ago, but that promise of America is slipping away. The voters are looking to have that restored.

Yes, when we launched this campaign 11 months ago, we started grassroots. We had house parties and people came together to ask the tough questions to get a sense of who I am and share their priorities for the district. We get more than $5, $10, $15, $20—they knock on doors and have their own house parties. We now have 11,000 individual donors. It’s one of the largest donor bases for any congressional candidate in the county. What’s important about our fundraising is that it has grown steadily every single quarter. While some dry out as they tap their circle of friends, ours has kept growing.

6) How did you do that, at what is considered a young age?

I think people talk about age in their opponents as a negative. I think we’ve seen people excited that people see a fresh approach, committed to grassroots organizing. We have 500 volunteers and the same level of energy in our tremendous fundraising base. Yes, the other candidates probably started out with wealthier friends, but we built this from the ground up. And that’s what will help us win on March 20th and defeat Congressman Dold in November.

7) You’re in a slight lead [at the time of the interview] in the Democratic race; what’s your reaction?

I think the poll says two things: people have learned about the campaign and are excited about what we’re building here, and they’re excited to elect a progressive to Congress. It also reveals we have a lot of work to do over the next six weeks. We know it will go to who has the most grassroots support, and who will come out in a cold day in March. But it also says we have a lot of work to do to keep reaching those people and aren’t undecided because they’re weighing their options. They’re undecided because they’ve yet to hear from us. Our job is to have a direct conversation.

8) How do you anticipate earning respect in Congress?

The problem with Congress right now is that a vast majority of them are millionaires. They’re living in the 1 percent and don’t know what it’s like to be middle class. My life story is emblematic of what families across the district are going through. My dad started out delivering pizza across Chicago and eventually started two small districts. I was able to get Stafford loans to go to college. That’s the story of America, the stories of people who worked hard and with support of their community were able to provide a better life. It’s very similar, not identical, but similar to families where they come from, no matter what they look like. As an organizer, I have the ability to listen to the stories across the district and pull them together and rebuild the middle class. The reality is that age has not been a factor in this campaign.

9) On MSNBC’s Up with Chris Hayes, you mentioned your parents came to the U.S. two decades ago as Jewish refugees and provided a better life for you, but you feel that slipping away. Why is that?

The 10th congressional district is one of the most economically diverse in Illinois. We have the wealthy North Shore with 8 percent unemployment, compared with Waukegan at 13 percent, and North Chicago at 19 percent. It takes different forms in different parts of the district. It could be someone’s son or daughter who got back from college and doesn’t have a job, and their parents are forced to pay student loans. Others can’t pay their mortgage. This came out of the fact that we hear these stories every day. I think wherever you go, no matter who you talk to, someone is worse off than the previous one, whether we are willing to recommit ourselves to the idea that government has a roll to play in the government helping people.

10) If you get to the general election, how do you think you’d match up against incumbent Robert Dold?

The advantage we have is we launched the campaign back in March on the same methods we have now, and in September, October, November. The core premise of the American dream is worth fighting for. We present a clear contrast to Congressman Dold. He voted to end Medicare and replace with a private voucher. He went to my hometown of Buffalo Grove and said we should end Social Security. And for 12 months, he hasn’t entered a jobs bill. His idea is that government’s job is to get out of your way and you should make it on your own. In America, your government should be advocating for you and fighting for you. I think we’re positioned to win this general election. All across the district, there is hunger.

11) How would you describe yourself in three words?