Courtroom sketch artist Tom Gianni branches out into painting a three-panel fantasy mural for a suburban library. Elizabeth Brackett has the story.

He got the idea about a decade ago when his daughter, Anna, wanted to know where the family car was. Gianni told his daughter the car was broken and was in the shop, and that a man was fixing it. Anna asked, “What man?” And Gianni replied: “A mechanic, Anna.”

A light bulb went off in his head, and the idea for a superhero was born. 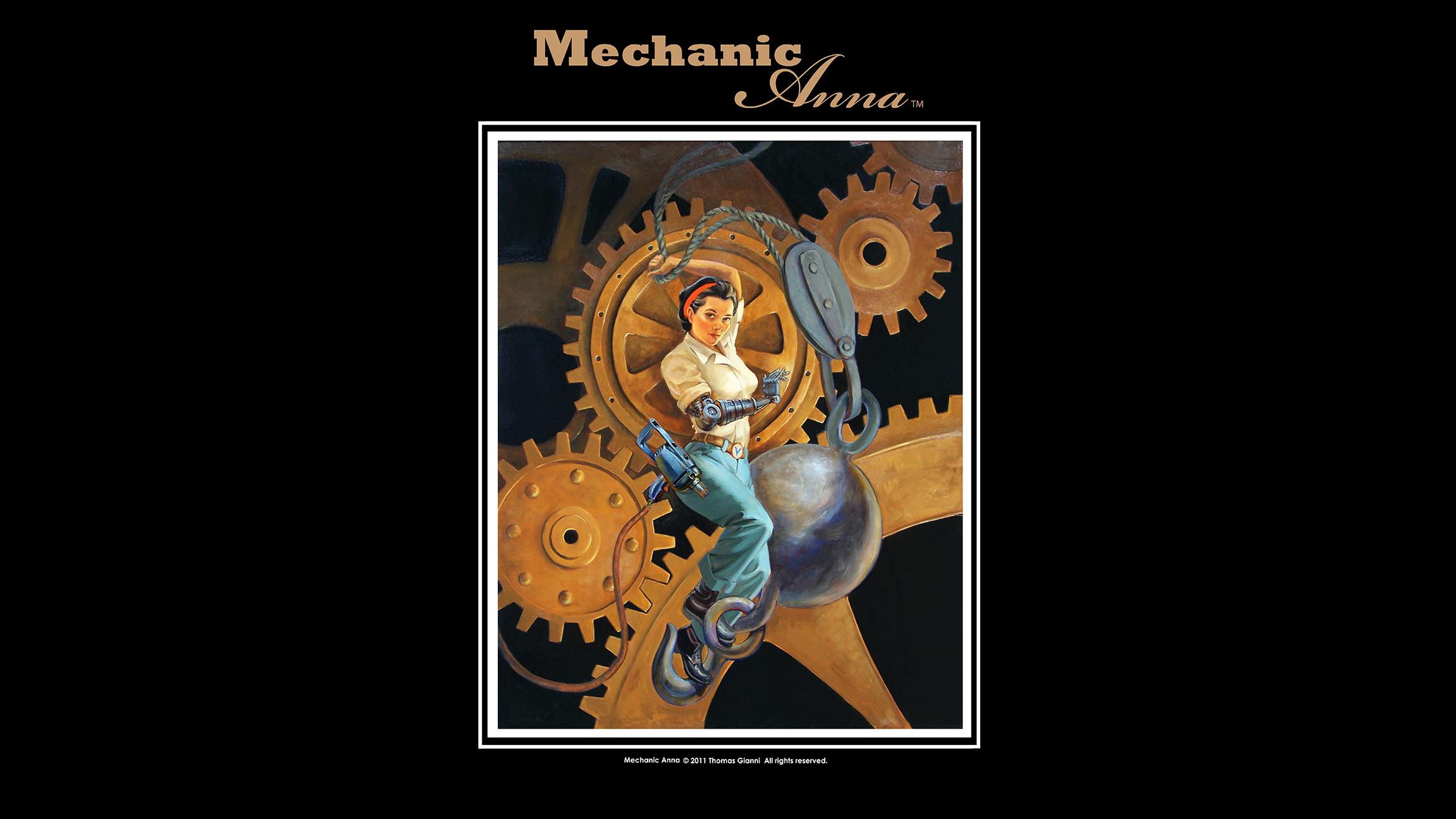 “I decided Mechanic Anna would be like Rosie the Riveter,” said Gianni. “It would take place in the 1940s during World War II and she would be fighting everyone’s favorite villain: the Nazis.”

As Gianni developed the character of Mechanic Anna, he decided she would be Italian and would work in the shipyards of Brooklyn, New York, as a machinist and a welder.

“The tagline for her would be: working woman, mechanized female, reluctant warrior,” said Gianni.

Her full name is Anna Sophia Scarlatti. The iconic design where she is posing in front of gears shows her bionic, or mechanical, arm.

Gianni says the story behind Anna’s mechanical arm is that she lost her arm in a shipyard accident.

“The government gave her this prototype of a mechanical arm that they used for soldiers who lost limbs in battle,” said Gianni. “The arm is big and clunky, and makes her handicapped in a way, but it’s also very powerful. And she can do things that normal people can’t do, like pick up a giant anchor and throw it at Nazis invading the East Coast.”

Gianni also says it was important for Mechanic Anna to be relatable and down to earth.

“Lots of heroes and heroines are too cool and too in control,” said Gianni. “For me, it doesn’t make for an interesting story because there is no element of danger. If you care about a character and there’s a sense of danger, you really get involved. She’s very human and is very vulnerable.”

“She is a working class woman. She is every woman. She has problems that every person has,” said Gianni. “Her clunky, mechanical arm makes it hard for her to get dates, and at times, things break down and the arm doesn’t work.”

Gianni says although the idea for the graphic novel was brewing for several years, he completed the iconic painting a few months ago and has since received a great response to the idea at comic conventions.

Gianni says the story is written and he is in the process of illustrating it.

Another interesting tidbit: Gianni’s wife posed for the image of Mechanic Anna.

“She has my wife’s face basically, but my wife has blonde hair and I gave my character black hair,” said Gianni.

Gianni says he has a real passion for World War II history, which is a huge part of the graphic novel’s plot.

“The Nazi thing happens as a result of it being World War II,” said Gianni. “Anna is working in the shipyards because of the shortage of men, like Rosie the Riveter.”

Mechanic Anna is geared towards an adult audience and is still in development. Gianni hopes to have it ready by May or June. He hasn’t found a publisher for the graphic novel yet, and is considering an e-book or putting it online. But, somehow, he says he’s going to make it happen.

“I’m doing it for myself. When you do things for yourself and follow your bliss, you find your niche in life,” said Gianni.