Chicago cab driver and author Dmitry Samarov has seen more of the city than most people see in a lifetime. He joins us on Chicago Tonight at 7:00 pm to talk about his new book, Hack: Stories from a Chicago Cab. Read the following excerpt from the book. 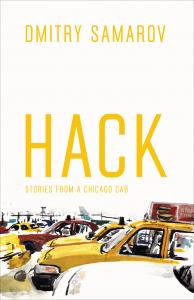 A raised hand generates an almost irresistible magnetic pull on a taxi driver. After some years, my mind is trained to seek its abstract form in light poles, reflections in parked cars, windblown tree branches, and, on a slow night, just about any likely shape into that desired signal—the symbol of time not spent in vain. Depending on the hour of day or night, what follows that hopeful gesture will vary from absolute silence to aggressive and often unwanted camaraderie, but in almost every case it begins with some sort of greeting.

On afternoons in the Loop, terse one- or two-phrase directives abound. Words like Ogilvie, O’Hare, Wrigley, Lakeview, Bucktown, Midway, Michigan and Randolph, Ontario, and Chicago, on and on. Like pushing the elevator button, they name their wish with no need for further communication. To expect more than an occasional thank you for the fare displayed on the meter and the sometime addition of a pre-calculated tip—worked out from countless identical trips—would be wishful thinking during downtown afternoons. There is a nonverbal contract made between passenger and driver to acknowledge that these transactions are basic and unremarkable, unworthy of excess comment or thought.

With the approach of twilight, tentative signals indicate that work mode is being shed and the thirst for social contact can be detected. Between calls and texts, the passenger might ask about how the day’s going, usually without expectation or need of any substantive response. Like exercise done at the gyms so many of them attend, this verbal stretch is meaningless except to keep limber in preparation for the heavier lifting that may lie ahead.

In early evening, couples wait at the curb, peering furtively at every passing taxi, sometimes raising their hands after the car has gone by, prompting slammed brakes from more aggressive or desperate drivers. A man wears his button-down untucked over nice jeans, his getup completed more often than not with flip-fl ops; his date is dressed to the nines from the ’do to the makeup to the little black dress to the heels that make her teeter long before her first cocktail. They’ll exchange pleasantries in gratitude for the lift. He’ll talk to the driver to show her he’s got that common touch; she’ll talk to the driver if she’s bored with her guy or nervous. Once in a great while, there will be a conversation that reflects their good spirits, one that will serve to start off their date in a benevolent spirit toward all and sundry.

Packs of men pile in through the night. They’ll start with: Boss, Chief, Buddy, Dude, Man, Bro, Hey, and when they think they’re being funny, Sir. They’ve had a few or more by now, so they break the ice instinctively and without prompting. They’ll ask how things have been, as if with a long-lost friend, and will even feign interest at the answer. They’ll ask where the ladies are, then go back to recapping the “talent” encountered up to that moment. There’s the possibility of inclusion in their club should I want in. A story or two about “those crazy bitches” could well qualify me for lifetime membership.

As taverns empty, the greeting runs the gamut from drunken mirth to stone silence. Tipsy chicks continue flirting in the cab as if still sipping appletinis. They laugh too loudly, say too much, and create more intimacy than there should be with a complete stranger. Some recount their evening if there’s no one to dial up at this late hour, needing a confidant to vent to. They’ll ask for advice or empathy with no regard for their listener’s qualifications or character. Their need to ease their burden trumps the caution they might’ve displayed before the sun set. Last are the ones who were over-served and know it; with luck their address can be extracted without too much hassle, and they can be left to drift off into that end-of-the-night-ride-home fugue state. Upon arrival, the lights have to be raised and the drowsing reveler must be addressed in a loud voice: “HEY, BUDDY, PAL, CHIEF, TIME TO WAKE UP, YOU’RE HOME. TIME TO SAY

If cars are the fish, then city buses are the whales in the water of the thoroughfare. Slow, lumbering, and able to go where and when they want, they put the rest of us in our place simply by their girth. During rush hour, they mass in the right lane to form an impenetrable wall; God help the lowly sedan hoping to make a right turn. When these behemoths are ready to stir, they’ll take up two to three lanes to make their move, causing an absolute stop behind them while the road ahead is all clear. The worst offenders are the accordion buses, which hamper passage like nothing else on wheels. A few weeks ago, one overshot its stop, then turned its front half toward the curb to block both lanes while disgorging its contents. When it eventually pulled forward, I went around and slammed on the brakes, making him halt, to communicate my displeasure. The irate bus driver threw it into park at the next red light, ran up to my passenger-side window screaming bloody murder, turning an unflattering crimson shade that made me fear for his health. The gist of the rant was that he’d had it with cabdrivers getting in his way and flouting the rules of the road; laughable considering the mismatch in size and potential for damage and distress between the two vehicles. All the same, any opportunity to cause a CTA bus a bit of annoyance can’t be passed over by any self-respecting taxi driver.

Lower on the food chain, but presenting their own special problems, are the cyclists. The regular riders downtown often seem hellbent to squeeze through any available inch between vehicles while simultaneously giving only cursory attention to streetlights and stop signs. Bike couriers, of course, elevate this dance to an art form. A while back, one of them wrote a memoir comparing their vocation to that of ninjas, medieval knights, and other mythical warriors; nothing like self-delusion to get one through the drudgeries of the day. As a lowly fellow servant to the moneyed class, hearing such claptrap mixes funny with sad. Last week one of them yelled, “YOU’RE A DOUCHE!” as she took exception to a U-turn I’d made, which, coming as it did within thirty feet of her precious fixed-gear steed, apparently presented some grievous threat. Pulling even and telling her that it takes one to know one got a half-smile out of her; we hopscotched back and forth for at least two miles down Damen, with more chatter and gesticulating. If it wasn’t quite understanding, it was at least détente.

Pedestrians are the frailest yet most dangerous creatures of the road; the gentlest nudge with the bumper may mean the end of one’s workday, not to mention the time-consuming cleanup. At times it takes heroic self-control not to mow down a dozen or two just on general principle. When the quitting bell rings, they swarm the sidewalks, often spilling over into the roadways. They cast dirty looks at motorists who deign to remind them to retreat back to their part of the street, then test brakes by not breaking pace no matter the shade of the traffic signal. Some fancy themselves amateur crossing guards, windmilling their arms at moments of their choosing, further enraging many a veteran wheelman.

These little run-ins are an ideal way to relieve the frustrations of the day; we can sense when the driver, the cyclist, or the pedestrian is poised on that precipice—ready to explode at the slightest provocation. After a time, it can become a sort of game to set them off, if not a source of pride at least; a method to soothe one’s own rapidly fraying nerves.

In addition to being an author and cab driver, Samarov is also an artist. See some of his work in the image gallery below. For more on the book, blog and author, please visit the links below.