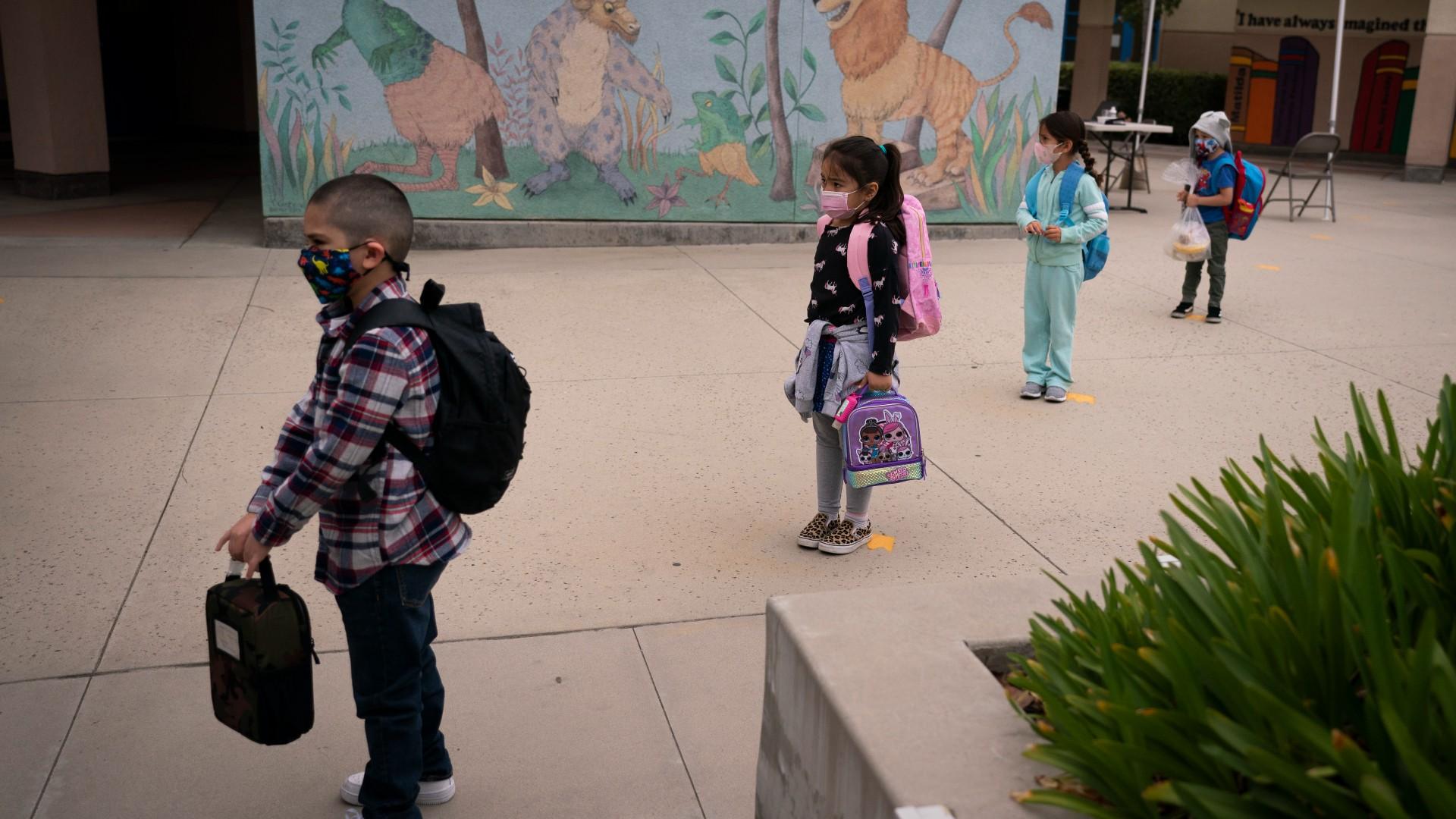 Socially distanced kindergarten students wait for their parents to pick them up on the first day of in-person learning at Maurice Sendak Elementary School on April 13, 2021, in Los Angeles. Vaccination rates for U.S. kindergarteners in 2022 saw a significant drop for the second year in a row, according to new data released Thursday, Jan. 12, 2023, and worried federal officials are launching a new campaign to try to help bring them back up. (AP Photo / Jae C. Hong, File)

NEW YORK (AP) — Vaccination rates for U.S. kindergarteners dropped again last year, and federal officials are starting a new campaign to try to bring them up.

Usually, 94% to 95% of kindergarteners are vaccinated against measles, tetanus and certain other diseases. The vaccination rates dropped below 94% in the 2020-2021 school year, during the first year of the COVID-19 pandemic.

A Centers for Disease Control and Prevention study released Thursday found rates dropped again in the 2021-2022 school year, to about 93%.

The pandemic disrupted vaccinations and other routine health care for children, and also taxed the ability of school administrators and nurses to track which children weren’t up-to-date on shots. CDC officials said decreased confidence in vaccines is another likely contributor.

“I think it’s a combination of all those things,” said Dr. Georgina Peacock, director of CDC’s immunization division.

Health officials focus on kindergarten because it’s when most children enter school systems. Public schools typically require vaccinations as a condition of attendance, though some exemptions are allowed.

Such exemptions were up slightly last school year, but the CDC’s Shannon Stokley said they are not the main driver of the decrease. Rather, more schools relaxed their policies to allow enrollment while giving families a grace period to get shots, she said.

The new numbers suggest that as many as 275,000 kindergartners lack full vaccine protection.

Falling vaccination rates open the door to outbreaks of diseases once thought to be in the rearview mirror, experts say. They point to a case of paralytic polio reported last year in New York, and to recent measles surges in Minnesota and Ohio.

Other physicians have told him that more parents are being selective about which vaccines to give their kids. CDC data reflected that: The chickenpox vaccination rate fell more sharply than the rate for shots against measles, mumps and rubella.

This week, the CDC launched a campaign called “Let’s RISE” — an acronym for Routine Immunizations on Schedule for Everyone. It includes new educational materials to help doctors talk to families about vaccinations, as well as information for families who have questions about the shots.

Building trust in vaccinations “is something that has to happen at the local and community level,” Peacock said.

Thursday’s CDC study was based on public school kindergarten vaccination reports from 49 states, and reporting on private schools from 48 states. Montana did not report data.

Rates vary across the country. CDC officials noted significant increases in a few states, including Hawaii, Maine, Maryland and Wyoming. But most states saw declines, with the largest drops in Mississippi, Georgia and Wisconsin.

A second CDC report on Thursday found overall vaccination rates among younger children remained high and stable, although there were declines among kids who were poor and lived in rural areas. The report was based on a 2021 national telephone survey of parents of children who were about 2 years old.

Why the difference? CDC officials said it appears doctors and parents made sure younger and more vulnerable children got initial vaccine protection during the pandemic, but there may have been a drop-off in getting booster doses and additional shots as kids got older.