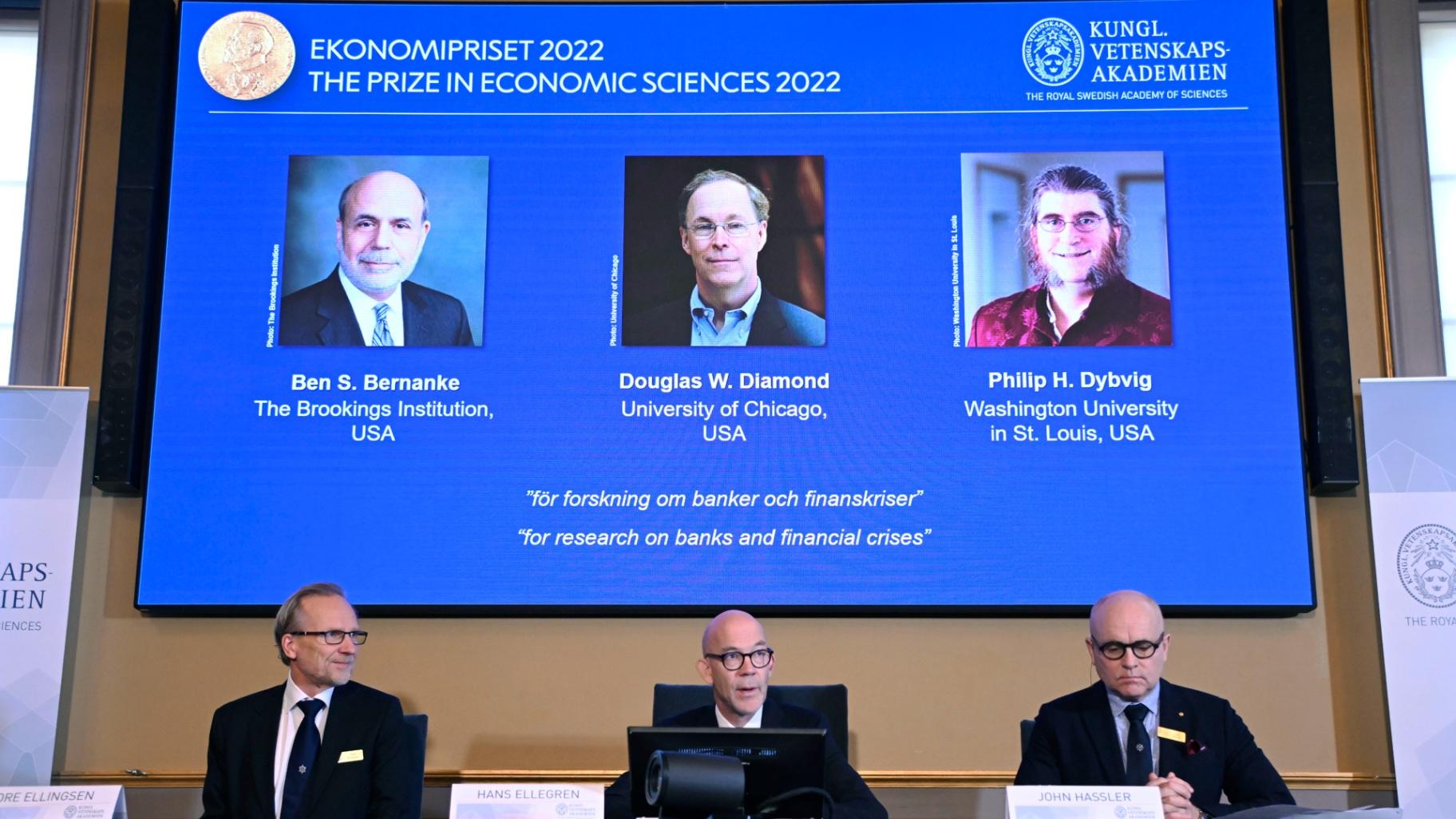 STOCKHOLM (AP) — Former U.S. Federal Reserve Chair Ben Bernanke, who put his academic expertise on the Great Depression to work reviving the American economy after the 2007-2008 financial crisis, won the Nobel Prize in economic sciences along with two other U.S.-based economists for their research into bank failures.

The Nobel panel at the Royal Swedish Academy of Sciences recognized Bernanke, Douglas W. Diamond and Philip Dybvig on Monday for research that shows “why avoiding bank collapses is vital.”

Their findings in the early 1980s laid the foundations for regulating financial markets, the panel said.

“Financial crises and depressions are kind of the worst thing that can happen to the economy,” said John Hassler of the Committee for the Prize in Economic Sciences. “We need to have an understanding of the mechanism behind those and what to do about it. And the laureates this year provide that.”

Bernanke, 68, examined the Great Depression of the 1930s when he was a professor at Stanford University, showing the danger of bank runs — when panicked people withdraw their savings — and how bank collapses led to widespread economic devastation. He was Fed chair from early 2006 to early 2014 and is now with the Brookings Institution in Washington.

Before Bernanke, economists saw bank failures as a consequence, not a cause, of economic downturns.

Diamond, 68, based at the University of Chicago, and Dybvig, 67, who is at Washington University in St. Louis, showed how government guarantees on deposits can prevent a spiraling of financial crises.

“Probably the most gratifying thing for us is that policymakers actually seem to understand it, and the insights that we had, which are pretty simple, could be used in the actual financial crisis,” Diamond told The Associated Press in Chicago. He added that he was “very happy” and “quite surprised” to get the call.

When it comes to the global economic turmoil created by the COVID-19 pandemic and Russia’s war in Ukraine, the financial system is “much, much less vulnerable” to crises because of memories of the 2000s collapse and improved regulation, Diamond said in a call with the Nobel panel.

The trio’s research took on real-world significance when investors sent the financial system into a panic during fall 2008, prompting the longest and most painful recession since the 1930s.

Bernanke, then head of the Fed, teamed up with the U.S. Treasury Department to prop up major banks and ease a shortage of credit, the lifeblood of the economy.

He slashed short-term interest rates to zero, directed the Fed’s purchases of Treasury and mortgage investments and set up unprecedented lending programs. Collectively, those steps calmed investors and fortified big banks — and were credited with avoiding another depression.

The Fed also pushed long-term interest rates to historic lows, which led to fierce criticism of Bernanke, particularly from some 2012 Republican presidential candidates who said the Fed was hurting the value of the dollar and running the risk of igniting inflation later.

And Bernanke’s unprecedented activism at the Fed established a precedent for the central bank to respond with speed and force to economic shocks.

When COVID-19 slammed the U.S. economy in early 2020, the Fed, under Chair Jerome Powell, quickly cut short-term interest rates back to zero and pumped money into the financial system. The aggressive intervention — along with massive government spending — quickly ended the downturn and triggered a powerful economic recovery.

But the quick comeback also came at a cost: Inflation began rising rapidly last year and now is close to 40-year highs, forcing the Fed to reverse course and raise rates to cool the economy. Central banks around the world are taking similar steps as inflation erodes consumers’ spending power.

In a groundbreaking 1983 paper, Bernanke explored the role of bank failures in deepening and lengthening the Great Depression of the 1930s.

Before that, economists cast blame on the Fed for not printing enough money to support the economy as it sank. Bernanke agreed but found that the shortage of money could not explain why the depression was so devastating and lasted so long.

The problem, he found, was the collapse of the banking system. Panicked savers pulled money out of rickety banks, which then could not make the loans that kept the economy growing.

“The result,’’ the Nobel committee wrote, “was the worst global recession in modern history.’’

“Ben Bernanke’s 1983 paper was startlingly original and of enduring importance -- not in explaining how the Great Depression started, but in explaining why it lasted so long,’’ said former Fed Vice Chair Alan Blinder, an economist at Princeton University. “That insight has affected economists’ thinking ever since.’’

Diamond and Dybvig showed that banks play a crucial role in resolving a nettlesome financial problem: Savers want instant access to their money, but businesses need time to see their ventures generate profits before they can repay loans in full. In a 1983 paper, Diamond and Dybvig explored the banks’ key role as intermediary between savers and borrowers.

They also found that banks are vulnerable: If savers fear their bank is in danger of failing, they will pull their money out, forcing the bank to call in loans to raise money to cover withdrawals. To stop bank runs -- and their economic fallout -- governments can insure deposits and act as a lender of last resort to banks.

The insight: “If you could prevent the panic, then the banks would be fine,’’ said Simon Johnson, an economist at the Massachusetts Institute of Technology who has written about the financial crisis. “That’s a very, very powerful idea that underpins how people think about financial stability.’’

Diamond also established, in a 1984 paper, that banks play a crucial role in evaluating borrowers’ creditworthiness and making sure that loans go to worthy projects and get repaid.

The economics award capped a week of Nobel Prize announcements in medicine, physics, chemistry, literature and peace. They carry a cash award of 10 million Swedish kronor (nearly $900,000) and will be handed out on Dec. 10.

Unlike the other prizes, the economics award wasn’t established in Alfred Nobel’s will of 1895 but by the Swedish central bank in his memory. The first winner was selected in 1969.