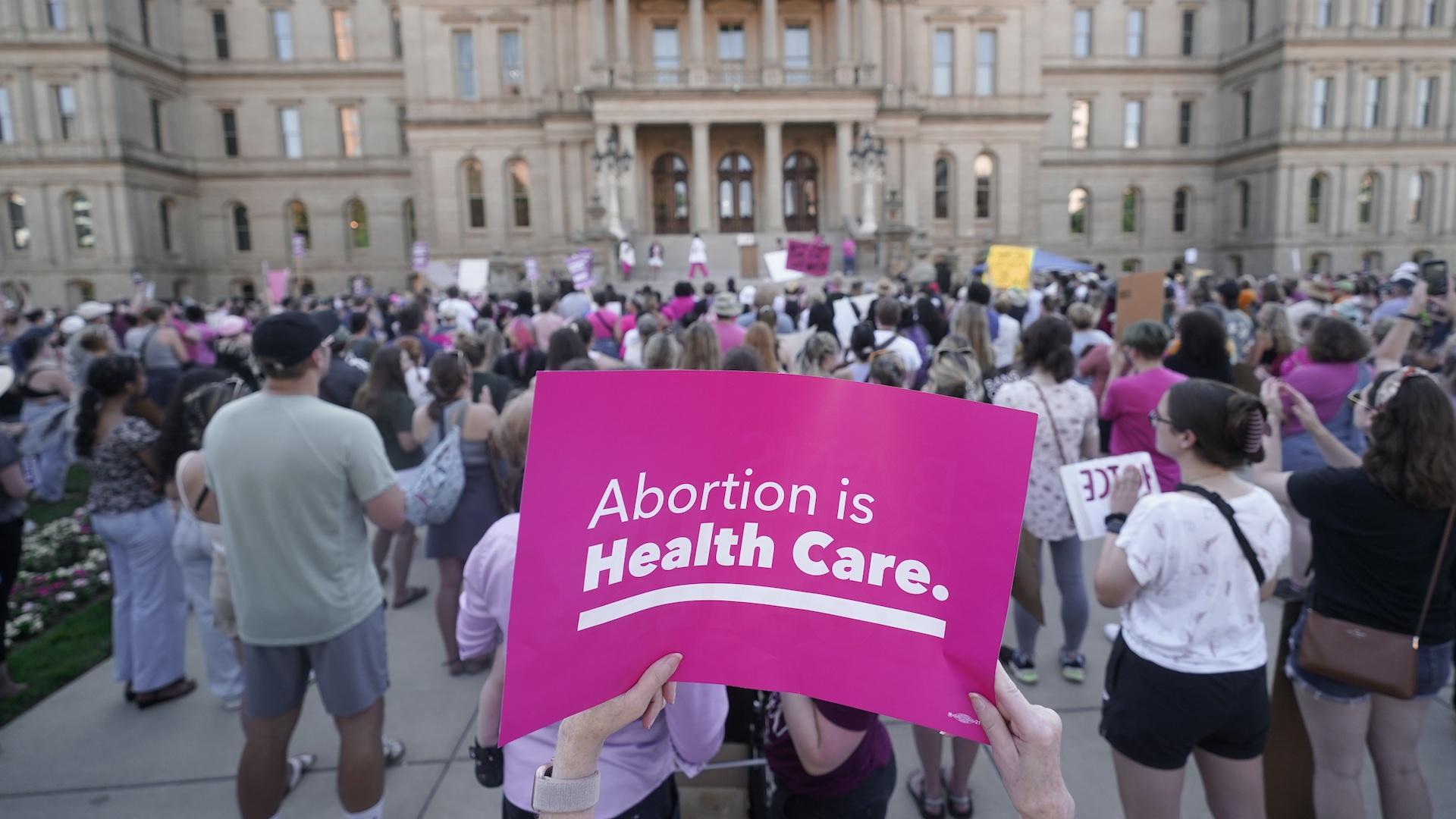 Surrounded by states with abortion bans that took effect after Roe v. Wade fell, Illinois is one of the few places where the procedure remains legal in the Midwest.

Abortion-rights supporters are worried that might not last. Their concern is shared in at least a half-dozen states, and this year it's not just about state legislatures. In Illinois, Democrats hold a supermajority, and the governor, a Democrat, is expected to win reelection.

Instead, Republicans could be on the verge of winning control of the Illinois Supreme Court, where Democrats currently hold a 4-3 majority. Two seats are up for election in November, prompting groups that have normally set their sights on other offices to concentrate attention and money on the judicial campaigns.

“Those are the only things we're focused on, because whoever wins control of the court will decide whether abortion remains legal in Illinois," said Terry Cosgrove, president and CEO of Personal PAC, an abortion rights group that has endorsed the two Democrats running for the high court.

The same scene is playing out in other states with contentious high court races on the ballot this year. After the U.S. Supreme Court struck down Roe, state judicial races have become even more important for Democratic groups working to protect abortion rights.

“It’s increasingly clear that the way access is playing out is at the state level, which puts the role of the court in stark relief," said Sarah Standiford, national campaigns director for Planned Parenthood Action Fund.

The groups' involvement in states such as Illinois, Michigan and Ohio is a preview of how high-stakes normally sleepy court races are becoming.

In Illinois, Appellate Court Justice Mary Kay O'Brien is raising concerns about abortion rights as she runs against Republican Justice Michael Burke in a redrawn district for a seat currently held by a retiring Democratic justice.

“Now with Roe v. Wade being overturned, women’s freedom to choose in Illinois is at risk,” a recently launched ad for O’Brien says.

Meanwhile, the race for a court seat currently held by a Republican and covering counties northwest of Chicago pits Republican former Sheriff Mark Curran against Democrat Liz Rochford, a judge. Curran touted his opposition to abortion rights when he ran unsuccessfully for Senate two years ago.

About $97 million was spent on state supreme court elections during the 2019-2020 election cycle, according to the Brennan Center for Justice at New York University’s law school. Spending records could be shattered this year in states targeted by the right and left.

One group is Alliance for Justice Action Campaign, which supports abortion access. It plans to reach voters in Michigan, North Carolina and Ohio.

“We were already planning to be involved in these states, but Dobbs has heightened our interest and heightened our sense of purpose and sense of mission on it," said Jake Faleschini, the group's legal director for state courts, referring to the U.S. Supreme Court decision.

The races' importance was underscored recently when the Michigan Supreme Court, where Democratic appointees hold a slim majority, overruled a decision by a state certification board and allowed a constitutional amendment ensuring abortion rights on the November ballot.

While Michigan's races are officially nonpartisan, the state's political parties nominate candidates. Democratic-backed Justice Richard Bernstein, who voted with the court's majority to keep the abortion rights amendment on the ballot, is seeking reelection against Republican Paul Hudson. Democratic Rep. Kyra Bolden hopes to unseat incumbent Republican Justice Brian Zahra, who voted against allowing the initiative on the ballot.

“Folks here in Michigan are angry about the Roe decision. And I think that when they’re looking for places to exercise their freedom to vote, they’re going to look to the Supreme Court,” state Democratic Party Chair Lavora Barnes said.

Still, the candidates insist they aren’t politicians and the role of the court is to be nonpartisan.

Zahra, who has served since 2011, described a justice’s role as saying “what the law is and not what they think it ought to be.”

Abortion rights groups also are closely watching Kansas, where six of the seven Supreme Court justices face a statewide yes-or-no vote to stay on the bench for another six years.

Two of the six were in the 6-1 majority that in 2019 declared access to abortion a “fundamental” right under the state Constitution, while another three were appointed by Democratic Gov. Laura Kelly. The sixth justice on the ballot is considered the state’s most conservative member.

Democrats, moderate Republicans and others fear a quiet effort to remove justices after Kansas voters in August decisively rejected a proposed amendment that would have declared the state Constitution does not recognize a right to abortion. If it had passed, the Republican-controlled Legislature could have greatly restricted or banned the procedure.

The state supreme court races that abortion rights supporters say they are most concerned with are ones Republicans already have been targeting, but for other issues.

The Republican State Leadership Committee said it plans to spend more than $5 million — a record amount for the group — on supreme court races in Illinois, Michigan, North Carolina and Ohio. Spokesman Andrew Romeo said the group's focus is on redistricting.

In North Carolina, where abortion remains legal and Democrats hold a 4-3 majority on the high court, Republicans are trying to flip two seats.

Trey Allen, the Republican hoping to unseat Democratic Justice Sam Ervin IV — whose grandfather presided over the Watergate hearings in the U.S. Senate — has accused the court of becoming too partisan.

“We need justices who are going to follow the law in every case and leave their politics aside," he said during a recent forum.

Abortion also is likely to play a major role in a technically nonpartisan Kentucky Supreme Court race this fall between longtime Republican state Rep. Joe Fischer and the incumbent, Michelle Keller. Republicans are pushing hard for Fischer, who sponsored the state’s “trigger law” ending abortion that took effect after Dobbs and also is behind a proposed anti-abortion constitutional amendment on the ballot.

In Ohio, Republicans are trying to keep their 4-3 majority on the court, with two GOP justices defending their seats. A third race pits two sitting justices — a Republican and a Democrat — against each other for chief justice.

Ohio’s court is likely to be another battleground over abortion after a county judge temporarily blocked a ban that took effect after the U.S. Supreme Court's ruling. Rhiannon Carnes, co-founder and co-executive director of Ohio Women’s Alliance Action Fund, said her group has been calling and texting voters, and will be sending direct mail about the court races.

“There has just been so much talk about the federal Supreme Court," she said. "We have to do more in the states about the influence and power of our state supreme court."