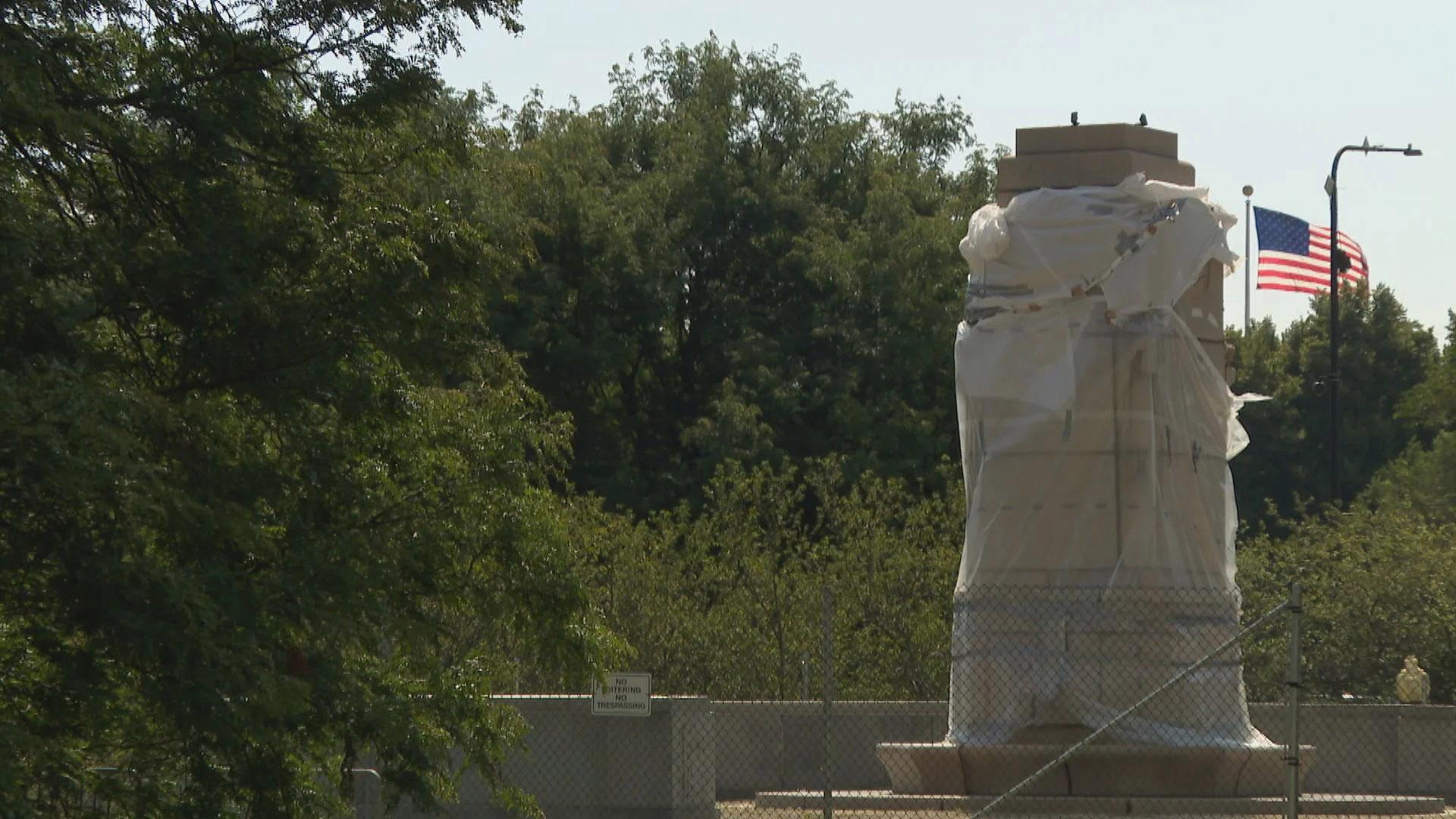 An empty pedestal in Grant Park in July 2020, where a statue of Christopher Columbus stood recently. (WTTW News)

Mayor Lori Lightfoot vowed two years ago Friday to confront the “the hard truths of Chicago’s racial history” by using the city’s public spaces to memorialize the “city’s true and complete history.”

Fueled by the social justice protests and unrest that erupted after the police murder of George Floyd, activists demanded that the city remove three statues of Christopher Columbus, which they said celebrated white supremacy and the slaughter of indigenous Americans.

After the statue of the Italian explorer in Grant Park became a flashpoint for protests against racism and police brutality, Lightfoot ordered all three Columbus monuments removed — temporarily, she said — and launched a “racial healing and historical reckoning project.”

Lightfoot said the Chicago Monuments Commission would “provide a vehicle to address the hard truths of Chicago’s racial history” and detail how the city could “memorialize Chicago’s true and complete history.”

By February 2021, the commission had finished reviewing Chicago’s more than 500 public monuments and issued an interim report that flagged 41 monuments as problematic for a variety of reasons, including the statues of four presidents: George Washington, Abraham Lincoln, Ulysses S. Grant and William McKinley.

The report from the commission, including its recommendations, has yet to be released to the public, and representatives of the mayor and the Chicago Department of Cultural Affairs and Special Events, known as DCASE, declined to comment to WTTW News.

Five members of the commission, including former DCASE Commissioner Mark Kelly, either declined to respond to questions from WTTW News, did not respond or referred questions to city officials.

Commission Co-Chair Bonnie McDonald, the president of Landmarks Illinois, told WTTW News in an email that members of the commission, including its leadership “continue to wait for further information from DCASE about when the draft recommendations report will be released.”

“I am certain that the committee shares my desire to see the draft report as soon as possible to complete this next step in this important process and to continue the public dialogue,” McDonald said.

A quarter of the problematic monuments include images of Native Americans, including “Indians (The Bowman and the Spearman),” which stands at the Michigan Avenue entrance of Grant Park. The commission’s description notes that the “sculptures have been criticized for their romanticized and reductive images of American Indians.”

One-fifth of the monuments flagged by the commission are dedicated to white explorers, most frequently French missionary Jacques Marquette and the Quebec-born cartographer Louis Jolliet, who were the first Europeans to explore and document the northern portion of the Mississippi.

Some of the monuments listed as problematic have long been in storage because of objections, including a bronze sculpture of the Fort Dearborn Massacre, which the commission describes as “conceived in a sensationalist, luridly violent mode, the sculpture was long criticized by American Indian activists and was removed from public view in 1997.”

Chicago has few public monuments dedicated to women or people of color, and Lightfoot has said that imbalance should be corrected.

In March, Lightfoot said the city’s three Columbus statues would be returned to their still-empty pedestals. A safety plan would be needed to protect the statue in Grant Park, Lightfoot told reporters.

The city is facing two lawsuits over the removal of the Columbus statute. Chicago’s Joint Civic Committee of Italian Americans wants a judge to rule that the removal of the statue in Little Italy’s Arrigo Park violated a decades-old agreement to display it in perpetuity.

In addition, a former attorney for the Chicago Park District sued the city after he said Lightfoot berated him using obscene language and blocked a deal the Park District made to allow a Columbus statue to be displayed in a parade.