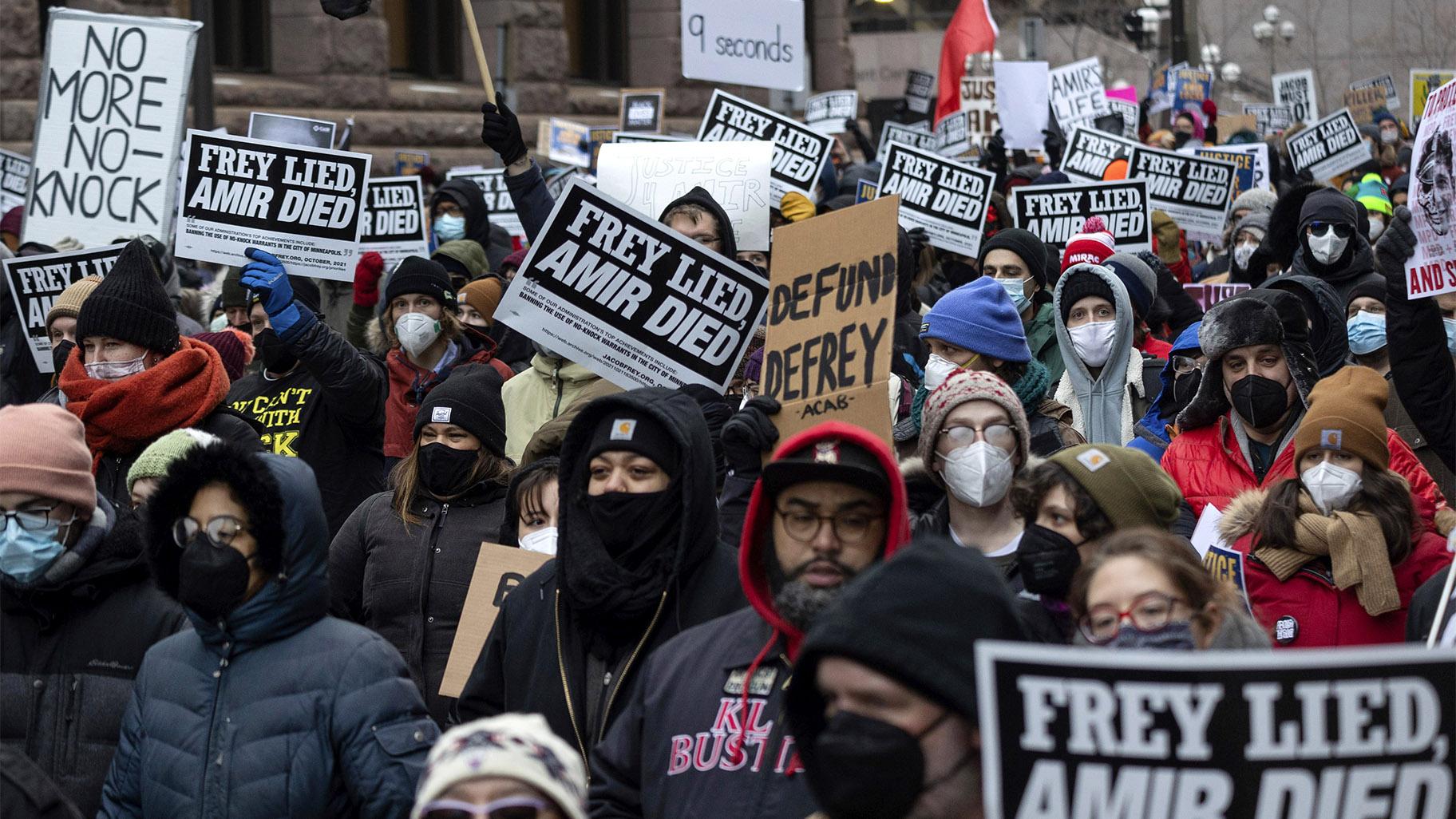 Locke, 22, who was Black, was staying on a couch in his cousin’s apartment when authorities entered it on Feb. 2 without knocking as part of an investigation into a homicide in neighboring St. Paul.

Attorney General Keith Ellison and Hennepin County Attorney Michael Freeman, whose offices reviewed the case, said that after reviewing all of the evidence, they determined that Officer Mark Hanneman was justified in firing his weapon. They said at a news conference that Hanneman’s body camera footage shows that Locke pointed his gun at the officer.

Locke’s mother, Karen Wells, said at a separate news conference that she was “disgusted” by the decision. Appearing in New York with attorney Ben Crump and civil rights leader the Rev. Al Sharpton, she vowed to keep up pressure on Minneapolis city leaders. She said Hanneman “executed my baby boy” and warned him:

“This is not over. You may have been found not guilty, but in the eyes of me, being the mother who I am, you are guilty,” Wells said. “And I’m not going to give up. Continue to have your restless nights, because I know you do. ... Because the spirit of my baby is going to haunt you for the rest of your life.”

Locke, who was not named in the warrant, was shot seconds after he displayed a gun. The body camera footage shows that Locke was holding a gun before he was shot.

Ellison and Freeman said Locke might never have been shot if not for the no-knock warrant. But they said there was insufficient evidence to prove beyond a reasonable doubt that Hanneman violated any of the legal elements of the state statute governing when police can use deadly force.

“It would be unethical for us to file charges in a case in which we know that we will not able to prevail because the law does not support the charges,” Ellison said.

Locke’s death came as three former Minneapolis police officers were on trial in federal court in St. Paul in George Floyd’s killing. It sparked protests and a reexamination of no-knock search warrants. Minneapolis Mayor Jacob Frey announced an immediate moratorium on such warrants, and on Tuesday, he formalized a new policy that will take effect Friday requiring officers to knock and wait before entering a residence. Some lawmakers also have been pushing for a statewide ban on no-knock warrants, except in rare circumstances.

Locke’s family was angry that police initially described him as a suspect, which police later said was a mistake.

“Amir was not a suspect. Our investigation found no evidence that he had any role in the homicide investigation that brought the police to his door at 6:48 on Feb. 2,” Ellison said. “Amir was a victim. He never should have been called a suspect.”

In their applications for search warrants of the Minneapolis apartment and other locations, authorities said a no-knock warrant was necessary to protect the public and officers as they looked for guns, drugs and clothing worn by people suspected in a violent killing. Authorities asked that officers be allowed to conduct the search without knocking, and outside the hours of 7 a.m. and 8 p.m., because the suspects being sought in the Jan. 10 killing of Otis Elder had a history of violence.

Locke was killed seconds after the SWAT team entered the apartment where his family said he was staying. Body camera video shows an officer using a key to unlock the door and enter, followed by at least four officers in uniform and protective vests, time-stamped at about 6:48 a.m. As they enter, they repeatedly shout, “Police, search warrant!” They also shout “Hands!” and “Get on the ground!”

The video shows an officer kicking a sectional sofa, and Locke is seen wrapped in a comforter, holding a pistol. Three shots are heard and the video ends.

Ellison and Freeman said they had a long conversation with Locke’s parents on Wednesday before they announced that they wouldn’t file charges.

Sharpton said at the news conference with Wells and Crump that they will demand that the U.S. Justice Department review the case.

‘This is not over. The state made a decision, but the state will not close this case. We will fight with this family to get federal investigation on this case,” Sharpton said.

Crump faulted police for creating a life-or-death situation, and said gun rights groups should join with the family in demanding an end to no-knock warrants. He connected Locke’s death with that of Breonna Taylor, who was killed in a botched police raid in Kentucky in 2020 in which her boyfriend shot at officers first as they broke into her apartment.

Ellison would not confirm statements by Locke’s family and Crump that he had a permit to carry a gun. He said it “wasn’t relevant” to his and Freeman’s analysis and didn’t impact their decision, given that Locke was in a home and legally possessed the gun because he wasn’t legally barred from having one.

Although Locke was not named in the warrant, his 17-year-old cousin, Mekhi Camden Speed, was named and has been charged with two counts of second-degree murder in Elder’s killing.

The search warrants were carried out as part of an investigation into Elder’s death. Elder, a 38-year-old father, was found shot and laying in the street in what police believe was an apparent robbery. Drugs and money were found in Elder’s SUV, according to court documents.

The police department hired Hanneman in 2015. City records show there were three complaints made about him and that all were closed without him being disciplined, but they give no details. Data on the website of the citizen group Communities United Against Police Brutality shows a fourth complaint, in 2018, that remains open. No details were given.