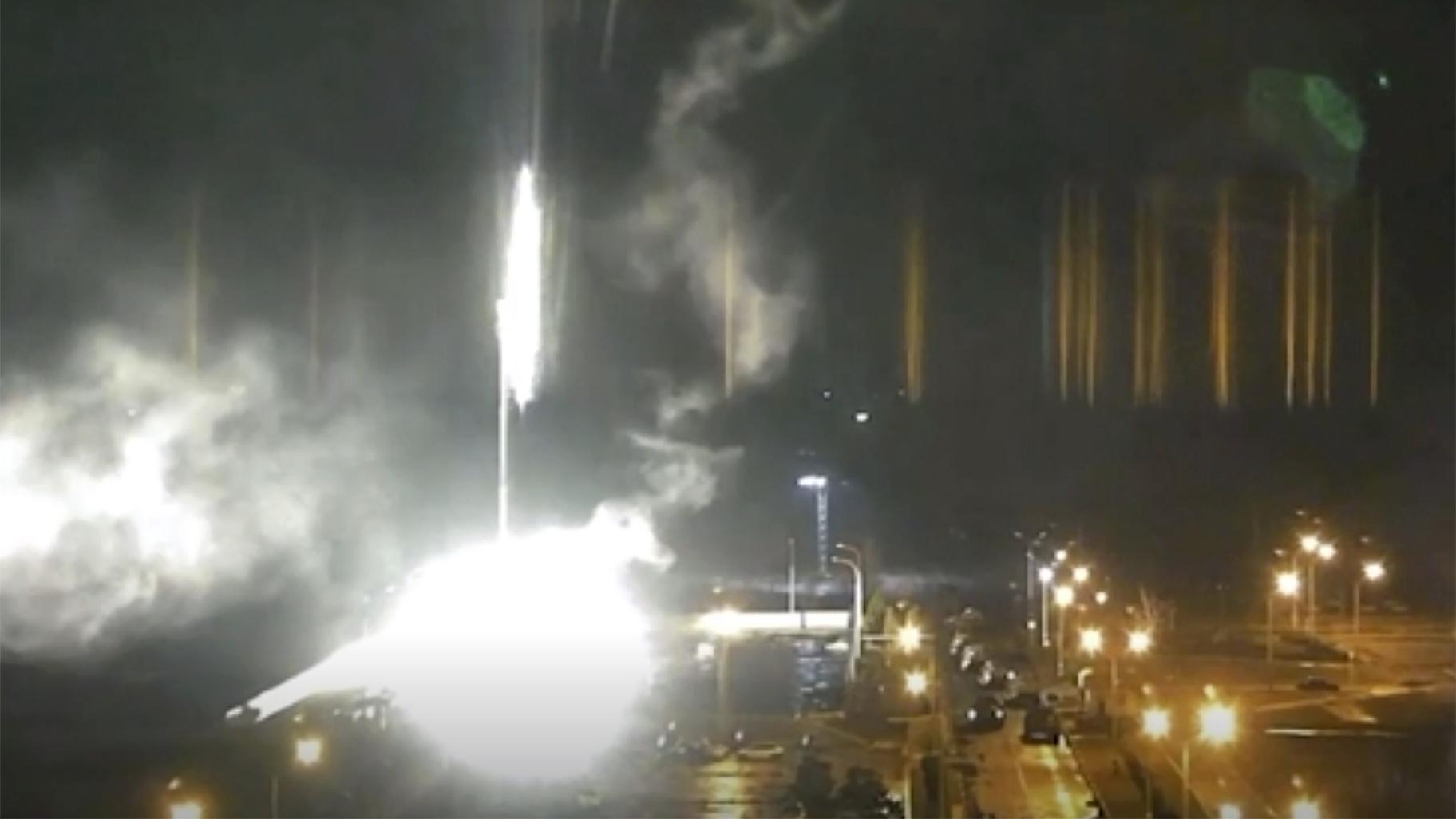 BANGKOK (AP) — Europe’s largest nuclear power plant was hit by Russian shelling early Friday, sparking a fire and raising fears of a disaster that could affect all of central Europe for decades, like the 1986 Chernobyl meltdown.

Concerns faded after Ukrainian authorities announced that the fire had been extinguished, and while there was damage to the reactor compartment, the safety of the unit was not affected.

But even though the Zaporizhzhia nuclear plant is of a different design than Chernobyl and is protected from fire, nuclear safety experts and the International Atomic Energy Agency warn that waging war in and around such facilities presents extreme risks.

One major concern, raised by Ukraine’s state nuclear regulator, is that if fighting interrupts power supply to the nuclear plant, it would be forced to use less-reliable diesel generators to provide emergency power to operating cooling systems. A failure of those systems could lead to a disaster similar to that of Japan’s Fukushima plant, when a massive earthquake and tsunami in 2011 destroyed cooling systems, triggering meltdowns in three reactors.

The consequence of that, said Ukrainian President Volodymyr Zelenskyy, would be widespread and dire.

“If there is an explosion, that’s the end for everyone. The end for Europe. The evacuation of Europe,” he said in an emotional speech in the middle of the night, calling on nations to pressure Russia’s leadership to end the fighting near the plant.

“Only urgent action by Europe can stop the Russian troops. Do not allow the death of Europe from a catastrophe at a nuclear power station.”

After taking the strategic port city of Kherson, Russian forces moved into the territory near Zaporizhzhia and attacked the nearby city of Enerhodar to open a route to the plant late Thursday.

It was not immediately clear how the power plant was hit, but Enerhodar Mayor Dmytro Orlov said a Russian military column had been seen heading toward the nuclear facility and that loud shots were heard in the city.

Plant spokesman Andriy Tuz told Ukrainian television that early Friday morning, shells fell directly on the facility and set fire to one of its six reactors.

Initially, firefighters were not able to get near the flames because they were being shot at, Tuz said.

After speaking with Ukrainian authorities on Friday, Rafael Grossi, the director general of the IAEA, the U.N.’s nuclear watchdog, said a building next to the reactors was hit and not a reactor itself.

“All of the safety systems of the six reactors at the plant were not affected at all and there has been no release of radioactive material,” he said.

“However, as you can imagine, the operator and the regulator have been telling us that the situation naturally continues to be extremely tense and challenging.”

Earlier this week, Grossi already had warned that the IAEA was “gravely concerned” with Russian forces conducting military operations so close nearby.

“It is of critical importance that the armed conflict and activities on the ground around Zaporizhzhia nuclear power plant and any other of Ukraine’s nuclear facilities in no way interrupts or endangers the facilities or the people working at and around them,” he said.

WHAT COULD HAVE HAPPENED?

The reactor that was hit was offline, but still contains highly radioactive nuclear fuel. Four of the other six reactors have now been taken offline, leaving only one in operation.

The reactors at the plant have thick concrete containment domes, which would have protected them from external fire from tanks and artillery, said Jon Wolfsthal, who served during the Obama administration as the senior director for arms control and nonproliferation at the National Security Council.

At the same time, a fire at a nuclear power plant is never a good thing, he said.

“We don’t want our nuclear power plants to come under assault, to be on fire, and to not have first responders be able to access them,” he said.

Another danger at nuclear facilities are the pools where spent fuel rods are kept to be cooled, which are more vulnerable to shelling and which could cause the release of radioactive material.

Perhaps the biggest issue, however, is the plant’s power supply, said Najmedin Meshkati, an engineering professor at the University of Southern California who has studied both the Chernobyl and Fukushima disasters, raising a concern also voiced by Wolfsthal and others.

The loss of off-site power could force the plant to rely on emergency diesel generators, which are highly unreliable and could fail or run out of fuel, causing a station blackout that would stop the water circulation needed to cool the spent fuel pool, he said.

“That is my big — biggest concern,” he said.

David Fletcher, a University of Sydney professor in its School of Chemical and Biomolecular Engineering, who previously worked at UK Atomic Energy, noted that even shutting down the reactors would not help if the cooling system failed in such a way.

“The real concern is not a catastrophic explosion as happened at Chernobyl but damage to the cooling system which is required even when the reactor is shut down,” he said in a statement. “It was this type of damage that led to the Fukushima accident.”

Ukraine is heavily reliant on nuclear energy, with 15 reactors at four stations that provide about half the country’s electricity.

In the wake of the attack on Zaporizhzhia, U.S. President Joe Biden, British Prime Minister Boris Johnson and others called for an immediate end to the fighting there.

Following a conversation with Ukrainian Prime Minister Denys Shmyhal, IAEA Director Grossi appealed to all parties to “refrain from actions” that could put Ukraine’s nuclear power plants in danger.

Shmyhal called on western nations to close the skies over the country’s nuclear plants.

“It is a question of the security of the whole world!” he said in a statement.

Ukraine is also home to the former Chernobyl nuclear plant, where radioactivity is still leaking, which was taken by Russian forces in the opening of the invasion after a fierce battle with the Ukrainian national guards protecting the decommissioned facility.

In an appeal to the IAEA for help earlier this week, Ukrainian officials said that Chernobyl staff have been held by the Russian military without rotation and are exhausted.

Grossi earlier this week appealed to Russia to let the Chernobyl staff “do their job safely and effectively.”

During fighting on the weekend, Russian fire also hit a radioactive waste disposal facility in Kyiv and a similar facility in Kharkiv.

Both contained low-level waste such as those produced through medical use, and no radioactive release has been reported, but Grossi said the incidents should serve as a warning.

“The two incidents highlight the risk that facilities with radioactive material may suffer damage during the armed conflict, with potentially severe consequences,” he said.

James Acton, the co-director of the Nuclear Policy Program at the Carnegie Endowment for International Peace, said the simple key to keeping the facilities safe was to immediately end any military operations around them.

“Under normal circumstances, the likelihood of a reactor losing power and of the emergency diesel generators being damaged and of not being repaired adequately quickly is very, very small,” Acton said.

“But in a war, all of these different failures that would have to happen for a reactor to become damaged and meltdown — the likelihood of all of those happening becomes much more likely than it does in peacetime.”

Mitsuru Fukuda, a professor at Nihon University in Tokyo and expert on crisis management and security, said the Zaporizhzhia attack raises broader questions for all countries.

“Many of us did not expect a respected country’s military would take such an outrageous step,” he said. “Now that (Russian President Vladimir) Putin has done it, not only Ukraine but the international community, including Japan, should reevaluate the risk of having nuclear plants as potential wartime targets.”