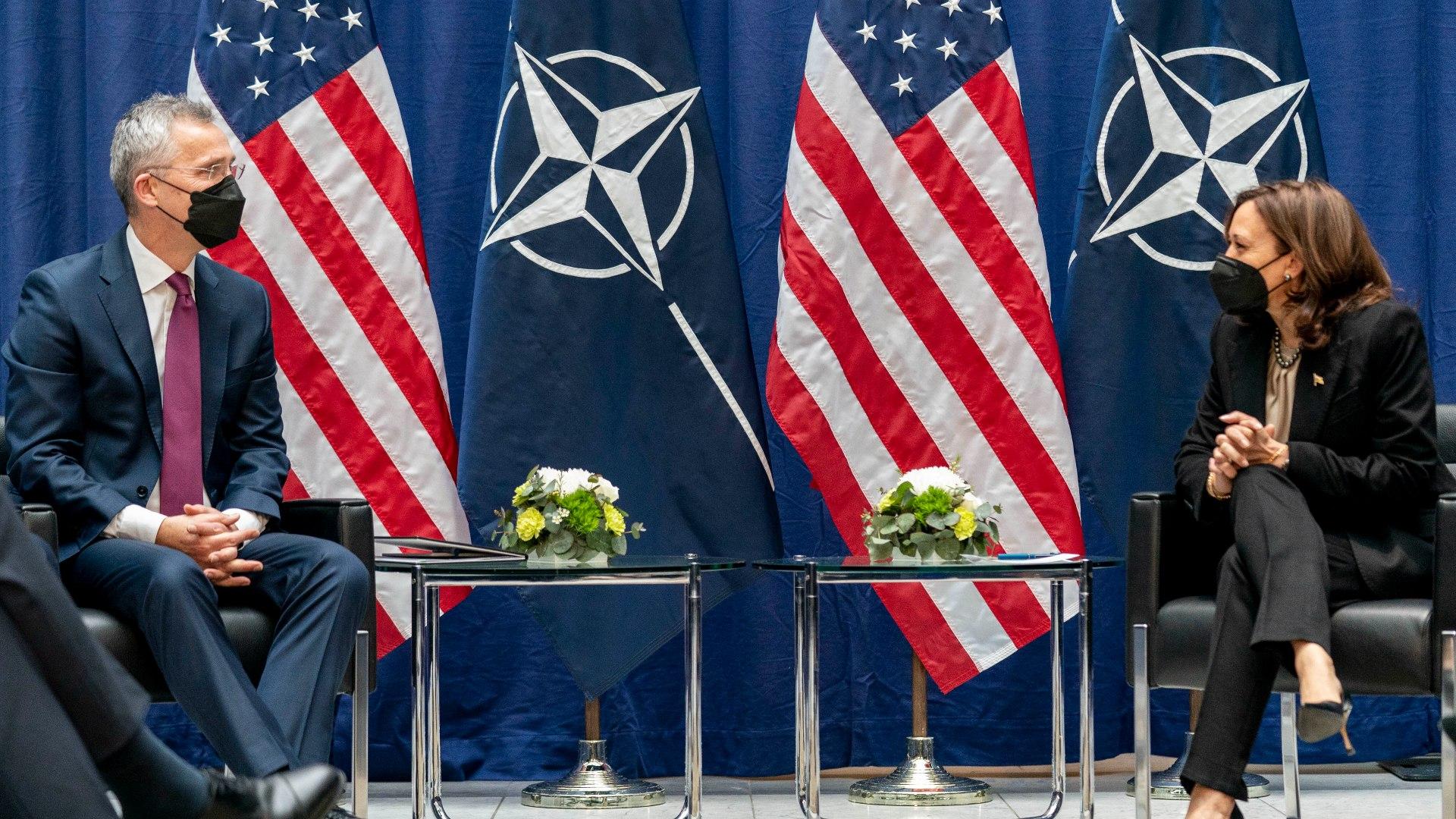 MUNICH (AP) — Vice President Kamala Harris on Friday heralded NATO unity during the escalating Ukraine crisis and warned Russia that the U.S. and Western allies stood ready to respond with tough sanctions if President Vladimir Putin moves forward with an invasion of Ukraine.

In a meeting with NATO Secretary-General Jens Stoltenberg as the annual Munich Security Conference got underway, Harris thanked the alliance for “all that you have done” throughout the crisis.

“We remain, of course, open to and desirous of diplomacy, as it relates to the dialogue and the discussions we have had with Russia, but we are also committed, if Russia takes aggressive action, to ensure there will be severe consequence in terms of the sanctions we have discussed,” Harris told Stoltenberg. “And we know the alliance is strong in that regard.”

Harris and her top national security aides huddled with Stoltenberg after President Joe Biden on Thursday in Washington warned that “every indication” suggests Russia is “prepared to go into Ukraine, attack Ukraine.”

Russia probably has massed between 169,000 and 190,000 personnel in and near Ukraine, up from about 100,000 on Jan. 30, said Michael Carpenter, the permanent U.S. representative to the Organization for Security and Cooperation in Europe.

In addition to troops along the border, in neighboring Belarus and in Crimea, he said the estimate includes Russian-led forces in eastern Ukraine and also internal security units deployed to these areas. It was unclear if these forces were included in the most recent estimate of 150,000 troops.

Harris said it was “intentional” that she was holding her first meeting at the annual security conference with NATO’s secretary general. The administration is trying to drive the message to Putin that the crisis has only bolstered the 30-country military alliance’s resolve to push back against Moscow’s aggression.

“I also welcome the fact that European allies are stepping up, also increasing their presence in the eastern border of the alliance and also investing more in defense,” Stoltenberg said. “So the reality is that North America and Europe are doing more together now that we’ve done for many years.”

U.S. and European officials are on high alert for any Russian attempts to create a pretext for invasion. Officials are concerned that increased shelling in the Donbas region, the slice of land where Russian-backed separatists have battled for years against the Ukrainian government, could be used by the Kremlin as a pretext to launch an invasion of Ukraine.

Harris underscored to the Baltic leaders, who are watching the situation on the Ukraine-Russian border warily, that the Biden administration is committed to a central tenet of the NATO alliance: the principle of mutual defense.

“Our position has always been and will continue to be that Article 5 is ironclad and the spirit behind it — an attack on one is an attack on all — remains our perspective,” said Harris, referring to the charter that spells out the mutual defense provision. “I do believe our greatest strength is our unity.”

Nauseda urged the U.S., which has bolstered its troops presence in the Baltics in recent weeks, to do even more and create a “permanent presence” in Lithuania. Currently, the U.S. deploys a small contingency of troops to the country on a rotational basis.

“I would say it is critically important for the security of our region to see more presence of United States troops,” Nauseda said.

Kallas echoed the call for a greater U.S. presence in the Baltic countries.

“We have lost our independence to Russia once, and we don’t want it to happen again,” she said.

Harris is set to deliver a major address at the conference on Saturday that will focus on the Ukraine crisis. Preparations for the address were fluid, but Harris in part is expected to spotlight the unity of NATO and Western allies in the face of the Ukraine crisis, the administration official said.

Meanwhile, Biden planned to speak by phone Friday with trans-Atlantic leaders about the Russian military buildup and continued efforts at deterrence and diplomacy.

Secretary of State Antony Blinken was also in Munich on Friday where he was meeting with his counterparts from Britain, France and Germany. Blinken is also scheduled to meet one-on-one with Qatari Deputy Prime Minister and Minister of Foreign Affairs Mohammed bin Abdulrahman Al-Thani and French Foreign Minister Jean-Ives Le Drian.