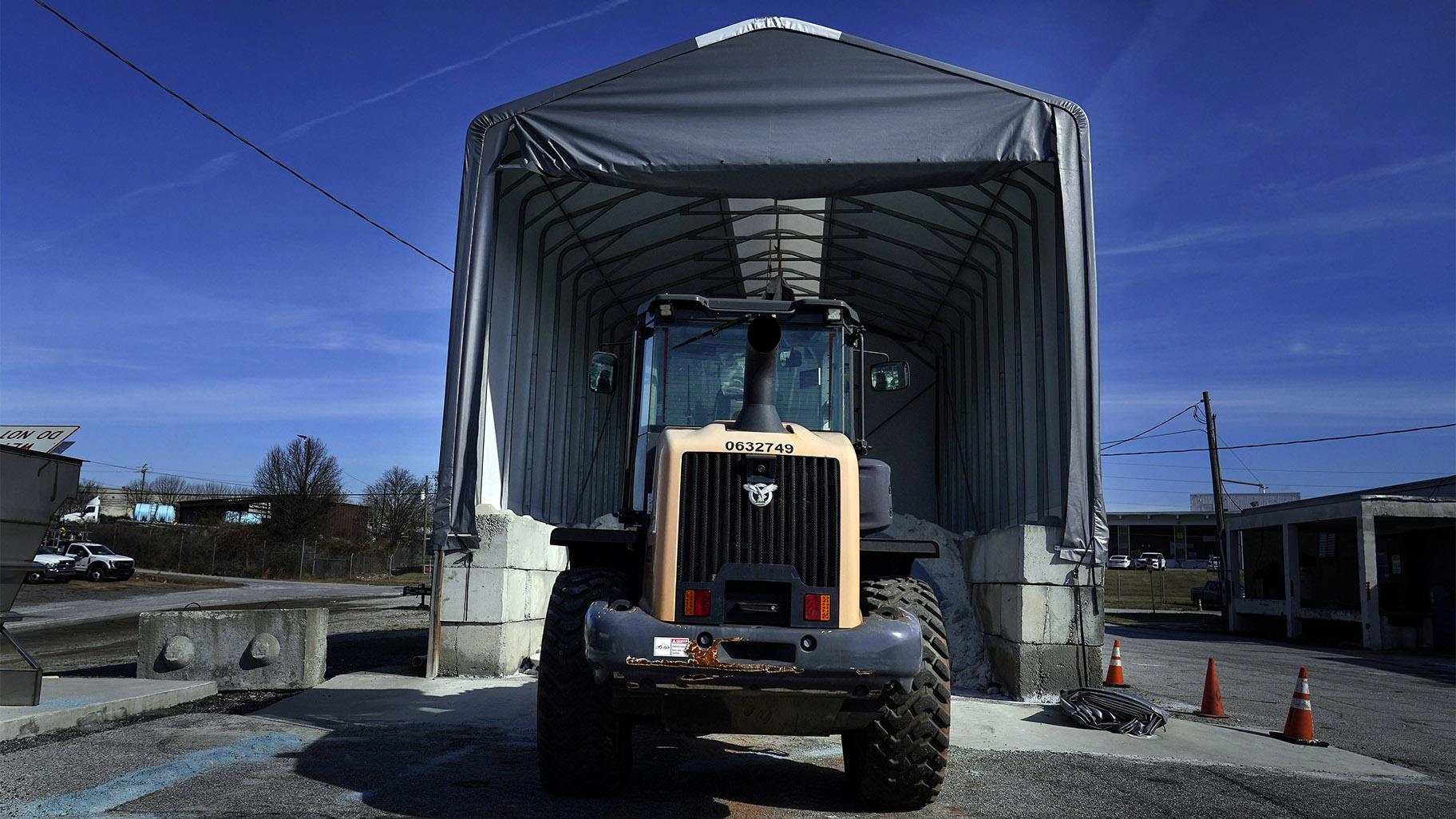 A tractor sits in front of a pile of salt used to create a brine that will help clear road of ice and snow ahead of a winter storm at the GDOT's Maintenance Activities Unit location on Friday, Jan. 14, 2022, in Forest Park, Ga. (AP Photo / Brynn Anderson)

ATLANTA (AP) — Forecasts of snow and ice as far south as Georgia have put a big part of the Southeast on an emergency preparedness footing as shoppers scoured store shelves for storm supplies and crews raced to treat highways and roads as a major winter storm approached from the Midwest.

In Virginia, where a blizzard left thousands of motorists trapped on clogged highways earlier this month, outgoing Gov. Ralph Northam declared a state of emergency and urged people to take the approaching storm seriously. In North Carolina, some store shelves were stripped bare of essentials including bread and milk.

By Friday, the fast-moving storm had already dropped heavy snow across a large swath of the Midwest, where travel conditions deteriorated and scores of schools closed or moved to online instruction. Iowa was hit the hardest. Brad Small, a National Weather Service meteorologist said the airport in Des Moines saw more than 14 inches of snow and a big swath of the central and southern Iowa recorded between 9 inches and a foot of snow.

In perhaps a preview of the kind of problems east, the Iowa State Patrol had reported that 207 motorists were assisted and 78 crashes had occurred in the four hours between 5 p.m. and 9 p.m. Friday, according to the Des Moines Register.

And in Chicago, where a mayor once lost a bid for re-election because, in part, of the city’s failure to adequately respond to a massive blizzard when he was in office, the streets and sanitation department was on Saturday morning equipping more than 200 trucks with snow plow blades to keep the streets passable during and after the expected storm.

Parts of Tennessee could get as much as 6 inches (15 centimeters) of snow, forecasters said, and northern Mississippi and the Tennessee Valley region of Alabama could receive light snow accumulations. With lows predicted in the 20s across a wide area, any precipitation could freeze, making driving difficult if not hazardous.

Travis Wagler said he hadn’t seen such a run on supplies at his Abbeville, South Carolina, hardware store in at least two winters.

“We’re selling everything you might expect: sleds, but also salt, shovels and firewood,” Wagler said from Abbeville Hardware on Friday. That region faced predictions of a quarter-inch (0.6 centimeters) of ice or more on trees and power lines, which could lead to days without electricity.

A winter storm watch extended from just north of metro Atlanta to Arkansas in the west and Pennsylvania in the north, covering parts of 10 states including Kentucky, Ohio and West Virginia. Travel problems could extend into metro Atlanta, where about 2 inches (5 centimeters) of snow brought traffic to a slip-sliding halt in 2014, an event still known as “Snowmaggedon.”

A mixture of ice and up to an inch (2.5 centimeters) of snow is expected in Atlanta, according to an advisory issued Saturday by the National Weather Service.

At Dawsonville Hardware about 60 miles (95 kilometers) north of Atlanta, owner Dwight Gilleland said he was already out of heaters by noon Friday and only had five bags of salt and sand left.

“I think the pandemic has made people more anxious than normal,” he said.

Nearly 1,000 flights within the U.S. have already been cancelled for Sunday in anticipation of snow and ice in the South, according to the flight tracking site flightaware.com, which tracks flight cancellations worldwide. A major U.S. airport hub for American Airlines – Charlotte Douglas International Airport in North Carolina – leads the list of cancellations for Sunday at U.S. airports.

Possible power outages and travel problems could be exacerbated by any coating of ice — and winds gusting to 35 mph (55 kph), the National Weather Service said.

“Hopefully, the storm will underdeliver, but it could overdeliver. We just don’t know,” said Georgia Gov. Brian Kemp as he announced storm preparations. He was taking no chances as he declared a state of emergency and crews began treating major roads and highways in north Georgia.

“There is a potential for very dangerous conditions caused by accumulations of ice and snow, which will likely result in power outages across the state,” he said.

The city of Winston-Salem, North Carolina, had to borrow workers from other departments to help treat roads ahead of the storm because COVID-19 had caused a shortage of workers, spokesman Randy Britton said. Even volunteers pitched in to help as the city stepped up its normal schedule of preparing for winter weather, he said.

North Carolina Gov. Roy Cooper signed an emergency order and the administration urged people to stay at home once the storm hits. The state highway agency warned that labor shortages meant crews might not respond to problems areas as quickly as normal.

The storm, after its expected weekend dip into the Southeast, was then expected to head into the Northeast while dropping snow, sleet and rain around the densely populated Eastern Seaboard.

Many schools and businesses will be closed Monday for the Martin Luther King Jr. holiday, which could help reduce travel problems along with temperatures that are supposed to rise into the 40s.